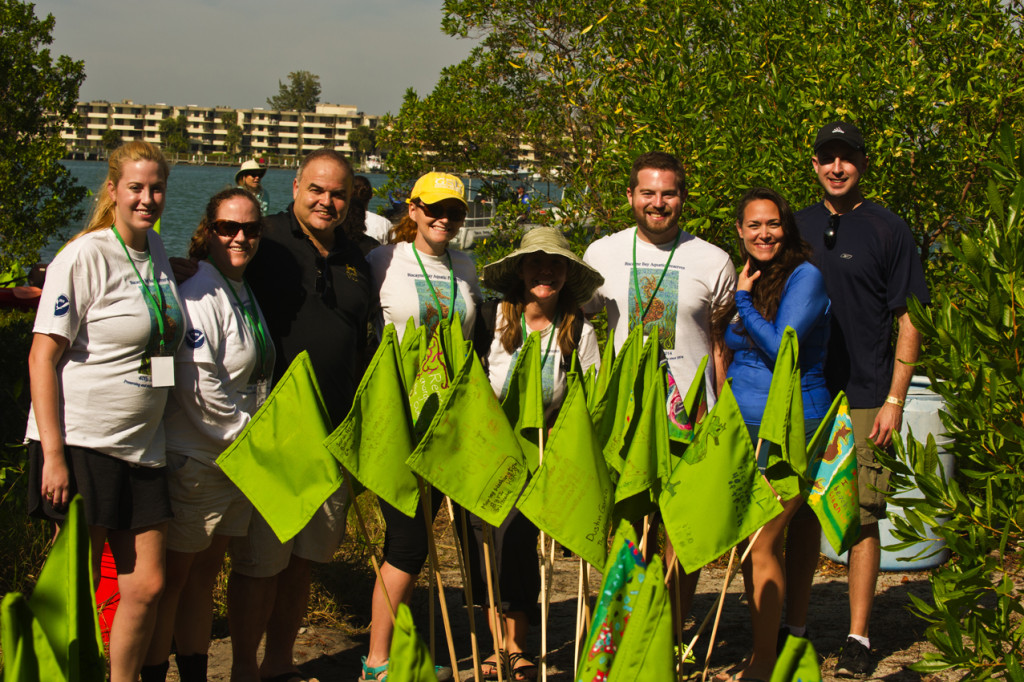 Seahorse Society is a participatory eco-art project initiated in 2015 and led by artist Xavier Cortada at Helker’s Island in Biscayne Bay. The project was an attempt to have participants celebrate the bay and pledge their own personal eco-action for the stewardship of the aquatic preserves – actions accomplished through a ritualistic performance driven by the installation of a multitude of painted flags referencing their own respective pledges to the environment. The entirety of the project was not only an attempt at environmental awareness and conservation, but a commemoration of the Biscayne Bay Aquatic Preserves’ 40th Anniversary, created in 1974 to protect Biscayne Bay’s living waters and natural ecosystems. An integral part in the continued sustainability of these preserves is seagrass, an underwater plant that provides sustenance and habitats for a variety of aquatic life. Currently, an estimated 90% of seagrass in parts of the bay are being destroyed due to anthropocentric actions. Seahorse Society uses this issue as the focal point of its intent, to promote an understanding of how human actions on land can directly impact the integrity of the bay.

Seahorse Society required a large amount of involvement from the community to succeed, from schoolchildren incorporating their own artwork into the project (Cortada’s Littoral Creatures project) to community members engaging in the performance. Participants were instructed to trek across a three-mile expanse of water to reach Helker’s island, the usage of paddleboards, kayaks, canoes being the methods of choice. Upon reaching the island, individuals were greeted by lines of painted flags, floating in the water and eventually crossing the shoreline. Each flag was unique, painted by schoolchildren from around the county, with a depiction of a seahorse along with an eco-action pledge written across it. These pledges were small in nature, some as simple as pledging to use less electricity, but combined could have a large footprint. Participants would then choose a flag that they resonated with, performing a ritualistic action in which they gathered in a circle, each making their own environmental pledge to protect Biscayne Bay.

As with much of Cortada’s work, there are many components and features present in Seahorse Society that can be seen within other projects by the artist. Notably in this instance is Cortada’s installation of flags as a conceptual marker recognizing the interconnectedness of land and water, the flags literally marking the point at which the land meets the water. There is also the ritualistic process the participants undergo, a performance that incorporates a sense of community and engagement throughout. This type of reaction is brought on by having a large participatory base, individuals that have been sublated into group thought and action. By having his participants behave in such a way, Cortada forces them to reframe the way they interact with the natural environment as well as prompting actual responses to the issues being faced. This is where the success of Seahorse Society lies, in its ability to draw environmental empathy from its participants through its processes.