On exhibition at the University of Miami Wynwood Gallery 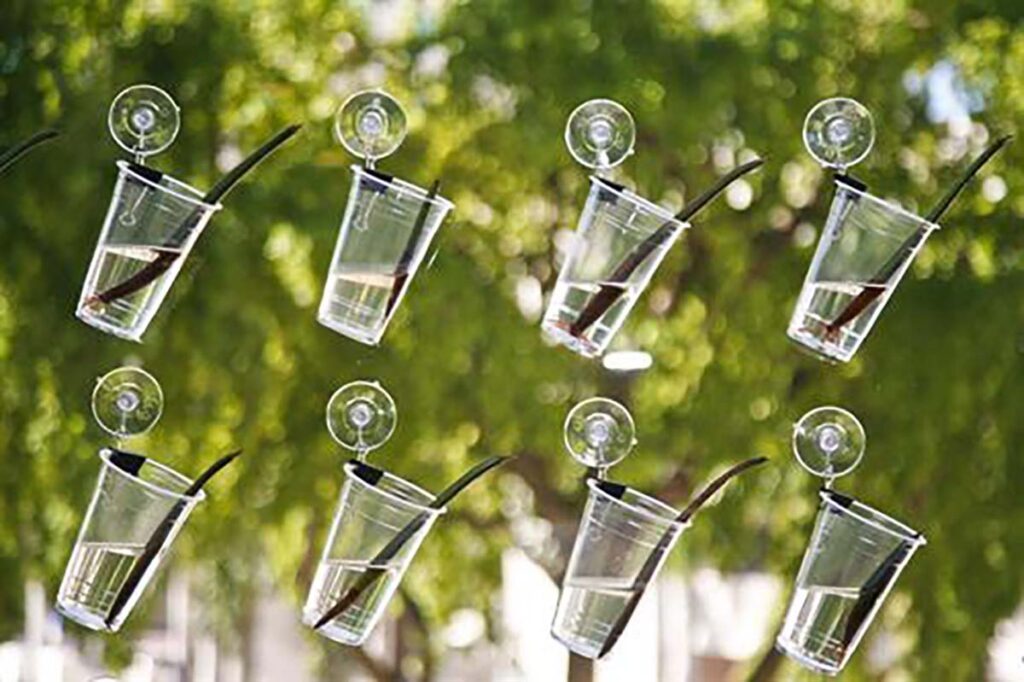 On exhibition at the University of Miami Wynwood Gallery

When Cortada first witnessed a violent uprooting of mangrove forests in the Florida Keys in 2006, he became motivated to take action and protect these native habitats. He launched the Reclamation Project on Earth Day 2006 at the Bass Museum, working with volunteers to collect propagules and install them in grids of clear, water-filled cups in storefront windows along Lincoln Road, Alton Drive, and Ocean Drive in Miami Beach. As the propagules matured, they were returned to the water’s edge and planted ritually with volunteers repeating the phrase: “I hereby reclaim this place for nature.”

In using arts and culture to build community, we often forget that the greatest resource isn’t necessarily the program we design, or the object we create, or the idea we generate. It is the people themselves.”

15 Years of Reclamation Project, an exhibition by Professor of Practice Xavier Cortada, presents a long-lived ecological art intervention across the state of Florida. Over the last quindecennial, Cortada has engaged scores of Floridians in learning about and addressing the widespread disappearance of native vegetation. The Reclamation Project also lives on today through subsequent iterations in Native Flags, Underwater HOA, Plan(T), FLOR500 and Flower Force, encouraging locals to restore native habitats as coastal cities like Miami plan for a future with rising seas.

Endangered Species: Artists on the Front Line of Biodiversity 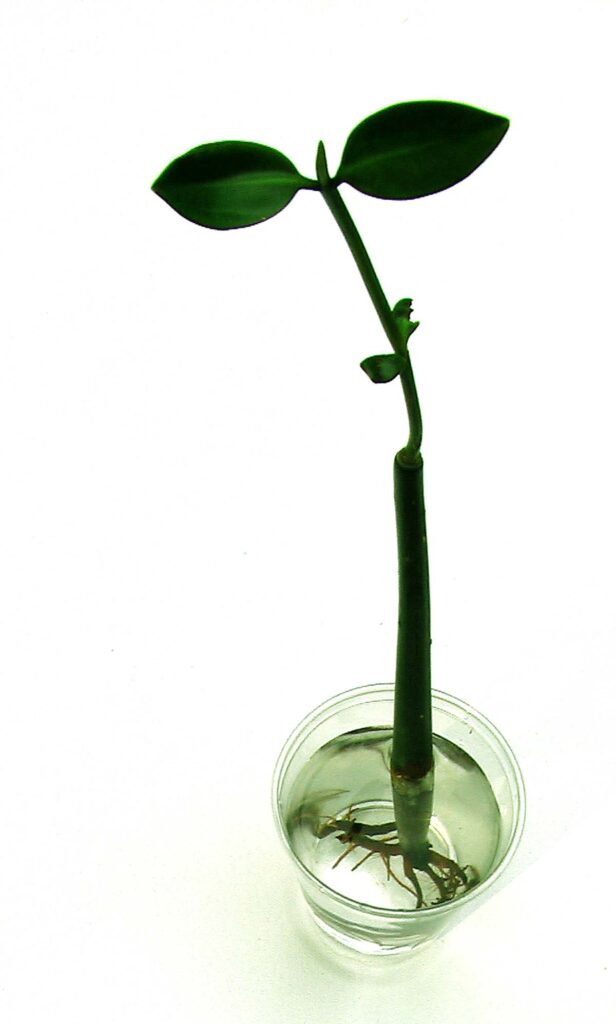 When Cortada was a child, he was fascinated by the peculiar shape of the mangrove seedling that he would see during his family’s trips to Bear Cut in Key Biscayne. These seedlings propagate while still attached to the parent tree. They can grow up to a foot long, then release into the water the parent tree is growing in, floating around with the tide. Eventually, the seedling becomes so inundated with water it settles on the shoreline and roots, sometimes miles away from it’s parent tree.

“Florida Mangrove” and “The Journey” were Cortada’s earliest depictions of mangroves in his artwork in 2003. They were commissioned by the Division of Cultural Affairs for exhibit in the Florida Capitol as part of the Governor Jeb Bush’s 2003 Hispanic Heritage Month celebration. Cortada created “The Journey” to compare the journey of the immigrant to a mangrove seedling’s journey before it settles its roots and thrives in a new community. In “Florida Mangrove,” he illustrates the moment Juan Ponce de Leon landed on Florida’s shores, changing the state’s landscape and native habitats like mangrove forests forever. 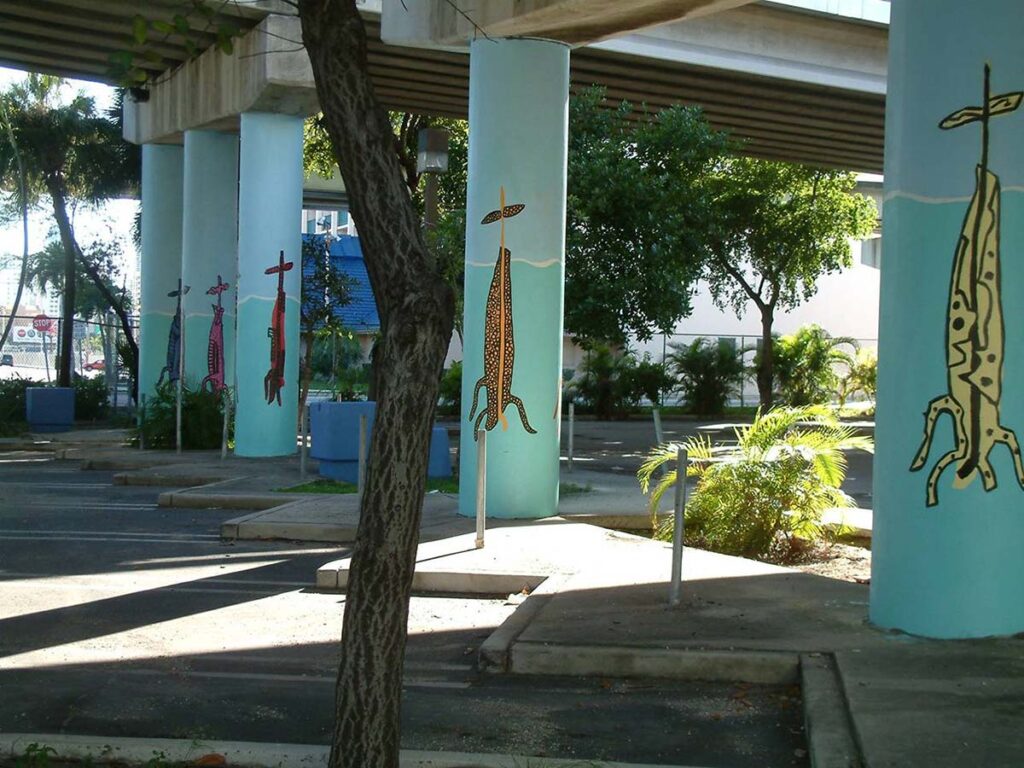 The City of Miami asked Hands on Miami, a not-for-profit whose mission is building community by engaging people in volunteer service, to help its Neighborhood Enhancement Team (NET) offices beautify the Interstate’s underpasses in the Downtown and Little Havana neighborhoods, as well as a flyover in the Allapattah neighborhood. Hands on Miami turned to Xavier Cortada to design artwork for the sites in a way that would make the entire project a cohesive and uniform art piece.

Cortada chose the image of the mangrove tree as the centerpiece of this project to transform the clammy, dingy and dark places beneath Miami’s highways. Cortada decided to recreate the underpass’ natural environment when the first European settlers arrived: a mangrove forest.

Miami is a young City. Instead of painting a full grown forest, Cortada chose to portray the mangrove early in its lifecycle of growth: a sea of floating seedlings readying to set their roots. Mangrove seedlings serve as a metaphor to honor the people who made the journey to Miami, set their roots, and worked to build community.

“We’ve all come from different places to make Miami our home,” said Cortada, “much like a mangrove seed washes up and takes root on a Florida sandbar and helps build new land where new life can take hold.” 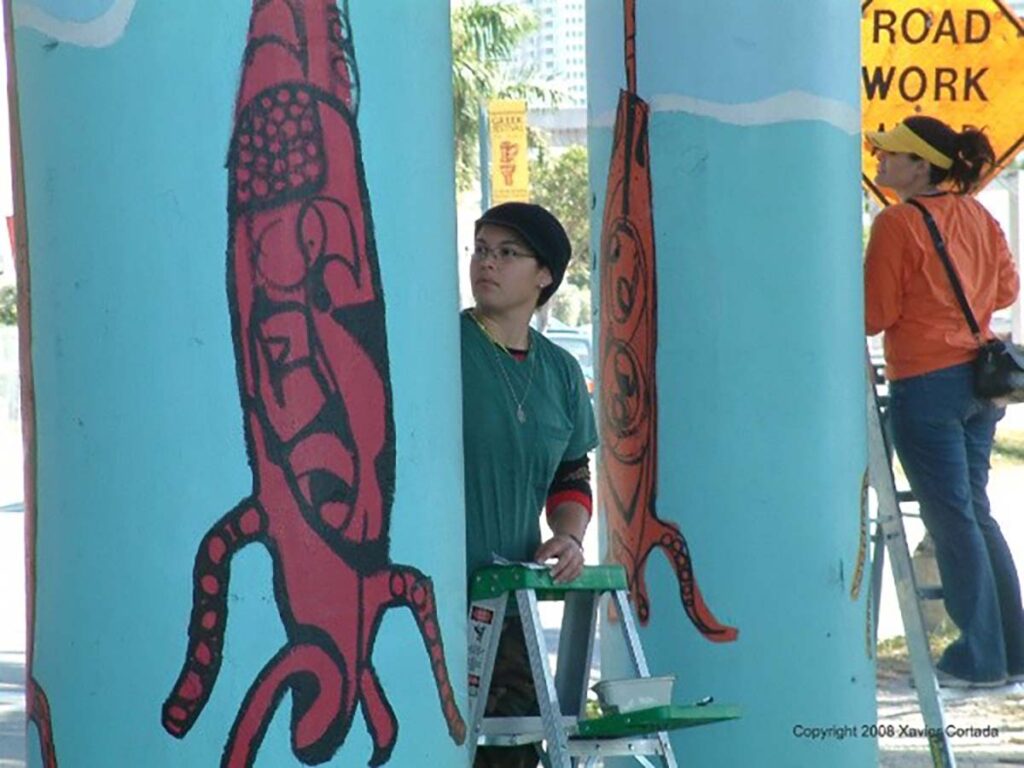 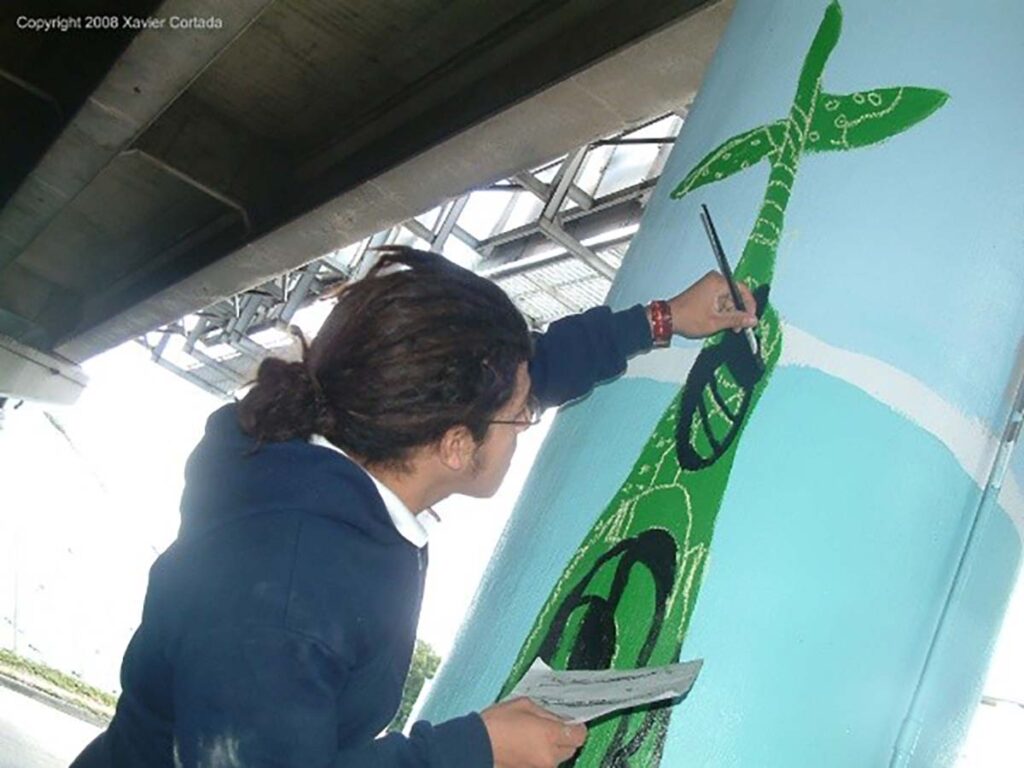 “Having this painted forest’s roots spread across these different neighborhoods, depicts our interconnectedness,” stated the artist, “by reaching out to others, we build a stronger community, much like the walking feet of mangrove roots do to build formidable structures and nurture new life.”

Indeed, that is what hundreds of volunteers did on Hands on Miami Day 2004, when they began the transformation of what were once blighted areas. Using 8 foot by 4 foot stencils designed by the artist, Hands on Miami volunteers painted three mangrove seedlings on each of the underpass’ columns. Each seedling was painted in one of 18 colors. The areas around each seedling were painted in blues to simulate the sea and sky. Students from Miami International University of Art and Design then returned to the downtown site to work on the colored seedlings. Using black paint they executed unique drawings Cortada created for each and every seedling.

Together, hundreds of volunteers came together to help transform the neighborhoods into works of art. Using paint, they planted these unique seedlings that will grow into the Miami Mangrove Forest and inspire others to reach out to other neighborhoods in building a stronger Miami.

Portraying the natural world in urban spaces is also important because it reminds us of what was here before all the concrete was poured. As generations and growth transform Miami, we as a people are grounded by nature, the one constant in this ever changing city.

Following Miami Mangrove Forest, Cortada continued with his usage of the mangrove as a form of symbolic iconography, leading to a more conceptualized understanding of the imagery’s relevance toward the Miami community. This can be seen in the subsequent OMNIART exhibitions, OMNIART I in December 2004 and OMNIART II in January 2005, that occurred during Art Basel.

While the OMNIART exhibition(s) initially had the primary purpose of exhibiting the pictures of mangrove propagules Cortada drew for use in the creation of his Miami Mangrove Forest, they became a departure point for future socially engaged works within the artist’s concentration. Within the setting of the white cube, Cortada was able to acknowledge the significance of his iconography through its own presence, deploying nature in the context of urbanicity. This was done quite literally, actual mangroves arranged on a column, standing sentinel in the middle of the gallery space. 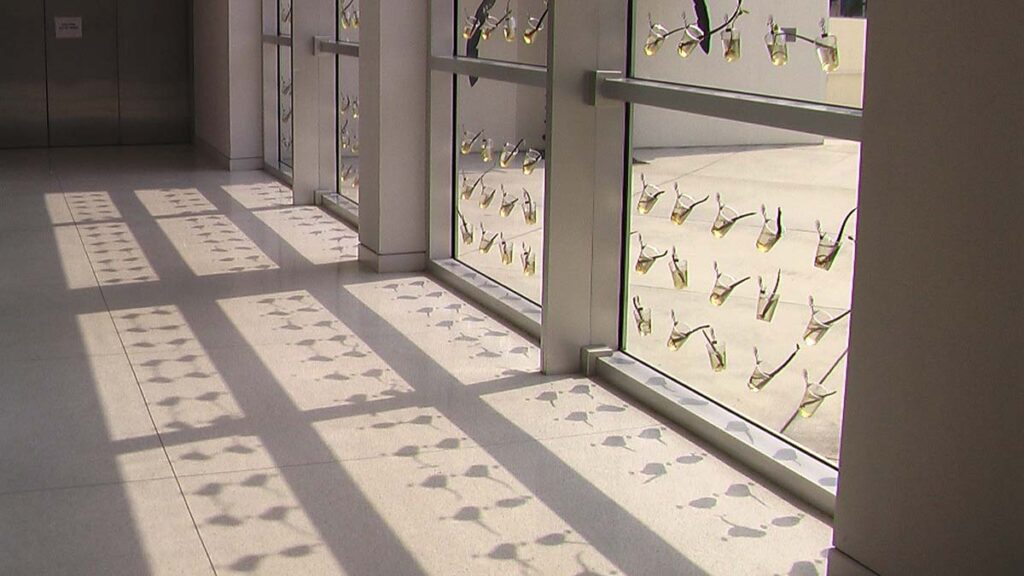 On Earth Day 2006, Miami artist Xavier Cortada launched this eco-art intervention during the opening of a month-long installation at the Bass Museum of Art with 252 red mangrove seedlings.

Launched in 2006, Xavier Cortada’s Reclamation Project has since evolved into a continuous eco-artwork that has influenced the direction and methodology of the artist’s greater social practice. The origins of the project stem from Cortada’s experiences in the Florida Keys; the artist witnessed firsthand the destruction and upheaval of native mangroves across an 18-mile stretch, a violent act which necessitated an invigorated public response.

Cortada was introduced to the symbolic aspects of the mangrove early in his childhood, his understanding of the plant inspired by his Cuban heritage as well his family’s trips to Bear Cut in Key Biscayne. The usage of the mangrove imagery was first seen in the artist’s work as early as 2003 as a metaphor for the immigrant, Cortada imagining the plant’s seeds floating to a new shore, putting down roots, and beginning a new community. The mangrove was also used as the central imagery of Miami Mangrove Forest, a 2004 public art project that utilized murals to inspire thoughts of a metaphoric reforestation of downtown Miami. However, after growing increasingly concerned about the impending doom of climate change, Cortada’s perspective towards environmental issues began to shift from that of traditional artist to social practitioner.

While the Reclamation Project, in its original state, eventually ended, Cortada continued to address issues of social/cultural/environmental importance through this newly developed methodology, building upon relationships made during the campaign to introduce works such as Plan(T), Underwater HOA, and Native Flags. Plan(T) in particular can be seen as a natural evolution from its predecessor, though its conceptual output relies on a visualization of an inevitable future rather than an urban reforestation effort.

The Reclamation Project survives today as a point of departure for Cortada’s practice, the work ushering in a process of community engagement and infiltration that has evolved continuously over the years. This is due in no small part to the artist’s long-standing role in his community, the 15-year anniversary of the project marking an environmental and cultural commitment to South Florida and its people. 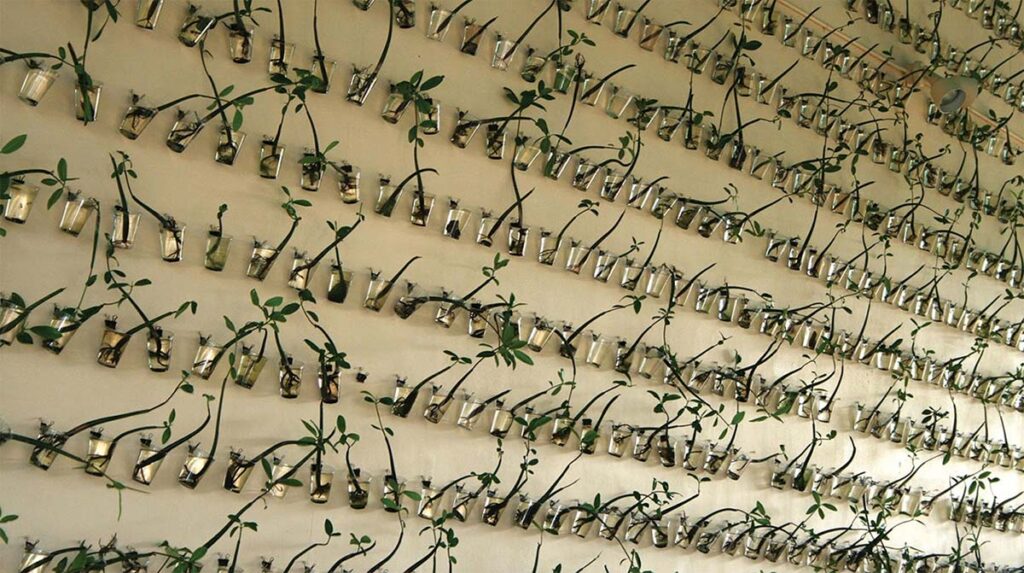 Since its inception, the Reclamation Project has been exhibited across the United States at: 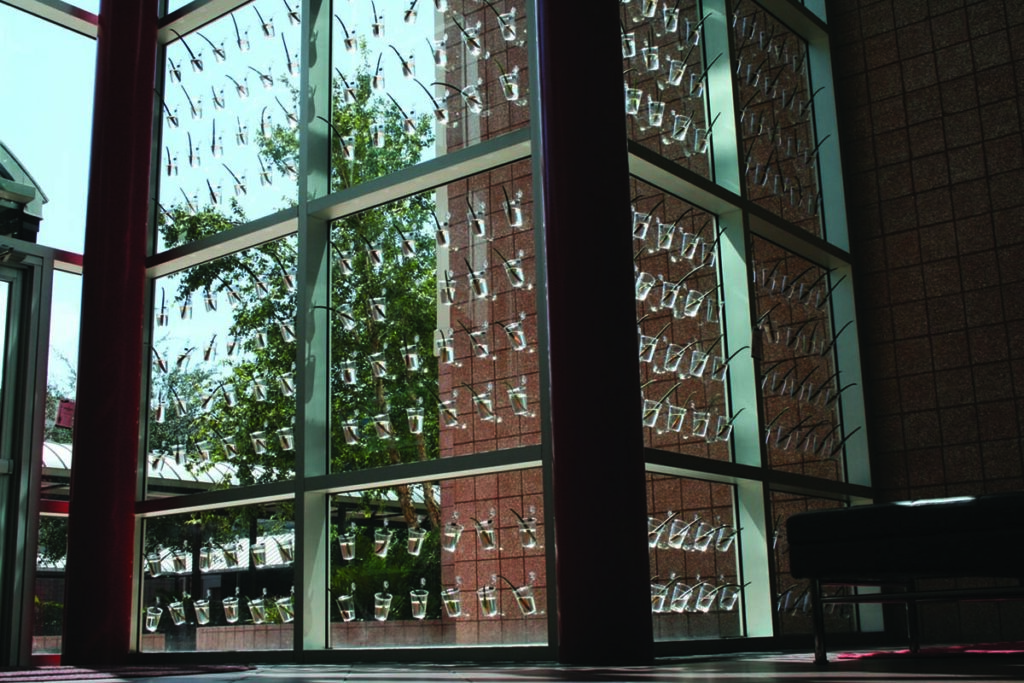 Cortada’s installations were created as modernist grids to resemble a cityscape. Man-made objects (cups and clips) are used to create rows and columns representing streets and avenues and placing mangroves in the installation models the idea of putting nature back into our built environment. Xavier Cortada “Reclamation Project,” 400 mangroves in clear, water-filled cups, Tampa Preparatory School, Tampa, FL. 2009.

ENDANGERED SPECIES: ARTISTS ON THE FRONT LINE OF BIODIVERSITY

“The Reclamation Project is Xavier Cortada’s response to the loss of Florida’s mangrove trees. His eco-artwork revitalizes mangrove forests, one of Earth’s most biodiverse ecosystems. Working with botanists, Cortada began collaborating with Miami merchants, who raised twenty-five hundred red mangrove seedlings and displayed them in storefront windows for a year. Community volunteers then planted the seedlings along the barrier island of Key Biscayne. Similar collaborations in other locations followed, including in the nearby Virginia Key featured in this photograph and accompanying video by Bill Bilowit.

Unique to salt water swamps between land and sea, mangrove trees shelter a wide range of animals. Seventy-five percent of all tropical fish are born among the extraordinary roots of mangrove forests. Mangroves also protect humans from the flooding and coastal erosion caused by hurricanes. By filtering toxins, mangroves are essential for the health of threatened coral reef ecosystems.

Mangrove forests are found only along the world’s tropical coastlines. Drained for development, stressed by pollution, and cut down for fuel and lumber, they are among the most threatened habitats on Earth. The last decade alone saw destruction of 35 percent of the world’s mangroves1. 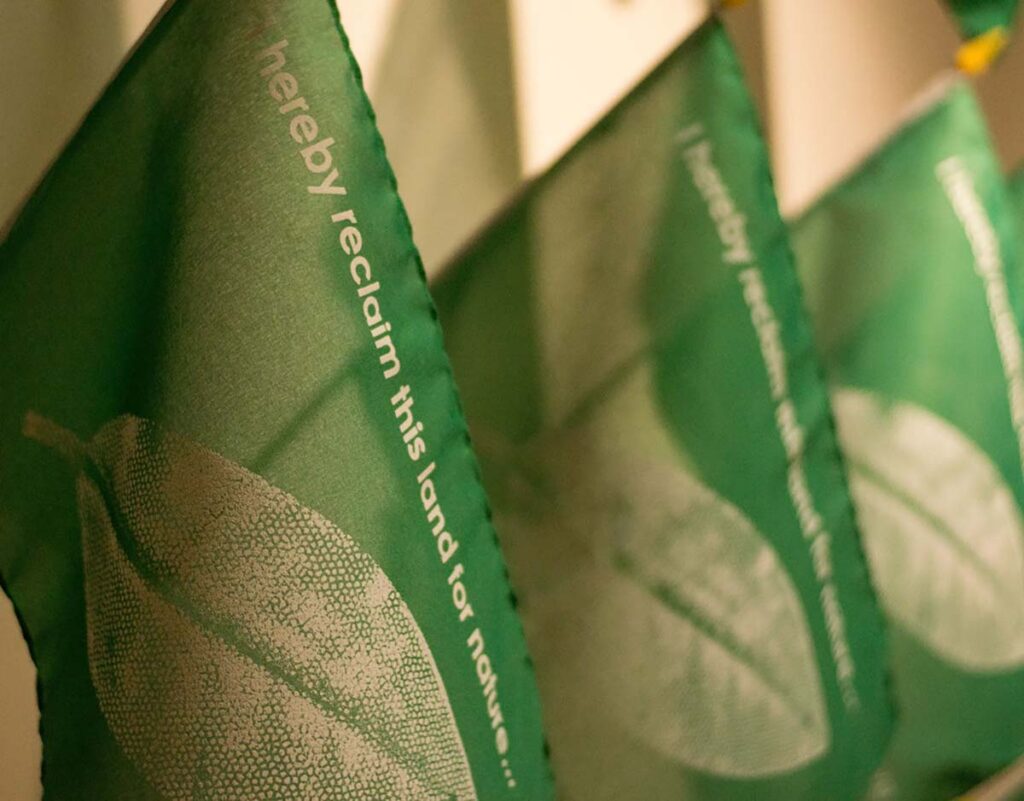 LEARN MORE ABOUT THESE PROJECTS 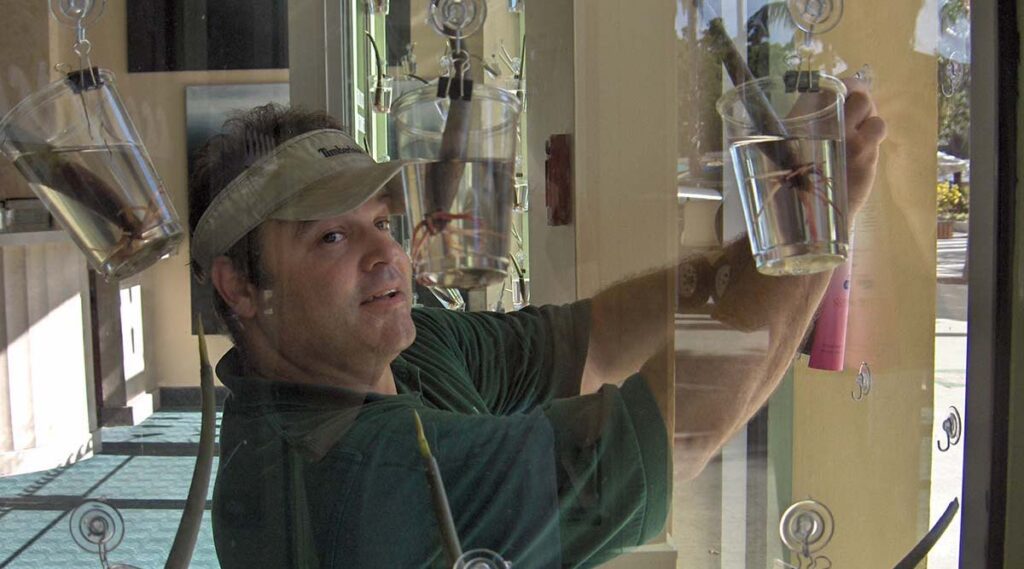 Xavier Cortada is an artist and Professor of Practice at the University of Miami. Particularly environmentally focused, the work Xavier Cortada develops is intended to generate awareness and action towards issues of global climate change and social justice. Over the past three decades, the socially-engaged artist has created art at the North and South poles and across 6 continents, including more than 150 public artworks and dozens of installations, collaborative murals and socially engaged projects.

Cortada was born to Cuban exiles in Albany, New York and grew up in Miami from the age of three. He holds three degrees from the University of Miami: Bachelor of Arts, College of Arts and Sciences (1986), Master of Public Administration, Miami Business School (1991) and Juris Doctor, School of Law (1991). Learn more about Xavier Cortada at cortada.com.