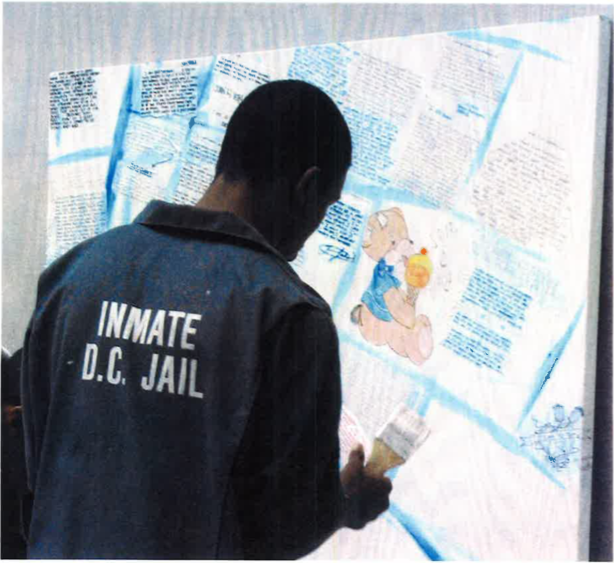 This online exhibition exploring children direct filed In adult court takes Xavier Cortada’s ARTCARE 2021 as a point of departure. It was developed in partnership with U-LINK (the University of Miami’s Laboratory for Integrative Knowledge), the Office of the Public Defender Carlos Martinez and the African Heritage Cultural Arts Center as part of the Socially Engaged Art in Law course Xavier Cortada is co-teaching at the University of Miami School of Law with its Children and Youth Law Clinic Director, Professor Bernard Perlmutter. Students from both the University of Miami and the African Heritage Cultural Art Center contributed to this exhibition.

Centuries ago, children who committed crimes were treated as adults. As a result, children as young as seven years old could be tried and sentence as adults, and even put to death. Throughout the 1800s, reformers worked to establish the importance of a separate court for young offenders. This resulted in the first juvenile courts being established in the late 1800s. The goal of juvenile court is to focus on the rehabilitation of children who commit crimes, rather than punishment.

A vast majority of the criminal justice system is centered around the crimes and offenses committed by adults. Although juvenile courts remain intact throughout the United States, there are a several of ways a child can be tried and sentenced as an adult. Some states impose a statutory exclusion if certain conditions within a case are met, such as, a child being a repeat offender, reaching the age of majority, or committing a serious crime like murder. In other states, judicial waivers leave this decision to the discretion of the judge. Lastly, Direct filing gives prosecutors the choice to file children as young as 14 directly into adult court without an opportunity for a hearing.

The direct filing of children into adult court has been a long contested and highly controversial practice in the United States criminal justice system. Statutes allowing this practice to exist have been escalated up to the United States Supreme Court. The Court determined that children are mentally, physically, and constitutionally different than adults therefore children who commit crimes should be treated differently than the adults who commit the same or similar crimes. As a result, a series of changes have been implemented surrounding this hot button topic. While many states have done away with the archaic practice, fifteen states still have statutes that enforce various forms of these statutes, including Florida. Florida is a leading state with one of the highest numbers of children being charged as adults.

This pathfinder is meant to provide people who are interested in learning more on this topic with a series of resources ranging from statutes, cases, law review articles to reports and news articles.