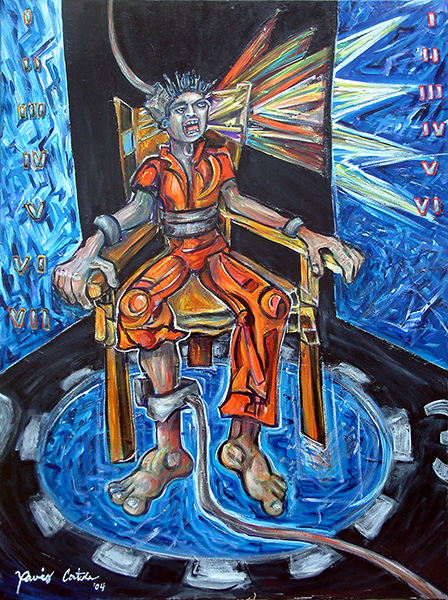 This chapter examines Xavier Cortada’s depiction of Proffitt v. Florida, the 1976 decision that approved Florida’s guided discretion statute after Furman v. Georgia had invalidated the death penalty in 1972. Cortada’s depiction is a fantastical piece, capturing the horror of death by electrocution set against two columns of ominous looking Roman numerals. The Roman numerals represent the mechanical imposition of death—the formulaic approach to death penalty decision-making that tells sentencers to add the columns of aggravating and mitigating circumstances and see where the balance lies. Cortada resists this approach as obscuring the human element in death penalty decision-making, the awesome responsibility of sitting in judgment over another human being’s life. This chapter explores Cortada’s key insight, how we numb ourselves with numbers, then turns to the visual inspiration for Cortada’s piece—a painting of a screaming pope by Francis Bacon. Bacon’s pope was not a comment on the death penalty, but the themes he was exploring—pain, imprisonment, isolation, and obfuscation—are eerily apropos of the death penalty as well. Both works of art are a comment about distortion and both have something important to say about how the law and institutional design work to distort death.

“Cortada’s depiction of Proffitt v. Florida could not possibly capture all of these distortions. But what it does capture is perhaps the most important distortion of all – The humanity that is lost when we let legal formulas dictate the decision between life and death. That is the decision that most matters; it is a decision that triggers the machinery of death. Cortada forces us to see this decision more clearly.”