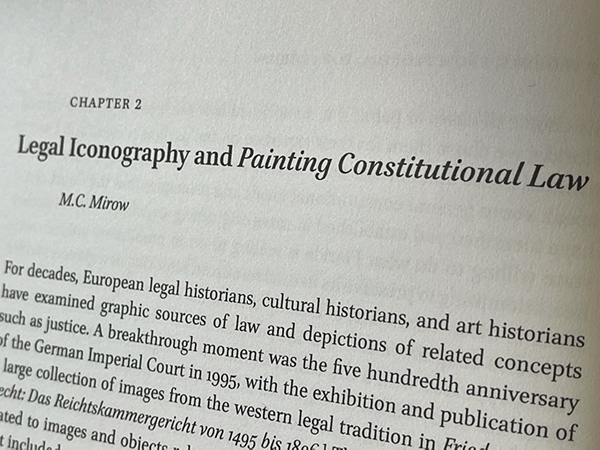 Predominantly a European phenomenon, the study of legal iconography has expanded to the common law world and informed approaches to Anglo-American legal development. European painting, sculptures, and other artwork were used in forensic settings to channel behavior of judges, lawyers, and litigants. Such artwork often combined religious perspectives, such as depictions of the Last Judgment, but might also reflect more secular notions such as Justice. Cultural historians and theorists have supplemented these traditional approaches by expanding the scope of the analysis of the relationship between image and law. This book continues these scholarly efforts. It is, in essence, a study of legal iconography at ground level. The viewers, interpreters, and expositors of Cortada’s paintings are constitutional scholars rather than historians or theorists of law, art, or culture. This work analyses common law materials, constitutional cases, and the depiction of specific cases in twenty-first century artwork. It illustrates the potential for legal iconography to offer deeper insights into law, legal institutions, justice, injustice, and legal change in modern society.

M.C. Mirow is Professor of Law at Florida International University. He holds a J.D. from Cornell University and Ph.D.s from Cambridge and Leiden Universities. He is the author of Latin American Constitutions (2015) and Florida’s First Constitution (2012).