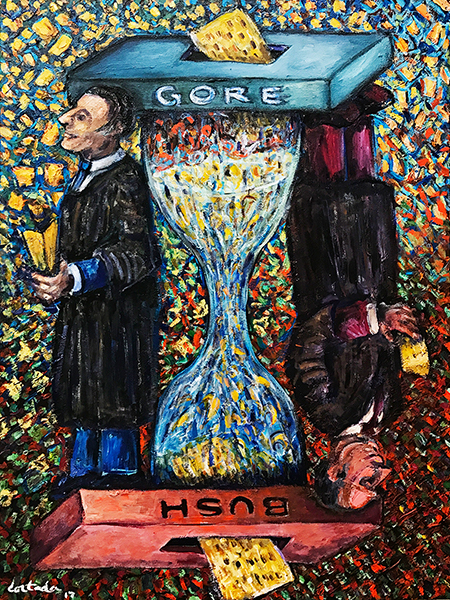 In painting the hourglass at the center of the work, I wanted capture the crucial element of time as it applied to the 2000 presidential election.  Time ran out to count the all the ballots in Florida (the state whose electors would decide the outcome between Bush v. Gore).  So the Supreme Court chose to tally nine ballots instead: Theirs.

The hourglass with ballots swirling inside captures that moment, but it also serves as an instrument to measure the passage of time as American democracy continues to (d)evolve.  The hourglass is the perfect metaphor for the chaos to come.  A nation that grows more and more polarized, a democracy that becomes more fragile with the passage of time.

In my painting, the hourglass also highlights what can happen when you attempt to the measure the strength of American democracy – the resolve of its people– in a vacuum.  Outside the hourglass-turned-ballot-box chamber is a world that isn’t part of the vote-counting calculus.   There is a sea of votes casts — hanging chads, butterfly ballots; votes  that will never be counted. But these ballots don’t matter.

All that matters is what is inside the chamber of the hourglass— its constricting (disappearing) middle cleaves it into two.  Two partisan chambers, each intent in upturning the other’s world in order to achieve domination and control.

Here two Supreme Court justices, each standing by and branding the colors of their partisanship, are looking to a universe of ballots that were cast in Florida on November 8, 2000.  Both know that imperfections in the voting process make any result other than hand counting every single ballot suspect.

The state courts, charged with overseeing the election had an option of how to make sure that all votes are counted.  Those who disagreed with their decision felt the outcome is predetermined.

The arbiters of truth were tasked with making a decision.  In Bush v. Gore, the five Republicans on the Supreme Court decided that the clock had run out on the vote counting in Florida.  They effectively selected the Republican nominee as the 43rd president of the United States.  With only nine votes in the chamber, the tally was easier to count.  It was 5 to 4, along party lines.