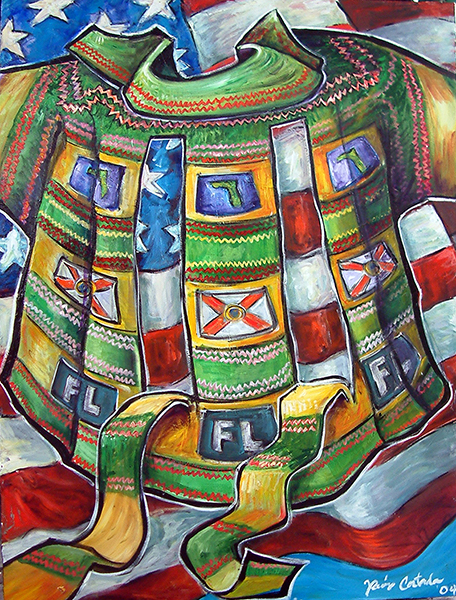 Back in law school, I remember my Constitutional Law professor warning us to look out for 11 th Amendment cases. They were the new ones to watch in the legal landscape.

Five years after I graduated, the Supreme Court handed down Seminole Tribe v. Florida 517 U.S. 44 (1996), an important Eleventh Amendment ruling regarding all states as sovereign entities. I thought to paint it.

In this case, the Seminole Tribe (represented by the green Seminole jacket) brought suit before the federal court (represented by the American flag) against the State of Florida for violating a requirement of the Indian Gaming Regulatory Act. The act allowed the tribe to engage in gaming (i.e., casino gambling, slot machines). The case worked its way up the Supreme Court, which held that sovereignty under the Eleventh Amendment (depicted by the two vertical tears created on the jacket) inherently implies that states may not be sued by parties without their consent.

The ripped jacket reveals the façade of a slot machine — showing three rows of repetitive symbols. Jackpot! And the winner as … The Sovereign State of Florida.

As an aside: It is no secret that the drafters of the Eleventh Amendment had no love lost for Native Americans, who have historically been exploited and undermined by the majority population. How ironic, that a couple of centuries later the words they wrote are interpreted to further restrict native people.