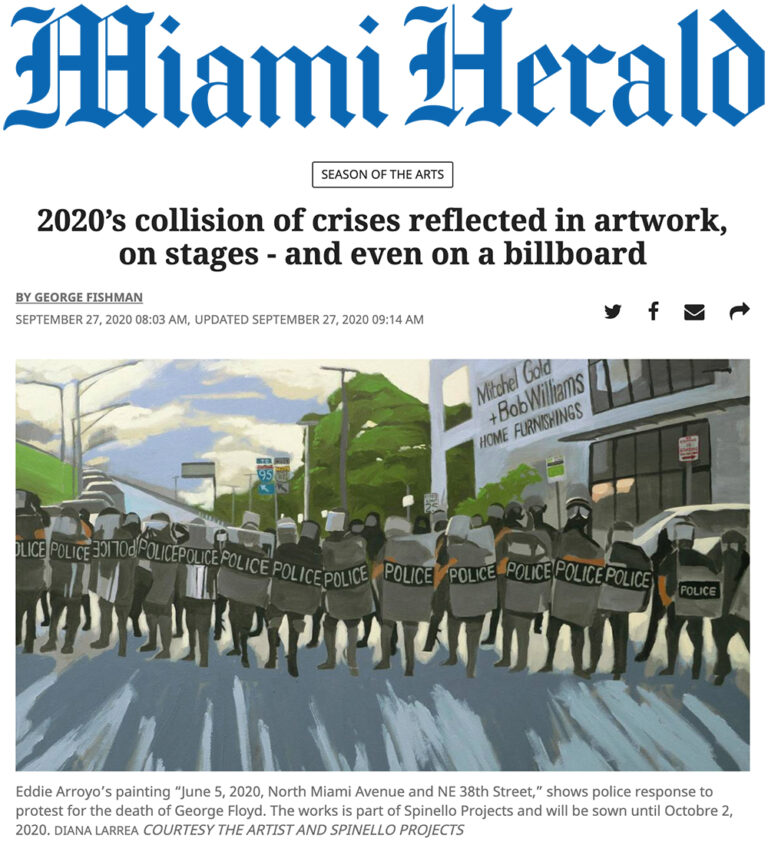 BY GEORGE FISHMAN (Sept. 27, 2020) – This misbegotten year, 2020, has emerged as a collision of crises. COVID-19, racial injustice, the economy and immigration dominate headlines, sometimes simply trading positions as the day’s the top story. But they are also interlocked, particularly in this election year.

For performance and visual artists shut out of shuttered cultural venues for the past six months, the ongoing traumas have become an unwelcome catalyst — but a catalyst nonetheless. Artists and institutions are responding both practically and provocatively as they seek to understand, interpret and survive this confounding year.

Artists have long played the role of commentators, reflecting on and voicing societal concerns. And perhaps this year, more than in a long time. “There’s so much going on today politically, socially, and health-wise during the pandemic that their sensibility is especially sharpened and charged,” said Yuni Villalonga, chief curator at the Coral Gables Museum.

For Oolite Arts CEO Dennis Scholl, “This moment remind me a lot of the 60s, where we are becoming more active as individuals on behalf of the causes we believe in. Artists are leading the way in standing up and being heard.”

The results — visible largely through virtual means — range from visceral to playful. Here is a sampling of fall offerings:

Naturally, the COVID crisis is a dominant theme for artists of all disciplines.

Dance NOW! Miami, dedicated to contemporary dance, has created a series of COVID(eos) at dancenowmiami.org/covideos. Works like “Contaminated,” and “Zoom Zoom Zoom: A Love Letter to Italy,” reflecting both the justifiably widespread fear of contagion and the longing and comic relief of Zoom sessions that may assemble a multitude of participants among little onscreen windows, yet manage to generate intimacy across thousands of miles.

Oolite Arts also turned to video. Early last summer, the organization formerly known as South Florida Art Center selected 12 Miami filmmakers and gave each $1,000 and two weeks to create short films reflecting the COVID experience. The result, “Close Quarters,” debuted July 15; several of the films are posted online at oolitearts.org/event/closequarters/. Symptomatic of the quarantine are such titles as “Mommy Will You Play With Me,“ Kairi During COVID” and “New Normal.” The microfilms deliver languid, tragic and quirky experiences – even a hilarious, cough-infected crime drama. The impending results of a PSA competition for wearing masks should be fun – and hopefully, effective.

On Sept. 28, Miami Light Project premieres “Zoo Motel,” an illusion-animated virtual play by director Thaddeus Phillips that was inspired by his literal quarantine outside Bogota. Limited to 21 audience participants nightly, it’s staged as a streamed broadcast from an imaginary hotel room in Iceland where the actor is quarantined. The unique production combines video and live theater with magic illusions and uses metaphorical stories to explore the disruptions that are paradoxically connecting us today. Through Oct. 25. Information: zoomotel.org/tickets.

Among the offerings in the Arsht Center’s Arsht@Home online productions is a series of short plays written by Miami authors and performed by Miami actors called Miami Monologues, (arshtcenter.org/ARSHT-AT-HOME/Miami-Monologues/). Several speak to the pandemic, including “Blackbird” by Symone and Quiana Major and “Quarantinis” from City Theater.

Look for more reflective performances when the Arsht Center unveils the results of its Heart of Art commissions representing “art in the time of coronavirus.” Already posted are five emotive works, including Maya Billing’s wistful “Postcard” dance performance and Joshua Hernandez’s quirky and oh-so-relatable “Waves of Isolation,” at arshtcenter.org/Education-Community-Engagement/Heart-of-Art/

Digital artists Sam Lavigne and Tega Brain have created “Get Well Soon,” combining the impersonal nature of a telephone directory with a poignant plea for rescue. It presents more than 200,000 messages of the “Feel better soon!” variety sourced from gofundme.com, where individuals post fundraising campaigns for such goals as cancer treatment. The artwork critiques the lack of universal healthcare in this country – and of a competent response to COVID. The work is presented by Dimensions Variable, an innovative artist-led studio and exhibition space newly settled in Miami’s burgeoning Northeast corridor; it can be seen at dimensionsvariable.net/get-well-soon.

Through its new Engage@GablesStage program, the venerated drama company commissioned nine theatrical video performances. While most address ongoing personal and societal issues, two speak directly to this moment. “Intimate/Internet“ by Brandon Urrutia and Michael Yawney follows a young man’s efforts to find connection while locked down in his parents’ home; the sci-fi “1/1000” by Joshua Jean-Baptiste explores a tech worker’s isolation amid pandemic and racial tensions. At gablestage.org/engagegablestage/.

As a photojournalist for the Miami Herald, Carl Juste, (also founder of Iris Photo Collective and curator of IPC ArtSpace) has been documenting the pandemic on a nearly daily basis. That work led him to create an interactive portal, “Exile at Home,” where he is encouraging locals to log stories and images of their own quarantine experience, at miamibookfair.com/exile-at-home-south-florida-portraits-of-isolation. It’s an archival project, but the purpose is deeper than that of a mere chronicle. The goal, says Juste, is to “strengthen our sense of community, as we together endure the effects of this global pandemic, and to chronicle this once-in-a-lifetime event collectively.” The project is supported by the Miami Book Fair.

After the pandemic erupted, Rina Carvajal, director of Miami Dade College’s Museum of Art + Design, in conjunction with the Miami Book Fair commissioned Spanish artist Dora Garcia to create “I remember Miami.” To produce it, Garcia recruited Miamians to record – through spoken word and photography – favorite spaces around the city. Sometimes wistful, sometimes comical, these impressions have created another quarantine time capsule. You can hear it at mdcmoad.org.

The succession of police killings of Black men and women have brought thousands of citizens to the streets in protest — and have moved artists to respond as well.

Painter Eddie Arroyo has shifted the focus of his critique from Little Haiti’s gentrification (which gained him participation in the Whitney Biennial) to decolonization of arts institutions to Miami’s Black Lives Matter marches through his depictions of animated crowd scenes and expressive portraits of rally leaders. “Safe Space,”

viewable in person at Spinello Projects in Allapattah through Oct. 2, features images of police barricades, burning cars and the facades of luxury-brand showrooms boarded up for safety. Information: spinelloprojects.com.

At the Bakehouse Art Complex, a cluster of art studios and exhibition spaces in Wynwood, activism is mainstream. On Sept. 29, director Cathy Leff will moderate a conversation on art and social justice featuring Nadege Green of the Community Justice Project, and art Chire Regans, whose mural “Say Their Names” memorializes victims of police assault, gun and domestic violence. bacfl.org

The Deering Estate follows suit on Oct. 17 with a panel moderated by dancer/choreographer Michelle Grant-Murray. deeringestate.org

Gun violence is the organizing theme of Jai-Alai Books’ planned publication, “The Miami Trilogy.” Nadege Green, as editor, is accepting submissions of narratives stories, poetry and artwork about how firearms have affected Miamians’ lives. jai-alaibooks.com/submit

Sometimes violence is only implied — but still packs a punch. Another Dimensions Variable project, “WHERE’S YOUR FAVORITE PLACE FOR POLITICAL ART AT HOME?,” invites “collectors” to borrow a framed photo by Francisco Masó for 15 days. Masó’s photos abstractly represent a political protester (himself), confronting police and are the latest of his often disguised explorations of government repression. dimensionsvariable.net

Miami artist Adler Guerrier’s dramatic double billboard mural “claimed for living, for love and trouble” was commissioned for the exterior of the Design District’s Moore Building, where it will remain for the next several months. The work combines poetic text with graphics and subtropical flora to explore the uncomfortable issues of race and class while evoking comfort and communion in the shelter of natural beauty. adlerguerrier.com.

The Art & Culture Center of Hollywood also has re-opened. Rosa Naday Garmendia’s “Not So Far Away” deals explicitly with Cuba-U.S. relationship and more broadly with the plight of immigrants and asylum-seekers. She has collaged vintage photos, visas and other ephemera and created a domino table assemblage, protest signage and a mural. Through Oct. 25. Information: artandculturecenter.org

Social-justice issues infuse two Frost Art Museum exhibitions. In “Otros Lados,” (through Dec. 6) three Mexican and Mexican-American artists explore intersections between the two countries and question what it means to be an “American” artist.

“House to House” (through Jan. 3), deals with women’s changing roles. Included in the show are works by Miami-based fiber artist Aurora Molina, whose “SO (Sew), America Cares” project benefiting Americans for Immigrant Justice invites volunteers to stitch imagery of children’s faces onto canvas discs that will be quilted – symbolically reuniting children separated from their parents at our southern border. The museum is open by reservation. Information: frost.fiu.edu

In a democracy, one vital form of protest is voting. Committed to fostering community-engaged performance, Live Arts Miami at Miami Dade College opens its season Oct. 8 with a nonpartisan “Make Your Mark” (get-out-the-vote campaign), animated by poets, musicians and comics in virtual performance. The effort, in partnership with the Institute for Civic Engagement and Democracy, VoteMiami.org, League of Women Voters, Engage Miami and Radical Partners aims to educate and inspire audiences about the power of their votes.

Particular celebration of women’s oft-endangered right to vote is central to “Forty Women Pulling at The Threads of Social Discourse,” a timely exhibition of provocative, hand-sewn artist flags at The CAMP gallery. Organized by Melanie Prapopoulos and members of the newly-formed Fiber Arts Miami Association, these pieces commemorate the centennial of women’s suffrage. Virtual reception on Oct. 1; open through Oct. 25 by appointment at 350 NE 75th St. #109, Miami. Information: thecampgallery.com.