But Is It Art?

Grace Blackshaw, in the first of this two-part series, explores the relationship between science and art and how the former inspires the latter. 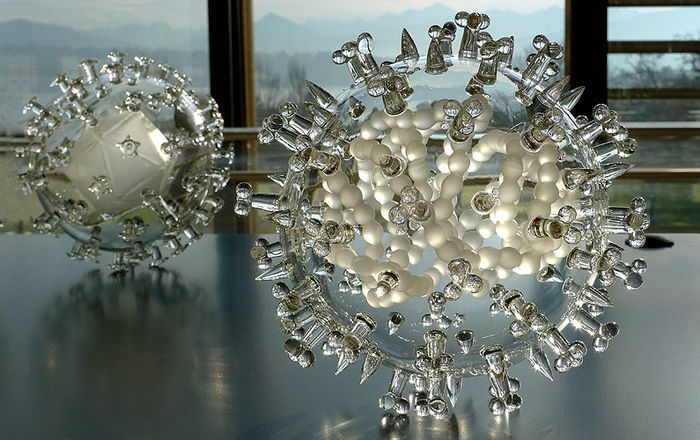 Art is often characterised as the antithesis of science. Stereotypes would have us believe artists are creative, chaotic, free spirits, working in messy studios. Scientists, by contrast, are logical, methodical and work in spotless laboratories, full of neatly labelled chemicals most of us have never heard of. The reality, of course, is far more complex.

The role of science as a muse is not a new phenomenon. Leonardo da Vinci’s obsession with understanding the natural world undoubtedly shaped his art, guiding his use of light, perspective and his depiction of the human body.

The Renaissance in general was a time of great progress in both art and science. Perhaps this isn’t surprising. After all, their purposes are not dissimilar: both seek to provide insight, a greater understanding of the world around us. It’s often said that art can provoke a more emotive response, but can’t great science do the same?

The truth is that I am neither an artist nor a scientist. For me, the impact of science on art is best understood, not through theory or generalisations, but through examples. Below are five of my favourite artists whose work is inspired by science. 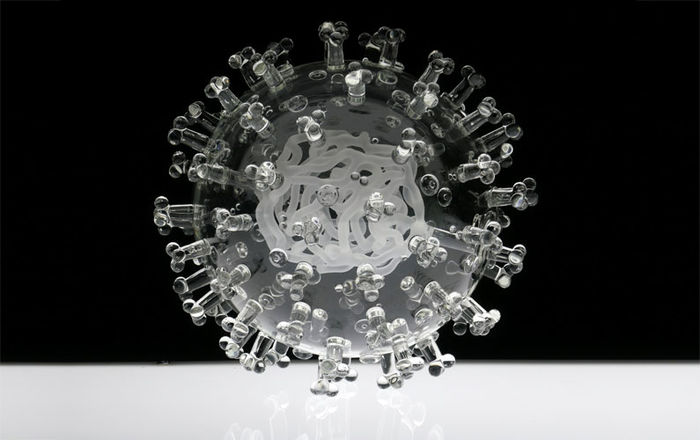 Coronavirus – part of Jerram’s Glass Microbiology series that have been exhibited all over the world.
LUKE JERRAM

Glass Microbiology is a series of glass sculptures of some of the world’s deadliest pathogens, including HIV, Ebola and recently Coronavirus.

We are used to seeing brightly coloured images of viruses, particularly in the media. In reality, viruses have no colour. They are smaller than the wavelength of light and their shapes can only be identified by electron microscopy – there is no light involved so colour has literally no meaning at this scale.

Jerram acknowledges that his work changes our perception of these viruses: “By making it in glass, you create something that’s incredibly beautiful – there’s a tension there, between the beauty of the object and what it represents.”

Each sculpture is carefully designed and constructed. Jerram begins by studying existing imagery of the virus. Detailed sketches are then run past a virologist, before the sculpture is constructed by professional glassblowers. Usually about 20 cm in diameter, these sculptures are approximately 2 million times bigger than their subjects.

In Search of Higgs Boson – produced in collaboration with physicist Pete Markowitz, celebrating the discovery of the Higgs boson particle.
XAVIER CORTADA

Xavier Cortada has long been interested in creating what he describes as ‘science art’, often also using his work to raise awareness of environmental concerns.

“The piece is an ode to both the science and the human effort required for an experiment on this scale.”

In 2007, Cortada visited Antarctica and ‘planted’ a replica of a mangrove seedling in the moving ice sheet, to spend the next 150,000 years moving with the ice sheet and symbolising the passage of time. He also created a series of Ice Paintings using ice and sediment samples.

In 2013, Cortada collaborated with physicist Pete Markowitz on an art installation to celebrate the discovery of the Higgs Boson. The five panels each represent one of the experiments used by scientists at CERN to confirm its existence.

The piece is an ode to both the science and the human effort required for an experiment on this scale. In the second panel, the Higgs Boson is shown decaying into two photons and in the third, into quarks. The background of the panels includes 383 pages from scientific publications and the names of the 4000 scientists, engineers and technicians who worked on the project. 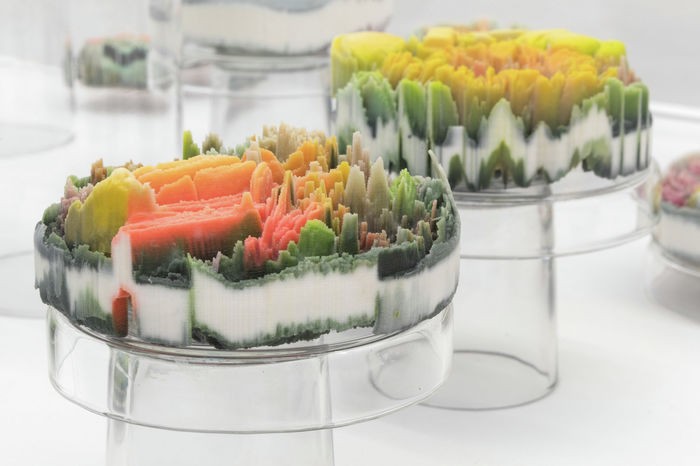 Remote Sensing – 3D printed models of locations inaccessible to humans that have been revealed in detail only by remote satellite observations.
SUZANNE ANKER

Working at the intersection of art and biology, Suzanne Anker is known for her varied use of mediums, including botanical specimens, medical instruments and geological samples.

Her 1993 sculptural installation, Zoosemiotics, includes metallic sculptural forms based on chromosomal pairs from fish, frogs, gazelles and gorillas. In the centre of the exhibition, a large glass vessel filled with water, distorts shapes and “conjures up the alchemist’s medieval laboratory and its mottled crystal ball”.

In Astroculture, biology is Anker’s medium as well as her inspiration. Seeds are planted in small peat pods, grown under bright purple artificial lights and without pesticides. The name is a nod to NASA’s term for plants grown in space.

Her sculptural series Remote Sensing is inspired by the new digital technologies used to map places too toxic or inaccessible for humans to visit. Each piece begins with a 2D digital photograph, which is converted into a 3D virtual model and then 3D printed using pigmented plaster and resin. 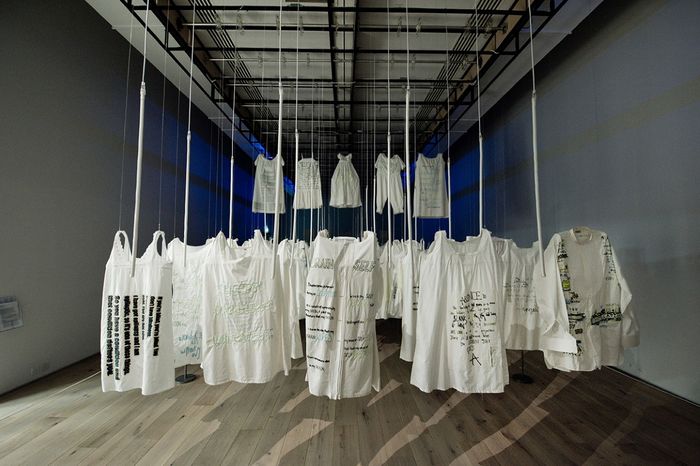 Out of the Blue – installation showing at Hatton Gallery, Newcastle, Susan Aldworth 2020. The work was made in response to ground breaking research at Newcastle University and Imperial College into a new treatment for epilepsy.
SUSAN ALDWORTH

Inspired by her own experience with a brain aneurysm, Susan Aldworth’s work focuses on the human mind, exploring concepts including sleep, consciousness and our sense of self.

The Portrait Atomised was a series of three multi-image portraits, displayed at the National Portrait Gallery. The portraits’ subjects, Elizabeth, Fiona and Max, all have epilepsy. Talking about the work, Aldworth describes being drawn to the transitory nature of the brain’s electrical signals.

Delving further into the fragility of the human brain, Transience is made up of a series of prints, etching directly from human brain tissue.

Her most recent work, Out of the Blue, also explores the experience of those living with epilepsy. Over 50 people contributed their testimonials, which were sown onto 100 items of Victorian underwear. The underwear was attached to a complex system of pulleys and motors and programmed to mimic brain activity during an epileptic seizure. 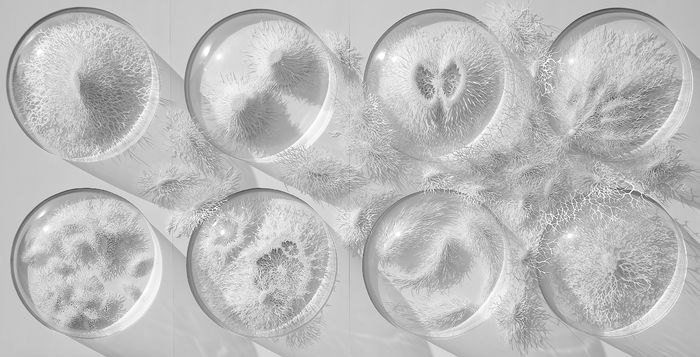 His artwork, Outbreak, is inspired by the Human Microbiome Project, a scientific study of the diverse colonies of bacteria that live in the human body. Each piece of paper is cut by hand using a scalpel and the sculpture then is built up in layers. This project took over 4 months to complete, but to Brown, this is part of the beauty of his method: “I work these sculptures in the same way as medieval monks worked to illustrate sacred manuscripts – slowly and painstakingly – the work itself being a hymn to the thing it is describing.”

Another of his series, Magical Circle Variations, plays on the surprising visual similarities between coral reefs and microorganisms found in the human body. Both contain fractals, patterns that repeat at increasingly levels of magnification. And in Brown’s own words, “both consist of biodiverse colonies of organisms that coexist more or less harmoniously.

Varsity is the independent newspaper for the University of Cambridge, established in its current form in 1947.