Many artists have traveled the world in pursuit of inspiration, but few have found it on the South Pole. Xavier Cortada did just that recently under the National Science Foundation’s Antarctic Artists and Writers Program.

Xavier’s Antarctic work is dynamic and multi-faceted,” said program director Kim Silverman. “[His] project represents a new and progressive dimension in artistic expression for the program, adding an element of conceptual interpretation to the growing body of Antarctic art and literary works.”

Cortada did not embark on his career to create art on the South Pole – in fact his original occupation was as a lawyer and advocate for troubled teens. But a trip to South Africa in the mid-1990s changed all that. 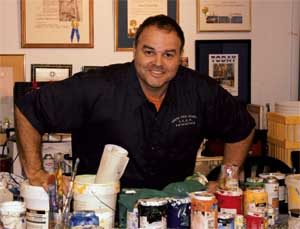 “It was the baboons!” exclaims the 42- year-old Cuban American, recalling the awe-inspiring wildlife and natural beauty that inspired him to change professions. A natural-born artist raised in an artistic family, Cortada felt his calling and acted on it.

His quaint and cozy art studio, just blocks from the Brickell financial district, is strewn with samples of his work and tools of the trade. One table is covered end-to-end with bottles of paint, creating their own mosaic of color and design.

Over the past decade, Cortada has produced murals, paintings, glass mosaics and exhibits around the world. Examples of his creativity are visible throughout Miami, from his “Miami Mangrove Forest” on I-95 to Miami City Hall, and the Miami-Dade Juvenile Courthouse to U.S. 1 in South Miami.

“His work is very much tied to his physical and cultural surroundings,” said René Morales, assistant curator with the Miami Art Museum. Morales commissioned Cortada’s “Absence of Place” for an exhibit on the Miami real estate boom. “The show dealt with an amazingly narrow topic, but his piece expressed the cultural and emotional effects associated with the physical. It was absolutely perfect for the show.”

That skill was expressed again early this year in the South Pole, where Cortada created various pieces for the Antarctic Artists and Writers Program. For a painting of Sir Ernest Shackleton (1874-1922), who made several expeditions to the icy frontier but never reached the South Pole, Cortada mixed melted ice with watercolors and soil samples from Antartica’s McMurdo Dry Valleys.
“I used pieces of Shackleton’s Antarctica to place him conceptually in the South Pole, the place that eluded him in life. The place he never went and always wanted to be,” the artist explained.

In another installation, Cortada used an element often represented in his work – a mangrove seedling. The artists “planted” an ice sculpture replica of a seedling in the ice sheet. In 150,000 years, the seedling will have moved with the ice sheet to reach the Weddell Sea, where it will symbolically “set roots.” Cortada says the journey symbolizes human evolution through time, and raises questions about what our world will be like 150,000 years from now.

For his “Endangered World,” installation, he combined art and science to plant 24 flags around the South Pole, each with the name of a threatened animal species. The flags were placed at the corresponding longitudinal degree where the species is facing extinction. A similar idea expressed in the “Longitudinal Installation” was accomplished with 12 black shoes placed in a circle, each corresponding to the longitudinal location where global changes have affected inhabitants’ way of life. That installation will be on display at the UN World Environment Day observations in Norway, on June 5.

Cortada’s “Markers” installation tied in to the 50th anniversary of the opening of the South Pole station on Jan. 4. It featured 50 variously colored flags placed along a 500-meter stretch of ice. Each flag was marked with a year and the coordinates of a place on Earth where something significant happened.

“For example, for 1973 I used the coordinates of Sydney, Australia, to represent the construction of the Sydney Opera House,” Cortada said. “I was making the point of how the world has dramatically changed over these 50 years.

“What I was trying to do in the South Pole was [illustrate] how we fit into this planet,” Cortada said. “How we may think that we are the ones who are in control and own this planet, but our role is custodial in nature and we need to try our best to leave it a little bit better than we found it.”
Selections from Cortada’s South Pole art are on display through May 5 at the Kunsthaus Miami Contemporary Art Space, 3312 N. Miami Ave. in the Wynwood Art District.