Miami, (Nov. 18, 2008) One of the first sights that will greet visitors to FIU’s new Frost Art Museum in its grand opening Nov. 29 is a stunning 40-foot tapestry created by celebrated Miami artist Xavier Cortada. The piece entitled “aer” or air, which hangs in the museum’s soaring atrium, is the first of four commissioned works that the artist describes as “digital tapestries”. The works are inspired by the four elements of water, air, fire and earth, and will be rotated throughout the year. Cortada’s work was chosen from among 80 artists who submitted proposals to the Frost for an installation as part of Art in State Buildings. “The piece is breath-taking,” said Carol Damian, director and chief curator of the Frost. “Along with our beautiful building, this work makes quite a first impression.”The work was designed to complement the 46,000-square-foot building which is itself a work of art designed by Yann Weymouth , design director of Hellmuth, Obata Kassabaum (hok). The new Frost Art Museum cost $16 million to build and includes nine galleries and 10,000 square feet of breath-taking gallery spaces. Design began in 2001, and two years later, Skanska USA, the construction firm, broke ground as the museum was officially renamed The Patricia Phillip Frost Art Museum. Construction began in 2004. The building was completed in 2007. Some 6,580 pieces of stone and 42,390 square feet of granite from China were used to construct the building. Its design features make the Frost a unique venue for experiencing the visual arts in Florida. No art museums in the state have attempted to exhibit paintings in natural light, although many works were created in and meant to be seen in daylight. The new Frost replaces the less than 3,000 square-foot space in the Primera Casa building that was home to the museum since 1977.The new museum building opens to the public Nov. 29 with six new exhibitions including Modern Masters from the Smithsonian American Art Museu. The opening also kicks off more than a week of events celebrating the debut of Miami’s first new art museum in a decade and the only major Miami museum that charges no admission. Opening events will culminate with the Frost’s Art Basel sponsored event, the sixth annual Breakfast in the Park, featuring sculptor Joel Shapiro. Cortada says that the tapestries composed in striking colors that relate to each element suggest “that if we look more closely at our surroundings, there are new worlds to discover. Indeed, inside the museum, there are works by artists who strive to push boundaries to further human understanding.” Recently, Cortada took his own words to heart when he participated in an artist-in-residence program in Antarctica. Sponsored by the National Science Foundation’s Antarctic Artists and Writers Program, the artist was moved by the latest scientific information gathered on climate change. He asked the researchers to provide him with ice core samples from their investigations that he then used in an innovative way to create works of art. He used the samples as brushes, dipping them into acrylic paints before applying them to paper, often allowing them to melt and pool, while the ancient sediment contained within adhered to the surface.This series of 9 x 12 abstract works convey a sense of Antarctica’s flowing ice streams and vast ice sheets as if captured from above by a satellite lens.This residency, completed in January 2007, also inspired his use of the elements in the commissioned works for the Frost Art Museum, Cortada says. Awareness of the interconnectedness of all things in our universe is what he hopes to convey to the viewer. In the university setting, Cortada hopes that his tapestries “will invite students and faculty from all fields to experience culture and explore beyond what they are taught to learn in their respective disciplines.”The Frost Art Museum is an AAM accredited museum and Smithsonian affiliate. The museum is located at 10975 SW 17th St. across from the Blue garage and adjacent to the Wertheim Performing Arts Center on the University Park campus. From Nov. 29 through Sunday, Dec. 7, the museum will be open every day from 10 a.m.to 5 p.m. to celebrate the opening. Normal hours of operation are Tuesday through Saturday 10- 5.and Sunday noon-5. The Frost is closed on all legal holidays. For more information, please visit www.frostartmuseum.org or call 305-348-2890. 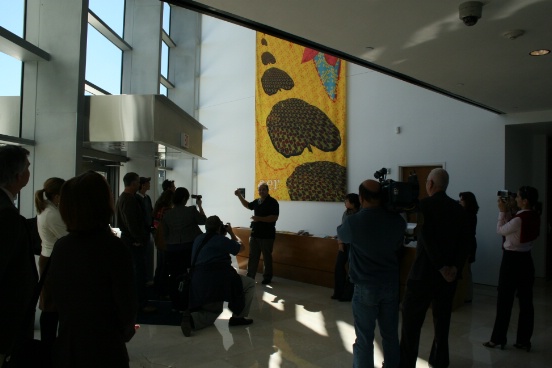