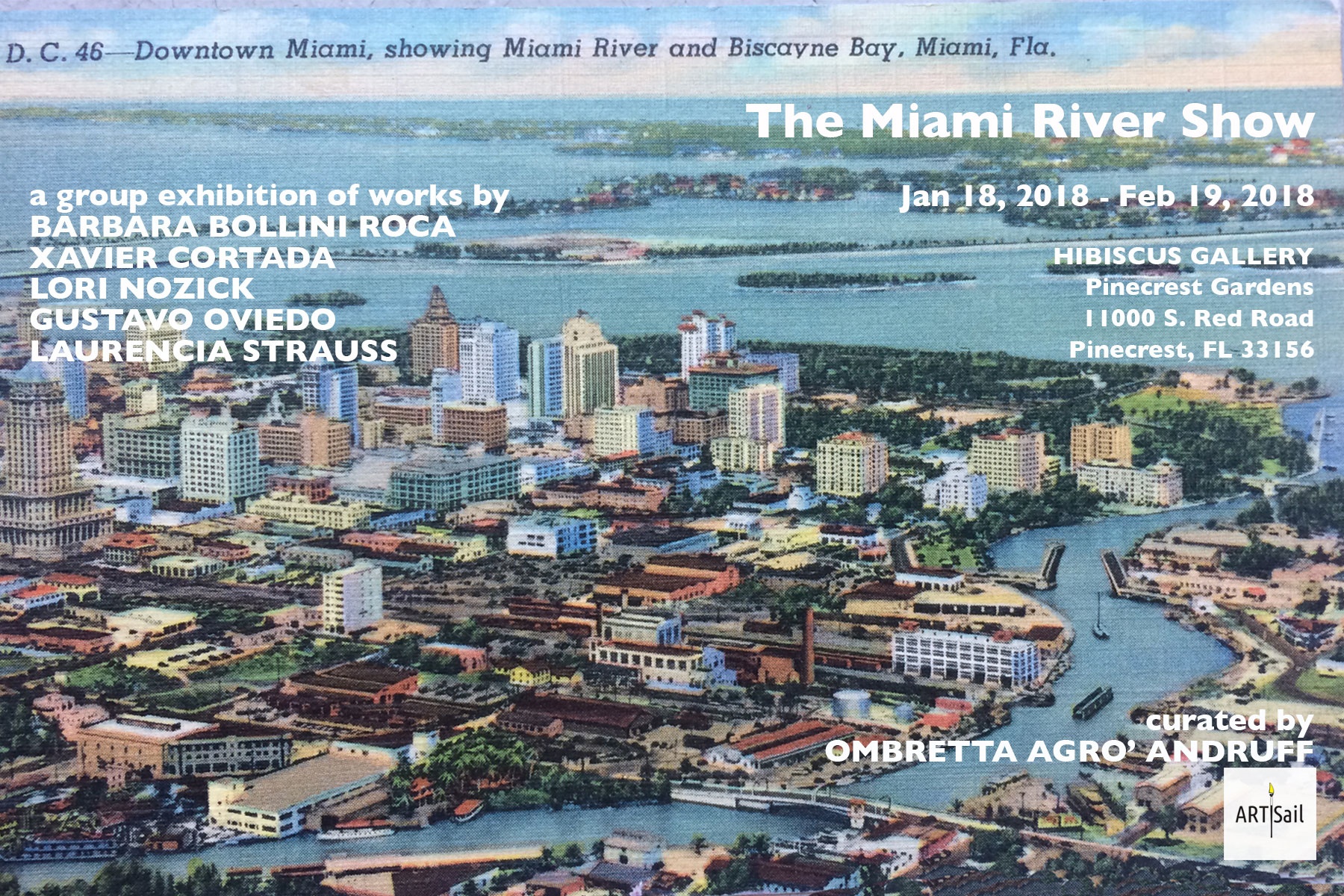 Through video animations, photographs, digital prints, old postcards and nautical charts, the artists in this exhibition explore the river’s history, the condition of its waters, and its current hyper-gentrified condition, in which old fisheries, boatyards and “mom-and-pop” eateries cohabit the river’s banks with trendy restaurants, sleek yacht clubs, and multimillion-dollar luxury condos.

Laurencia Strauss and Gustavo Oviedo are both investigating the history of the river, using a combination of found postcards, photographs and videos;

Lori Nozick presents collages executed on found maps; while Barbara Bollini pays homage to the river and its inhabitants with a video and short animation.

Lastly, in collaboration with researchers from the FIU School of Environment, Arts and Society, Xavier Cortada continues his investigation of diatoms (single-celled micro-lgae organisms encased in a silica shell) which are often used by scientists to monitor environmental and water quality conditions, both past and present.

Special thanks to image (above) graphic design: ABC Silk.

Xavier Cortada, Just Below the Surface: 1566 (Pedro Menendez de Aviles lands on the north bank of the Miami River.), 2018.

The exhibition takes its starting point from The Miami River Project, a multi-year, multi-disciplinary project conceived in 2008 by Xavier Cortada, never fully implemented, and the curator’s interest in the river and the city’s relationship to it; and was developed over 6 months of exchanges and conversations between the two.

Through video animations, photographs, digital prints, old postcards and nautical charts, the artists in the show explore the river’s history, its current hyper-gentrified condition, in which old fisheries, boat-yards and “mom and pop’s” eateries cohabit along the river’s banks with trendy restaurants, sleek yacht clubs and multi-million luxury condos, as well as the condition of its waters.

Laurencia Strauss and Gustavo Oviedo are both investigating the history of the river, using a combination of found postcards, photographs and videos, from the Tequesta archeological sites that have been discovered on its banks, to the water falls that used to dot its course before it was channelized, causing irreparable damages to the quality of its running waters.

Lori Nozick presents drawings and collages executed on found maps; while Barbara Bollini pays homage to the river and its inhabitants with “In Reverse”, a short animation that starts with a speculative future of the state of Florida in 2050 and moves backwards portraying how the natural water flows of the Miami River and the Everglades have been affected since the 1900’s. Lastly Xavier Cortada continues his investigations of diatoms (single-celled micro-algae organisms encased in a silica shell) often used by scientists to monitor environmental conditions, past and present, and water quality. Working with Evelyn Gaiser, Matt Smith and other researchers at FIU School of Environment, Arts and Society, Cortada is presenting digital prints created from images he took of present-day diatoms and those that lived in the river during two historical events which took place at the mouth of the river: the first dating back to 1566 which memorialize the encounter between Pedro Menendez de Aviles and a young member of the Tequesta; the other from 1896 commemorating the city founders Julia Tuttle and Henry Flagler and the vote that took place in 1896 to approve the creation of the City of Miami.

This exhibition is presented by ARTSail, a nomadic residency and research program that seeks to provide artists and cultural producers with the opportunity to research and explore the extensive coastlines and waterways that surround Miami.  ARTSail was launched in 2016 in partnership with the ArtCenter / South Florida and the Patricia and Phillip Frost Museum of Science, under the direction of independent curator Ombretta Agró Andruff, thanks to the award of a Knight Arts Challenge Grant in 2015. For more information: www.artsail.info

Barbara Bollini started studying art at Parsons School in Paris over 20 years ago. Later she relocated back to Santa Cruz Bolivia, her hometown, to start a prolific production of paintings for seven years while exhibiting around the country and studying printmaking at NUR University.

She assisted at the Ruth and Marvin Sackner Archive of Concrete and Visual Poetry from 2012 to 2016. In September 2015 she opened ABC Silkscreen shop, where she helps creatives make their printed related projects come alive. From 2015 to 2016 she interned at the FIU-Wolfsonian Museum, assisting Frank Luca in curating the show: Boxeo y Béisbol: The Cuba-U.S. Sports Exchange.

Xavier Cortada’s engaged science-art practice is based at FIU School of Environment, Arts and Society and the College of Communication, Architecture + The Arts.

Cortada often engages scientists in his art-making: At CERN, Cortada and a particle physicist created a permanent digital-art piece to celebrate the Higgs boson discovery. Cortada has worked with scientists at Hubbard Brook LTER on a water cycle visualization project driven by real-time data collected at a watershed in New Hampshire’s White Mountains.

He has collaborated with a population geneticist to explore our ancestral journeys out of Africa 60,000-years ago, with a molecular biologist to synthesize a DNA strand from a sequence 400 museum visitors randomly generated, and with botanists to develop multi-year participatory eco-art eff orts to reforest mangroves, native trees and wildflowers across Florida.

Lori Nozick was born in the northeast US, and lived in New York for 25 years. She currently lives in Miami and has a studio in the Fountainhead Program in Miami, FL. Ms. Nozick holds a BFA from Philadelphia College of Art, and an MFA from Pratt Institute. The artist has exhibited her work in galleries and museums, done site-specific installations, been awarded public art commissions, and has received international, national, state, and foundation grants and fellowships for her work.

Ms. Nozick presented her work as temporary installations at the Bass Museum Temporary Contemporary Art In Unexpected Places Series in 2015, the Deering Estate in Cutler Bay, FL in 2013; and SCOPE Art Fair Miami 2012; she artist completed a permanent art commission for the UWF College of Business, Pensacola FL, sponsored by the FL Art in State Buildings Program. She had solo exhibitions at the Arts and Culture Center of Hollywood, FL (2012); at berlin art scouts Gallery in Berlin, Germany (2010), amongst others.

Ms. Nozick has taught and lectured at Pratt Institute, Brooklyn, NY, American University in Corciano, Italy, William Patterson University, NJ and is currently an adjunct professor at Miami Dade College in Miami, FL. The artist also worked as a Museum Artisan and Preparator for the Wolfsonian Museum/FIU Miami Beach, FL and as a sculpture conservator for Silverlake Conservation, City of Palm Beach Gardens, FL.

She is currently developing a Miami Arts Resource Guide working with the Miami-Dade Department of Cultural Affairs and several arts and residency organizations.

French diver, researcher, and multidisciplinary artist, Gustavo Oviedo has worked in Miami for the past 20 years. Oviedo was born in Paris, France and raised between Colombia, Venezuela, Mexico and finally Miami. He has a Master’s Degree in Visual Effects and Animation. He works in various mediums including video, photography, collage, sculpture and mural. Oviedo’s work has been exhibited at the Bridge Red Studios, North Miami, FL; The ArtCenter / South Florida; The Young at Art Museum, Davie, FL; Art and Culture center of Hollywood, FL; Boca Museum of Art, Boca Raton, FL; among others. He also collaborates with ARTSail as nautical history consultant.

Laurencia Strauss is a visual artist/landscape architect investigating vulnerabilities and ingenuities of people and the places they inhabit. Through socially engaged actions, installations and projects in public spaces, she gives agency to local knowledge and explores relational dynamics of sites and situations. Her practice ranges across projects that generate healthy living systems and projects that creatively disrupt to invite rethinking and restructuring. Working across art and design, she creates experiences with photographs, video, books and mixed-media sculpture that heighten our sense of interdependence.

A mixture of Argentinean and southern US cultures, Laurencia is based again in her home city of Miami responding to sea level rise issues at a critical moment of consciousness for South Florida. She sees Miami as a vibrant city actively developing its identity while simultaneously grappling with a serious health condition. Influenced by experiences with her sibling who lived with chronic and terminal illness for many years, Laurencia came to understand that a difficult diagnosis – for a person or a city – does not necessarily mean imminent death but may bring vibrant phases of life as innovative strategies of maintenance, growth, hope, and adaptation emerge.

Ombretta Agró Andruff, born in Italy in 1971, is a Miami-based freelance curator, art consultant and writer. Moving to New York City in 1998, she curated solo and group shows along with special projects in Europe, the United States and India in collaboration with museums, art festivals, commercial galleries and art fairs such as Artists Space; The Queens Museum of Art; Lower Manhattan Cultural Council; The Armory Show; The Art Basel Miami Fair; The Downtown Arts Festival; The d.u.m.b.o. art under the Bridge Festival; Dorsky Gallery Curatorial Programs; the 2006 Turin Winter Olympic Games; the Religare Arts Initiative; and the Art Center South Florida. Agró’s 360-degree understanding of the intricacies of the art world comes from her work within both the non-profit and for-profit worlds. Through participation at art fairs via her company Agró/Glickman STEP (1) (2005-2011), as an independent art consultant and curatorial advisor, a contributor to art publications, books and catalogues. She has consulted for the Italian Cultural Institute of New York, the advisory firm Art Assets, the biennial event Asian Contemporary Art Week, and served as the International Art Advisor for the New Delhi-based Religare Art. From 2014 to 2016 she was the curatorial advisor for Miami-based Diana Lowenstein Gallery and is currently spearheading ARTSail, a research and residency program focused on exploring Miami’s relationship to water and the environmental challenges faced by South Florida, in collaboration with the Art Center / South Florida and the Frost Musem of Science. She is part of the Art in Public Places Committee for the City of South Beach and joined the board of IKT, the International Association of Contemporary Art Curators in April 2014.

Respected for her uncanny ability to identify the “valued” artists of tomorrow—today—Ombretta began lecturing in 2001 when she was invited by the Whitney Museum of American Art in New York to speak on her personal curatorial experience. She has since lectured in New York City at Engine 27; the School of Visual Arts; Pratt Institute; New York University; the United Nations; Cooper Union; as well as Kingston University (London), the Fondazione Bevilacqua LaMasa (Venice); Technarte (Bilbao); the inauguration of the Religare Arts Initiative (New Delhi); and the JJ School of Art in Mumbai, India.

More than two decades of international contemporary art experience provide Ombretta Agrò Andruff with a unique perspective, in an increasingly diverse art world, enabling her to build cultural bridges that facilitate broader public awareness of emerging and mid-career artists – virtually the world over.