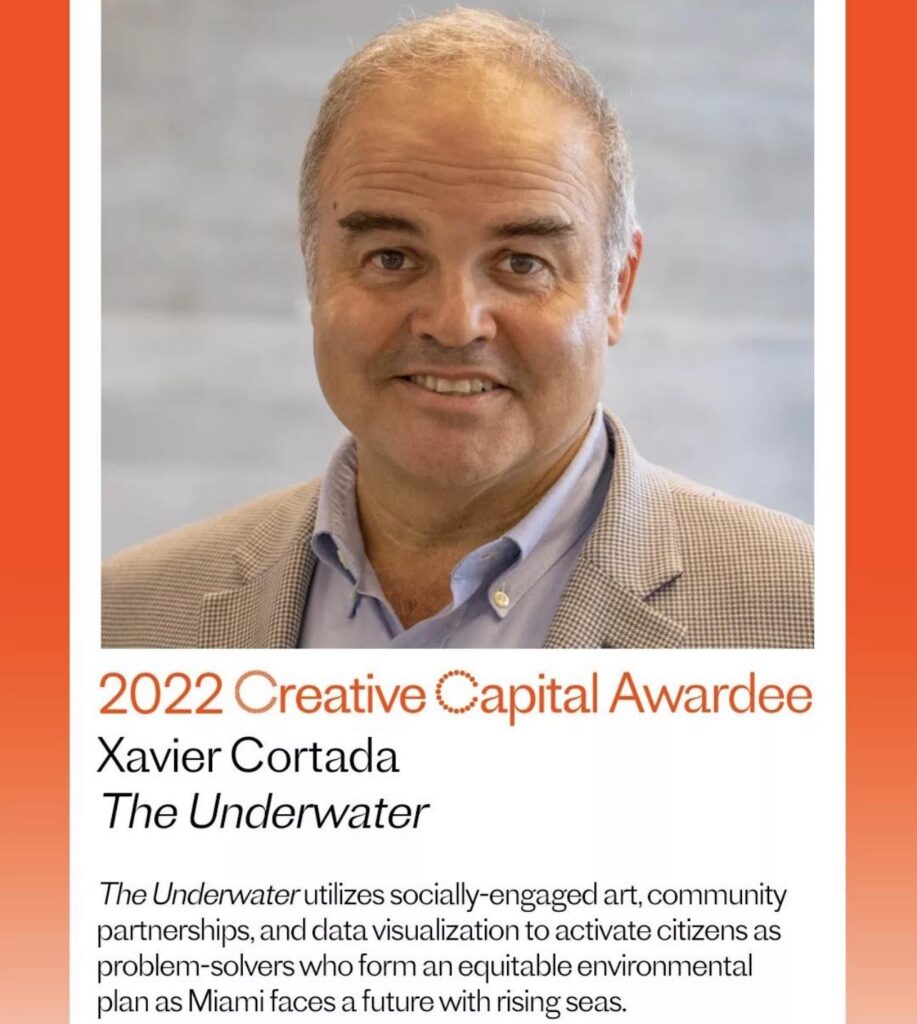 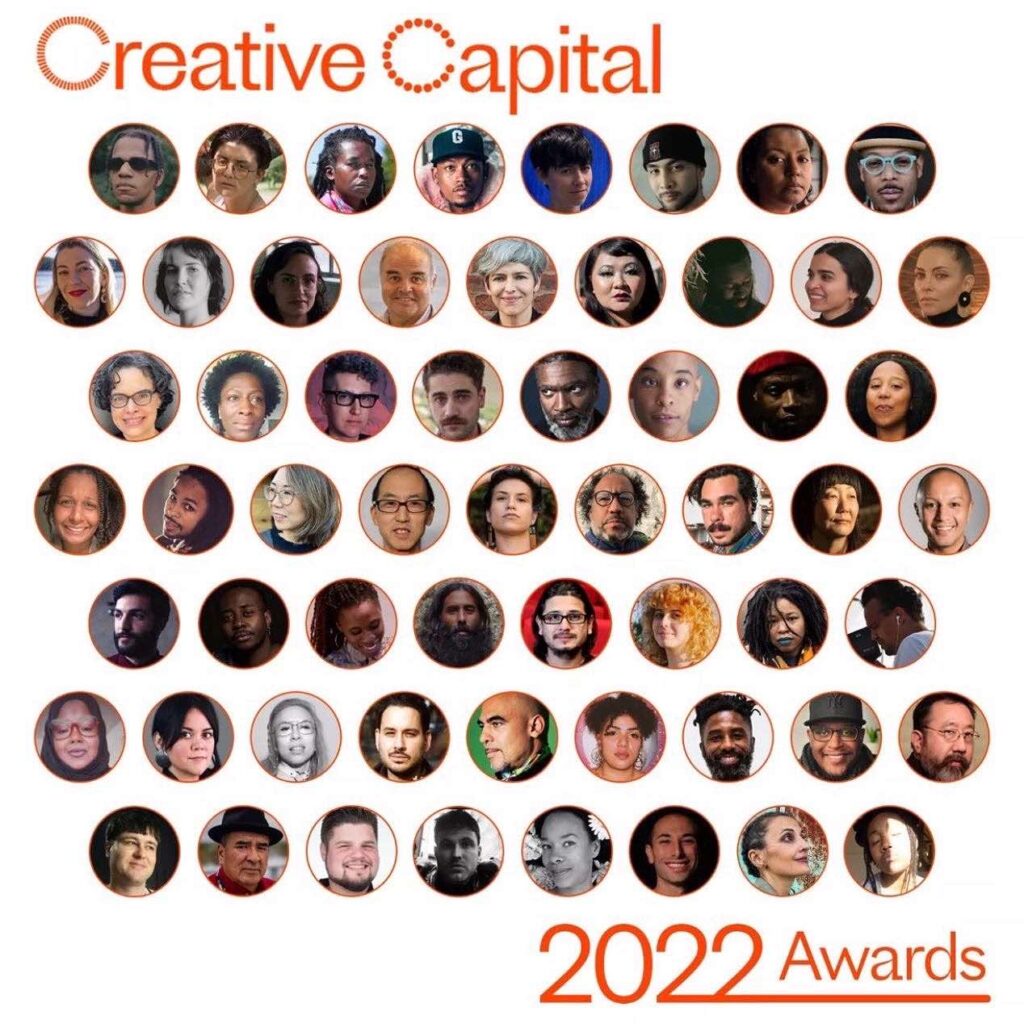 “Creative Capital believes that funding the creation of new work by groundbreaking artists is vital to the vibrancy of our culture, society, and our democracy. We are dedicated to supporting artists who are pushing boundaries and asking challenging questions—especially now when new ideas are critical to imagining our future,” said Christine Kuan, Creative Capital President and Executive Director.

“The selected projects critically and creatively address some of the most pressing issues of our moment, as well as painful historical legacies that continue to shape our present— from abortion, to money laundering in the art world, to the mass graves from the convict leasing program, to the lasting imprint colonization has left on the construct of time zones,” said Aliza Shvarts, Creative Capital Director of Artist Initiatives. “These artists demonstrate, with urgency and power, the many ways creative practice not only engages the world, but endeavors to shape it.”

Since its founding in 1999, Creative Capital has been deeply committed to diversity in all its forms— artistic disciplines, geographic regions, and artist identities. The 2022 awardee cohort comprises more than 90 percent Asian, Black, Indigenous, and Latinx artists of all abilities and genders from their 20s to their 60s. The 50 projects in the visual arts, performing arts, film, literature, socially engaged and multidisciplinary practices were selected from more than 4,000 applications via Creative Capital’s open call, national application process and through multiple rounds of external review culminating discipline-specific panels composed of experts, curators, arts professionals, and past awardees. The artists are affiliated with all regions of the United States and its territories, including Big Sky Country, the Midwest, New York City, NorCal and the Pacific Northwest, North- East, SoCal and Hawaii, South-East, South West, Texarkana, and Puerto Rico.

See the details of the 2022 Creative Capital Awards below.

Creative Capital is a nonprofit organization whose mission is to fund artists in the creation of groundbreaking new work, to amplify the impact of their work, and to foster sustainable artistic careers. Founded in 1999, Creative Capital pioneered a transformative grantmaking model that marries direct funding to individual artists with infrastructure and scaffolding support. Our pioneering efforts have impacted not just artists, but the arts ecosystem as a whole. The Creative Capital model of philanthropy has inspired countless other nonprofits investing in the long-term, sustainable careers of artists. More than 75 percent of recent awardees are Black, Indigenous, Latinx, Asian, or artists of color representing a wide range of age groups, artistic disciplines, and regions. Our awardees have received prestigious honors and other accolades, including: 127 Guggenheim Fellowships, 19 MacArthur “Genius” Fellowships, 3 Academy Awards and 13 nominations, and 1 Booker Prize. Creative Capital’s programs are made possible by generous donations from our Board of Directors, National Advisory Council, and other individuals, and with major support from founding donor, The Andy Warhol Foundation for the Visual Arts, in addition to Bloomberg Philanthropies, Doris Duke Charitable Foundation, William and Flora Hewlett Foundation, Lambent Foundation, The Scherman Foundation, Skoll Foundation and Surdna Foundation. Creative Capital’s programs are also supported by the National Endowment for the arts and the New York City Department of Cultural Affairs, in partnership with the City Council.

E. Butler to the migration of Black Americans to California, the epicenter of the science fiction

movement, and the rocket science industry.

contributions and legacies to architecture, creating a new column order that reimages American

monuments to allow for alternative histories of site, space, and identity.

TÁTAOTAO is a ritual performance that activates the transformative potential of Indigenous worlds.

feature peoples and regions that are, and will be severely affected by climate change.

Sweetmeats or, Who Killed Issam Sukkar?

Sweetmeats or, Who Killed Issam Sukkar? is a novel written in Arabic, set in a border town between

Lebanon and Syria that explores relationships between gender and labor, global migration and

searching for a dictionary’s missing word. At the heart of the film is the questioning of the word

disappearance, and language as a whole, in the construction of our realities.

For Ever More—FutureTradition: An XR Opera Garden

In For Ever More—FutureTradition: An XR Opera Garden, Du Yun experiments for the first time with

ANTIPHONARY is an open-ended, ongoing song engaging the forms of book, album, and live

traces the history of Arab, South Asian, and African migration to Latin America and the Caribbean. At

the center of this wide-ranging work is Puerto Rican-Palestinian solidarity movement.

This opera brings to life the fascinating story of Aponte, a free Black carpenter in nineteenth-century

slavery in Cuba, then one of the richest, most powerful, and violent slave societies in the world.

liturgy, and asks: What might it mean to engage dance practice as faith practice, performance as

communal ceremony, performance space as consecrated site, and audience as a fellowship of

Let Me Let You Go

and trans that are inoculated with a serum created by a biotech billionaire, turning them both into a

fungal cross-species as the earth collapses.

Requiem for Young Black Men Assassinated by Police in America

Memory Fleet: A Return to Matr

Memory Fleet: The Return to Matr is a migrating performance and archive celebrating the living

and men to reclaim their humanity through the creative process.

The Ballad of Suzanne Césaire

The Ballad of Suzanne Césaire tells the story of the Caribbean writer, activist, and surrealist.

deaf and signing dancers embark on a musical, textural, and gestural journey through

the seedy underbelly of the deaf community during the Prohibition era of the “Roaring ‘20s.”

modified E. coli, Lucy Kim explores human pigmentation and the disingenuous use of vision to justify

Our Feelings Were Made By Hand

Body as a Crossroads

(re)membering practices of body and land to mobilize the possibilities of dance-making as changemaking.

environment of Puerto Rico and Mexico and reappropriate colonial narratives.

N(8)tive Enough is a dance-theatre piece built from the personal stories of a Hapa-Hawaiian, hula,

modern dance, kitschy pop culture images, and humor, asking audiences to reflect on what it means

to be Native while highlighting the expectations, misperceptions, and misinterpretations of Native

through a remarkable archive of footage collected by his son, Hubert.

Zambia: Tomorrow the Moon! is a meta-documentary hybrid poetry/prose project that imagines and

re-imagines a cavalcade of fictional Zambian writers, political and historical figures from the 17th to

In Ground Truth, Mimi Onuoha will build a machine-learning model that finds counties in the US that

Lucid Decapitation is a feature film that conducts the energy of loving destruction into mythic form,

monument’s claim on space and time.

and expertise of the underrecognized migrant workers behind the Kentucky Derby, the most famous

horse race in the world. Following a racing season from beginning to end, this observational film

reveals the web of class, labor, and wealth in the American South.

controversies over the ownership of Black vernacular photographs.

My Little BEI 🤖🐱 : Robot Animal Familiars are AI in the form of an app or robot animal companions.

Thank God for Abortion Telenovela Pilot is a scripted narrative, utilizing the hallmark drama of the

form to disseminate the message that abortion is healthcare.

Two Refusals is a feature-length experimental essay film that looks to sites of refusal, rejection, and

revolt across India and Africa, and the bonds of solidarity that developed across the two continents

against the Portuguese Empire.

Mosaic (music from the African Diaspora)

musicians from the Caribbean, North Africa, and South America to create jazz arrangements from

Bal Trips is a fictional travel agency, website, and installation that help tourists travel to “developing”

nations without fear of spreading colonization, eurocentrism, and exploiting their privilege.

See Me See We

represented through brass busts in the artist’s image and likeness, informed by research on facial

scarification, hairstyles, and body adornment traced back to their ethnic groups of origin dating back

Project Black Plague is a sound performance experienced through headphones, revealing a

R.S. in Cody: Heart Mountain is an evening-long work for music theater whose subject involves the

experimental opera, and bona fide proposal to the United Nations to relocate the international Prime

Meridian from Greenwich, England to its antipodean coordinates, the open waters of Te Moananui-ā-

For 4 Years, Steven Tamayo and the Mní Wičhóni Nakíčižiŋ Wóuŋspe (Defenders of the Water

performance that engages the labor of legacy maintenance.

Through an album and multimedia site-specific performances, Marcos Varela will explore the events

of 2020 and 2021—including the pandemic, reckoning on racism, 2020 election, and ongoing sociopolitical

3 RITES: Life, Liberty, Happiness is a three-part performance that interrogates why life, liberty, and

happiness were included in the U.S. Declaration of Independence as inalienable rights.

technophilia through the lens of a plant world altered to facilitate faster carbon capture.

As Good As Mine

time. Based on the real-life events of Zhalarina’s family, this production investigates what truly makes

a hero and how far a father might go to save his child.