May It Please the Court 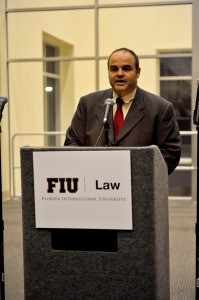 In preparing “May It Please the Court,” a 2004 solo exhibit in the rotunda of the Supreme Court of Florida, Xavier Cortada painted seven paintings portraying landmark US Supreme Court cases originating Florida, the artist’s home state. The paintings, which remained at the Supreme Court through 2009, are now on long term loan to Florida International University College of Law.

On January 16th, 2010, Xavier Cortada joined Dean Acosta and President Rosenberg in presenting his May it Please the Court exhibit at FIU. 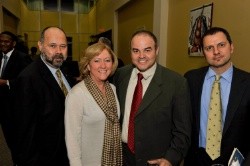 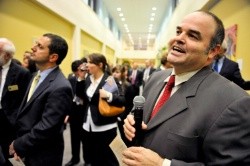 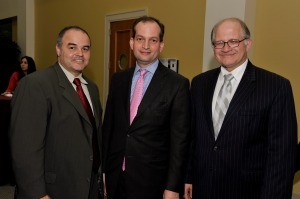 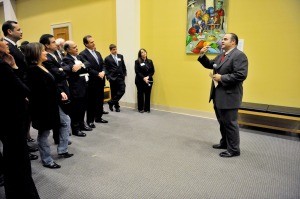 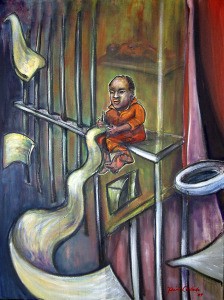 GIDEON V. WAINWRIGHT
372 U.S. 335 (1963)
If an obscure Florida convict named Clarence
Earl Gideon had not sat down in prison with a
pencil and paper to write a letter to the Supreme
Court; if the Supreme Court had not taken the
trouble to look at the merits in that one crude
petition among all the bundles of mail it must
receive everyday, the vast machinery of
American law would have gone on functioning
undisturbed. But Gideon did write that letter;
the court did look into his case; and he was re-
tried with the help of competent defense
counsel; found not guilty and released from
prison after two years of punishment for a crime
he did not commit. And the whole course of
legal history has been changed.
(Kennedy, 1963)
In researching Gideon v. Wainwright, 372 U.S. 335 (1963), I found that Bobby Kennedy quote and instantly came up with my composition about the landmark case on "the right to an attorney.”  Instead of focusing on what Gideon was unable to do in the courtroom without an attorney ("lawyers in criminal courts are necessities, not luxuries"), I focused on what he did accomplish after he was sentenced.
Gideon could have literally done what his cell mate is doing in my painting, just sitting back and rotting away in jail. He could have used that paper as toilet paper. Instead, what Gideon decided to do is act. Because Gideon decided to write from his cell, others were guaranteed a right to counsel before being sent to theirs.
Even in the most isolated, remote place, he said, ‘I am going to challenge.’ For someone who is marginalized to that level: no money, no nothing, no power;  a  roamer, a drifter now sitting in jail. And you can single-handedly change the course of history.
I think it speaks volumes for what we as individuals in a society can do.
Xavier Cortada