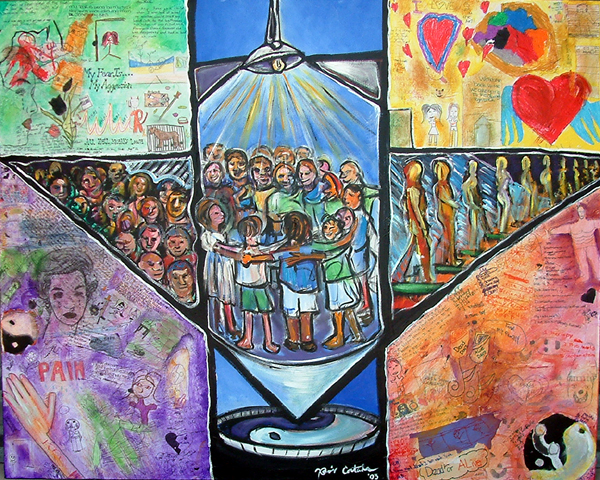 During Spring 2002, Xavier Cortada worked with adolescents in a South Florida residential psychiatric treatment facility to create “Trapped” (60″ x 48″, mixed media on canvas, 2002), a collaborative mural  that captured their voices and concerns.

The “Trapped” mural was presented on June 21, 2002 at the Florida Bar Public Interest Law Section Luncheon during the Florida Bar Annual Meeting in the Boca Raton Resort and Club.

The Voice Project commissioned Cortada to create a second mural in 2003.  This time with youth in the Jackson Memorial Hospital SIPP program.  This mural is to be presented (along with the 2002 Trapped mural) during March 1 – July 15, 2004 in “May It Please the Court,” a solo exhibit of artist Xavier Cortada in the Supreme Court of Florida.

This mural project was commissioned by the University of Miami School of Law Children and Youth Law Clinic and funded through a community grant from the Miami-Dade Department of Cultural Affairs.