What does it take to win a Silver Knight? These top students have the answer, and the statue

What does it take to win a Silver Knight? These top students have the answer, and the statueXavier CortadaJune 26, 2020June 29, 2020 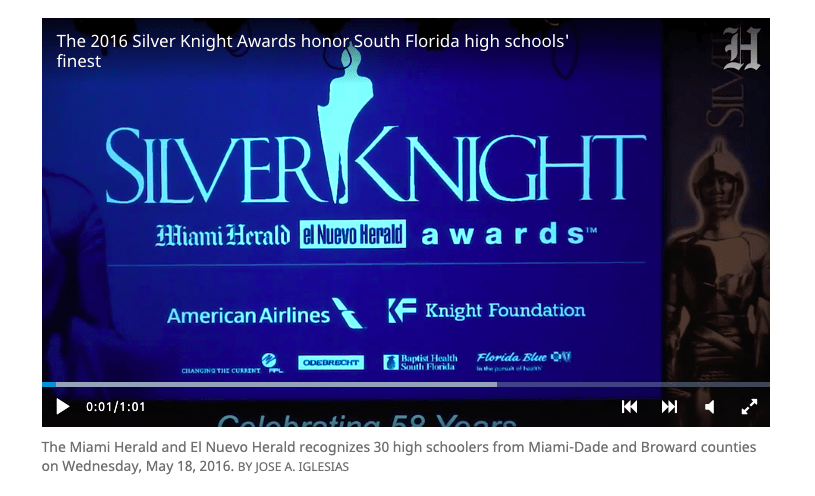 What does it take to earn a Silver Knight award?

It takes the courage to tackle Islamophobia, the stamina to run a triathlon and the kind of academic dedication that gets you accepted to Harvard. It takes a heart big enough to serve foster kids, artistic talent that breaks barriers and the will to learn more than a dozen languages.

In other words, it takes a rare blend of stellar grades, selfless service and superior talent to win a Silver Knight — the prestigious, 58-year-old prize awarded annually by the Miami Herald and El Nuevo Herald to outstanding high school seniors.

On Wednesday, 30 students from Miami-Dade and Broward counties proved they have what it takes. They were named 2016 Silver Knight winners in a glitzy ceremony at the James L. Knight Center in downtown Miami.

“We’re here to honor you, the high school seniors who go above and beyond making a tremendous impact on our community,” said Miami Herald President and Publisher Alexandra Villoch. “You have brought us together through your academic achievements, as well as your commitment to service.”

Hundreds of students were nominated by their schools in more than a dozen categories, and selected by a panel of judges who also picked three honorable mentions. The winners join a cast of Silver Knight alumni that includes Amazon founder Jeff Bezos, local artist Xavier Cortada and retired U.S. Ambassador Frances Cook.

Winners take home $2,000, a medallion and a Silver Knight statue. Runners-up receive $500 and an engraved plaque. The prizes are sponsored by American Airlines and the John S. and James L. Knight Foundation.

“You’re here because of your compassion. Your leadership. Your creativity. Your determination,” said Knight Foundation Miami Director Matt Haggman. “These are qualities that will stay with you your whole lives. They are also the qualities that will allow you to transform your world.”

Salma Abdelrahman giggled uncontrollably as judges announced her win in the English and Literature category. A few in the audience stood to give her a standing ovation.

In middle school, Abdelrehman was bullied for wearing a hijab. By high school, she turned her experience into Fabula Rasa, a powerful video project that explores Islamophobia, homophobia, racism and other issues of prejudice. The Coral Reef High student wants to study government and was accepted to Harvard University.

She shook with excitement after being handed the Silver Knight.

“I’ve been working very hard, and to look into the audience and see everyone who supported me is amazing,” she said. “It’s not really about me. It’s about the people willing to stand up and speak about discrimination.”

When Alejandrina Gonzalez-Reyes came to the U.S. from Mexico, she learned two languages: English and computer programming. Self-taught, the St. Brendan High student created an educational app that helps students learn science. When she’s not coding, Gonzalez-Reyes is running triathlons and half-marathons. She’s a winner in the Digital and Interactive Media category and she’s headed to Stanford University to study computer science.

“I thought about quitting doing apps in the beginning, but I kept trying,” she said.

His inspiration to help was born out of personal struggle. Fonseca was taken from his mother, who was abusive and addicted to drugs. Now, he helps foster kids as a volunteer at His House Children’s Home. Fonseca also takes the time to collect school uniforms for needy students, run an investment club and lead the Science National Honors Society, earning him a Silver Knight for business. His goal is to be an example to kids in the foster system.

“I hope I’m the type of person who can inspire them not to be a statistic,” Fonseca said.

It never occurred to Sophie Septoff that her blindness would keep her from excelling at dance, though plenty of others stood in her way. The NSU University School student is an award-winning choreographer and shares her love of the arts with other blind kids through Dance in the Light, a program she started at Lighthouse of Broward. Septoff is heading to Georgetown University to study issues of social justice. She won in the category of Music and Dance.

Holding the Silver Knight statue, she said: “I now have the responsibility to honor this, and to go out to make sure that on a larger scale, kids growing up can just be kids and not have to deal with the same stuff I did.”