The diversity expresses itself 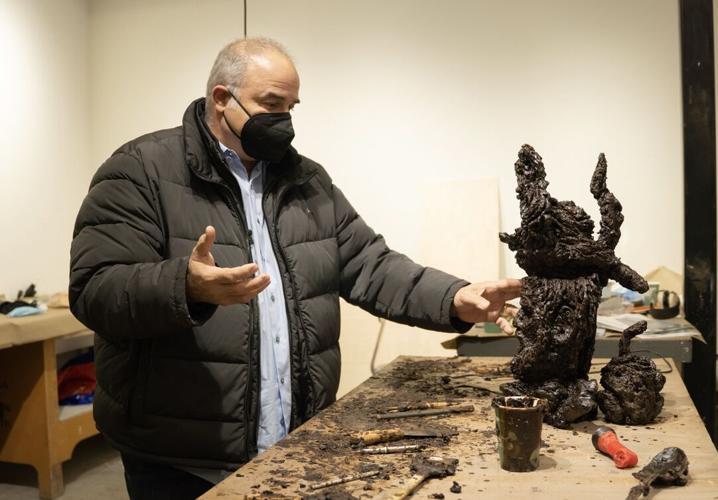 In the sculpture studio at Anderson Ranch, Xavier Cortada discusses a sculpture made with bronze, an artistry he said he’s never before worked with in his versatile career. Cortada, an award-winning artist and a professor at the University of Miami, has created renowned public art installations across the globe, addressing environmental and social issues.

‘The diversity expresses itself’

Fourteen Miami-based artists stepped onto the snowy grounds of Anderson Ranch Arts Center at the beginning of February, unaware of but open to what the next five weeks immersed in the mountains would bring.

For many, the moment marked their first time seeing snow, the Rocky Mountains and the state of Colorado. For all of these visiting artists, going from 6 feet above sea level to more than 6,000 feet above sea level has opened doors for their practices, perspectives and creative processes.

The diverse group of artists are part of the 2022 Oolite Arts’ Home and Away travel residency ­program. Running from Feb. 2 to March 9, the five-week experience is recognized as one of the most prestigious artist residencies in the country.

Established in 1984, Oolite Arts is a widely known organization that supports artists in Miami. Serving as both a resource and a community, Oolite provides studio spaces, exhibition opportunities and financial support for emerging and established local artists. Oolite’s Home and Away program launched in 2019 with Anderson Ranch being one of the original residency opportunities, said Dennis Scholl, president and CEO of Oolite Arts.

“This is our third year bringing Miami artists to Aspen, and we always purposely come in February because we want the experience to be something very different for them — an experience that will stick with them,” Scholl said.

Scholl — who is an award-winning documentary film producer and reputable contemporary art collector — stepped into his leadership role at Oolite five years ago and has since helped to grow the organization’s programming and elevate experiences for local artists.

With longstanding connections to art institutions worldwide, he also has worked to spread the rich diverse arts scene that thrives in Miami to other places through Oolite programming and residencies, such as Anderson Ranch.

“Miami is one of the most culturally diverse cities in the country — that’s how we live, everything that goes on here reflects that,” Scholl said. “People say frequently that ­Miami today is what your city will look like in 25 years, so it’s an important thing to bring a multilingual, multicultural group of artists to Aspen and the valley, and to any community.”

The Home and Away program now provides three other travel residencies throughout the year: Artpace in San Antonio, Texas; the Atlantic Center for the Arts in New Smyrna Beach, Florida; and the Rauschenberg Foundation on Captiva Island, Florida.

Artists participating in any of Oolite Arts’ Home and Away residencies, including Anderson Ranch, are provided with a stipend in addition to coverage of their travel expenses and accommodations — a crucial and distinguishing factor to the Home and Away program, according to Scholl.

A playground for artists

Selected by a jury out of Miami, this year’s 14 participating visual artists have taken over the arts center, working among the snow-covered mountains in their studio spaces with 24-hour, unlimited access to all of the resources and materials that the arts center nestled in Snowmass has to offer.

“It’s almost like a playground for the artists,” said Elizabeth Ferrill, artistic director of painting, drawing and printmaking at Anderson Ranch. “They have the freedom to explore mediums and artistic processes outside of what they specialize in, which I think really informs their practice, because they can think about their work in a different and unique way through that experimentation.”

Oolite artist-in-residence Chris Molina, whose filmmaking focuses on queer culture and the queer experience through an ­autobiographical lens, expressed how being at Anderson Ranch and exploring the Roaring Fork Valley has given him the opportunity to be more experimental.

“Driving in on our first day was really intense; I remember on the bus ride coming here, something we all said was, we feel so small because everything is so huge,” Molina said. “So, I think even just the change of landscape, and the change of altitude, has really influenced us and our art in these subtle ways.”

During a recent visit to the Powers Arts Center in Carbondale with his fellow artists in residence, Molina said he had an epiphany that art can be anything — it doesn’t have to ­follow specific rules.

“I have this VHS camera from the ’90s and I’ve been taking it around everywhere with us, recording what’s going on around me,” Molina said while sitting in the photography and new media studio at Anderson Ranch. “And then I come back here and monologue to my Mac, just whatever I’m feeling and put the two together.”

Throughout his stay so far, he’s experimented within his own artistic discipline and plans to try other mediums, such as ceramics and screen printing — an endeavor he said was inspired by the pop art on view at the Powers Arts Center.

In engaging with this particular community of artists, Molina has formed relationships that he knows will continue back in Miami, which is important not only to his craft, but also his growth as an artist.

“I feel like just getting the chance to experiment outside of what I do can lead to me expanding my own knowledge of what I can make and how I can create,” Molina said.

Like Molina, many of the artists have delved into their practices and experimented across other artistic disciplines. And whether this five-week program marks their first travel residency or one of many, the immense offerings at Anderson Ranch — as well as the unmatched opportunities throughout the Roaring Fork Valley — brings to fruition a career-advancing and insightful experience.

“The ranch is a magical place,” Scholl said. “The studio spaces are great, we bring in international curators for visits and there’s this bonding experience that happens between the artists over their five weeks together.”

Scholl discussed the significance of this residency, not only in terms of the opportunities presented to the artists, but also what this diverse group of ­artists brings to the Roaring Fork Valley.

Afro-Latina artist Diana Eusebio works across photography, textiles and fashion design to explore the lived experiences and intersections of global Blackness and Latinx identity. Eusebio’s ongoing project, “MIRROR: A Reflection of the Black and Latinx Diaspora,” is on view at the Art Base in Basalt through March 5.

“When it comes to my inspiration for a lot of my work, it’s really the Black and Latinx community — the diaspora and this feeling of intersectional and transnational coincidences or commonalities that we have within the diaspora throughout the world,” Eusebio said. “So, in my ‘MIRROR’ series at the Art Base, you’ll see a lot of portraits of people from the Black and Latinx diaspora, and I basically interview them, ask them how they want to be reflected and create these photos that are inspired by their stories and conversations.”

In a longstanding relationship with the Art Base, Scholl said this exhibition is an important extra element to the residency. Oolite tries to put on an exhibition by one of the Latinx artists in residency each year, said Scholl, in order to connect people and students within the Roaring Fork Valley to an artist who shares their identity.

Scholl mentioned that they try not to over-program the artists in order to give them the space and time they need to create. It’s a break from real life that allows them to engage fully in their art.

During their stay, all meals are prepared for the artists by the Anderson Ranch chef, he said, so that they don’t have to worry about cooking for themselves or cooking for their children — an element to the program for which all of the artists expressed gratitude.

Oolite artist-in-residence Xavier Cortada was up until nearly three in the morning working in the digital fabrication studio on a software program he’d never before tried, called Rhinoceros 3D. Cortada is an award-winning multidisciplinary artist whose public art installations addressing issues like climate change and social injustices can be seen around the world.

He’s attended residencies from Africa to Antarctica and describes Anderson Ranch as an “unexpected aperture to a creative,” stating that while most residency programs leave artists on their own, the guidance of serious experts in communion with other artists is a gift.

“What’s different about this program from many of the other residencies is — and this is the real gift of Anderson — is that you have a team of studio managers who are here to work with you and teach you and push you. Just like I was pushed ’til past 2 a.m.,” Cortada said.

During his 15-minute break between teaching Zoom courses at the University of Miami, Cortada explained that the late-night 3-D modeling project, along with his newfound work with bronze sculptures, will reach beyond the Roaring Fork Valley — both serving as pieces to two larger projects, one dealing with child conviction and the other ­relating to climate change.

“Anderson Ranch has given me the air to imagine beyond what I had originally done as an artist, which is work across many mediums,” Cortada said. “But the work I did in the 3D studio will go all over Miami-Dade County. And I think the reach of Anderson isn’t only individually to an artist, but it’s what an artist gains from here and disseminates to a broader community.”

Cortada is not the only Oolite artist creating crucial narratives through his works and discovering new skills along the way. French-Caribbean artist Marielle Plaisir said she’s always trying to find the most adequate medium to express her narrative.

In exploring the concept of social domination in a contemporary world, Plaisir has spent her time at Anderson Ranch working with a mix of materials like bronze, porcelain, fringe and other fabrics to create a multidimensional cake, crafting a narrative around a single ingredient.

“I’m talking about sugar; sugar was part of the slave trade in the 16th and 17th century, and European countries took this sugar to build beautiful pastries; during this time, they installed slavery in the Caribbean islands — this is my narrative,” Plaisir said. “So it’s a question of sugar, it’s a question of social domination through one ingredient, which is the sugar, which still exists today.”

From their interdisciplinary practices and the powerful narratives they’re communicating through art, to the backgrounds and identities of the artists themselves, the 14 Miamians have energized Anderson Ranch and the Roaring Fork Valley. Spending an afternoon at Anderson Ranch with the talented Oolite artists in their studios, the diversity clearly expresses itself.

Though the residency comes to an end on March 9, the arts center has an exhibition featuring work by all of the Miami artists. It’s free and open to the public, and runs through March 25.