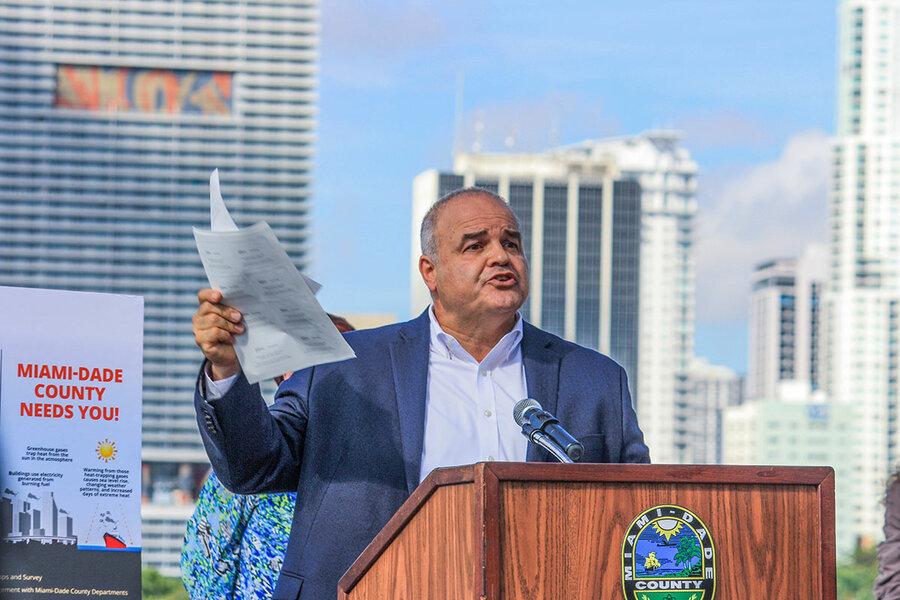 Artist Xavier Cortada has developed projects related to climate change, including the “Hello” project, which he presented at PortMiami in November. He says the projects weren’t “about intimidating or sensationalizing or scaring you to death, but were about letting you know that you have agency.”

At the star-studded Art Basel fair in Miami Beach recently, amid the galleries and parties and installations, artist Xavier Cortada handed out name tags of a particular variety.

“Hello,” the stickers said. “My elevation is …” He filled out his own with information for Miami, his hometown: 2 meters (about 6.5 feet) above sea level, an elevation clearly vulnerable to ocean rise caused by climate change. Mr. Cortada had passed out similar tags at the COP26 international climate gathering in Glasgow, Scotland, last fall – a participatory art project, he says, that was meant to transcend individualism and build connections. “Hello, my fear is …” read one name tag. “Hello, my hope is …” read another.

“These badges served as an artistic way of just getting folks to communicate with each other and to share their humanity, their vulnerability, their perspectives,” Mr. Cortada says. And that, he says, is necessary to help fight climate change – the goal of his art ever since he traveled to Antarctica in the mid-2000s with a National Science Foundation program. There, he recalls, he was “horrified” to realize he was holding in his hands ice samples that could very well melt and be part of flooding of his city.

“It radically transformed my practice to one that was almost exclusively dealing with climate – not in a way to despair but to solve,” he says. “I created all these projects that weren’t about intimidating or sensationalizing or scaring you to death, but were about letting you know that you have agency. … What I want is art that understands its role as a vehicle to engage others and to problem-solve.”

Across the creative world, artists are increasingly focusing their work on climate. Mainstream pop stars such as Billie Eilish sing – and lobby – about it, while other performers, from Dar Williams to Tamara Lindeman’s The Weather Station, feature it in new albums. It is central to a number of new fiction books, such as Booker Prize shortlist works “The New Wilderness” by Diane Cook and “Bewilderment” by Richard Powers. An increasingly popular utopian science fiction and art genre, called “solarpunk,” hinges on a new eco-friendly future. And now a Netflix comedy called “Don’t Look Up,” starring Leonardo DiCaprio and Jennifer Lawrence, is using an Earth-threatening comet as a thinly veiled metaphor for the issue.

“Increasingly, people are realizing we need these different levels of creativity – whether it’s scientific creativity or visual creativity,” says Caroline Juang, who is both an artist and graduate student in climate science at Columbia University’s department of Earth and environmental sciences. “We need to make visualizations of what the world could be.”

The climate theme has even shown up at venues such as London’s Fashion Week, where this past fall the studio Atelier Tammam featured scientist Ed Hawkins’ “Warming Stripes” – a graphic blue-and-red-lined representation of increasing temperatures over time – on ready-to-wear capes, scarves, and dresses. In Cambridge, Massachusetts, a recent theater production called “Wild: A Musical Becoming” revolved around climate anxiety, part of an intentional theater industry effort on global warming. And at the COP26 conference in November, art and culture took a prominent role in several panel discussions. 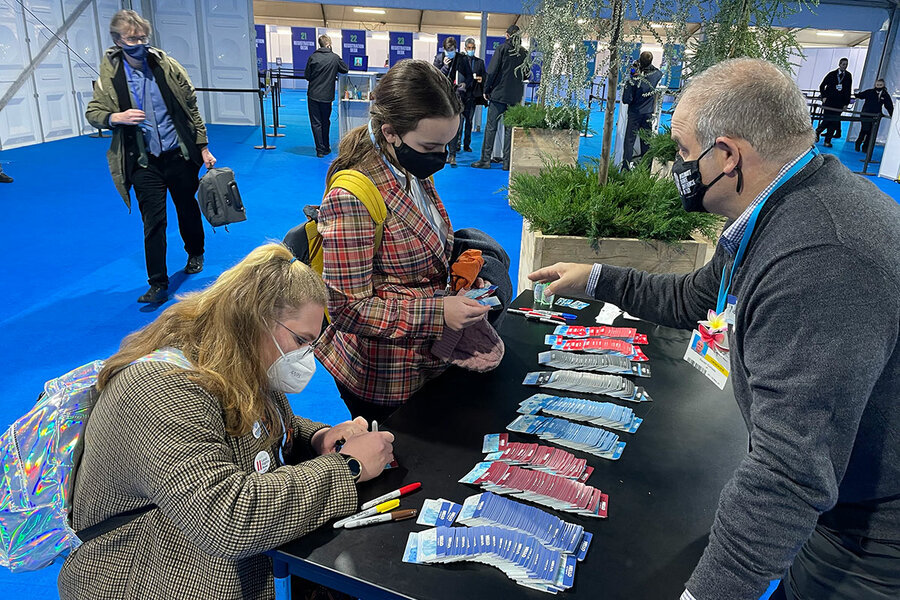 This broadened approach is becoming more important not only to artists but also to climate scientists themselves. More and more, those in academic settings say, researchers are stretching across disciplines and collaborating with a variety of artists in hopes of building a new type of response to what many see as an existential problem.

“What does it mean for people to work on climate?” asks Ben Mylius, a writer and graduate student at Columbia who helped found the school’s Climate Imaginations Network. “From the university perspective, it raises questions for every discipline. No one field, or industry, or way of seeing the world can see it all.”

Humanities and the liberal arts are well suited to address the ethical, moral, and political questions that inevitably come up with climate change, he says. Meanwhile, fine artists and writers can bring emotion and creativity that engage a wide audience, while also challenging what Mr. Mylius calls the “easy” climate storylines of despair on one hand, and a “techno-utopian, someone-else-will-save-you” complacency on the other. “How can we really bring our creativity to bear, telling stories of climate and the future that don’t take the easy way out?” he asks.

Artists focusing on ecological issues is not new, of course. Many have done so since the environmental awareness movement of the 1960s, points out Patricia Watts, founder and curator of Ecoartspace, a membership group for artists addressing environmental issues. But the number of artists getting involved has increased exponentially, she says, as the impacts of climate change – such as wildfires, floods, and other extreme weather events – become part of daily life.

“As we grow more conscious of all the issues, there is more and more work being done, and more and more artists doing this work,” Ms. Watts says. And this growing creative movement, she and others say, is crucial for expanding the way society understands climate change – and possible solutions to it. “Artists can be divergent thinkers and problem-solvers,” Ms. Watts says.

The theatrical production “Wild,” which premiered last month at the American Repertory Theater, reflects this new grappling. It revolves around the tension between teenage character Sophia’s growing environmentalism and her mother’s desperation to save her family’s livelihood by selling their land to an energy extraction company. In one scene, Sophia sings a ballad, “Dear Everything,” while her mother, Bea – played by Broadway legend Idina Menzel – faces off behind her against Oak, her environmental studies teacher.

But the audience doesn’t see two “sides” onstage. They see a mother and teacher who both care about a young girl. Their different perspectives about climate change aren’t political.

“You can broach the issue and you can invite everybody to the table,” says New York-based playwright Chantal Bilodeau, founding artistic director of The Arctic Cycle, an organization that uses theater to foster conversation about climate change. “It doesn’t have to be, ‘We’re going to look at this from an ideological point of view.’ It’s just, ‘We’re going to look at this through a personal story, like how does this affect our lives?’” 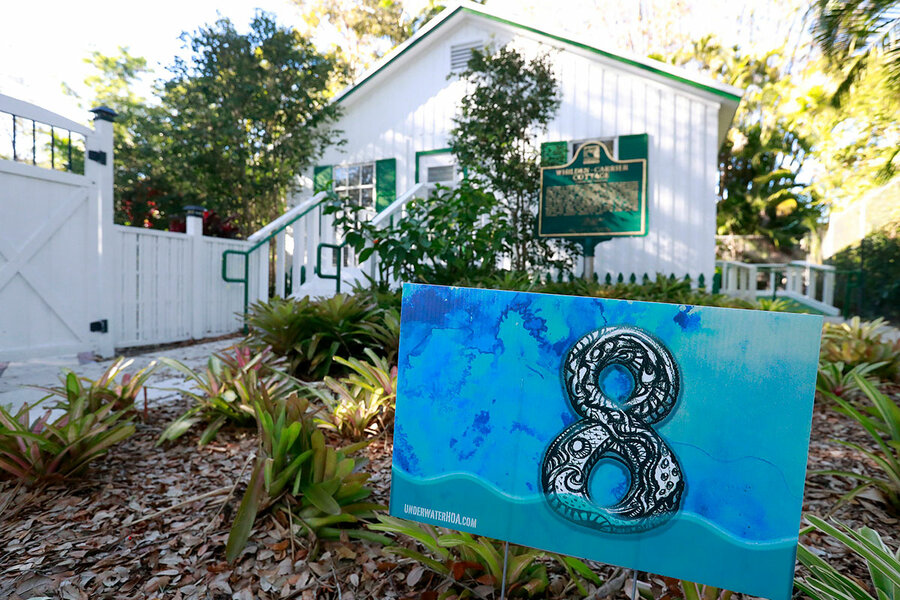 Wilfredo Lee/AP/File
A yard sign stating that the area is 8 feet above sea level sits in front of artist Xavier Cortada’s studio on Feb. 6, 2019, in Pinecrest, Florida. Mr. Cortada created an “Underwater Homeowner’s Association,” a kind of community installation to promote awareness about rising sea levels. Along with displaying the signs, participating homeowners discuss how their suburban community can prepare for the effects of climate change.

Since Ms. Bilodeau began The Arctic Cycle in 2008, the project has developed and produced new plays, hosted workshops, and maintained a network for artists who work in climate change. At the core of its work, she says, is the idea that creative storytelling can lead to more change than traditional advocacy.

“If the first impulse is to solve a problem or to get people to do something, it can turn into really bad theater, because then you’re not using theater for what it’s meant, which is to help invite people into reflection or exploration of a particular issue,” she says.

That same mission of exploration anchors the Boston Children’s Chorus’ 2021-2022 season, “Now Is the Time.” The chorus has been performing songs with underlying messages of climate change, and has partnered with other organizations with similar goals. Members of the chorus also played a group of children onstage in “Wild.”