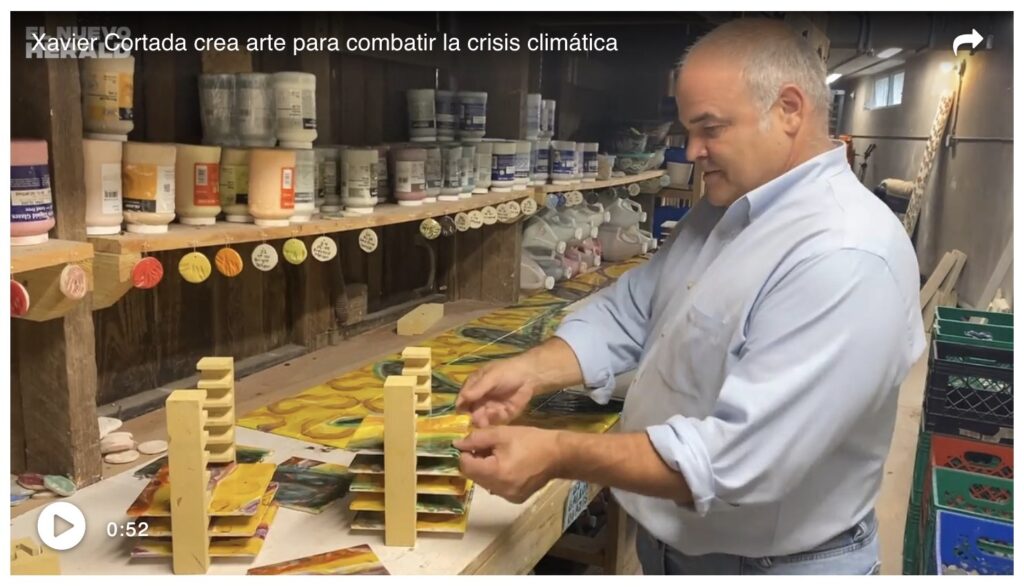 Five years ago, a popular book, “The Water Will Come,” introduced the world to Sweetwater’s vulnerability to climate change. Author Jeff Goodell devoted a chapter to describing how, with its low elevation and proximity to the Everglades, the West Miami-Dade city is even more vulnerable to sea level rise than Miami Beach.

In Sweetwater, Goodell writes, water will come from all directions ­— from the Everglades to the west, from saltwater intrusion into the limestone on which the city (and all of Miami) was built, and from the east, where stormwater pumps service coastal cities first, threatening to leave water with no way out.

A chapter of the book, “Real Estate Roulette,” also introduced artist and community activist Xavier Cortada. Cortada, who has had a long and varied relationship with the city of Sweetwater, served as a guide for Goodell and his readers from all over the world, introducing them to myriad complexities of a city that has failed to understand its vulnerability to the climate crisis. Since 2017, the situation hasn’t changed much. 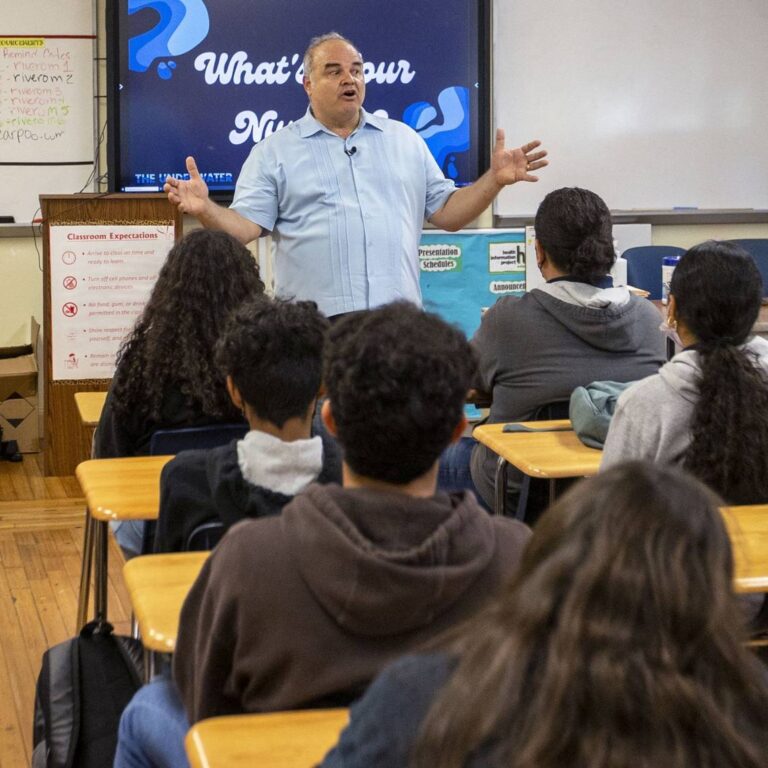 Cuban artist Xavier Cortada speaks to a science class about his eco project dubbed, ‘The Underwater’, which allows high school kids to learn about their home’s elevation above sea level and then asks them to plant yard signs with said elevation in their own yards in an effort to catalyze conversation and action around the climate crisis at Miami Senior High in Miami, Florida, on Tuesday, April 5, 2022. Daniel A. Varela dvarela@miamiherald.com

THE VULNERABILITY OF THE WEST

When I met with Cortada, he was planning his next community art project, which will premiere in Sweetwater this fall.

We sit at a table in the main building of Pinecrest Botanical Gardens, where Cortada is the artist-in-residence and has his studio and exhibits. To the right, the Hibiscus Gallery is filled with Cortada’s artwork — drawings of mangrove seeds, paintings of brightly colored plants, information about the artist’s many collaborative projects, and to the side, a wall entirely decorated with propagules in vases of water.

To many young people, the wall is familiar. Cortada and his team have installed a version of it in every public library in the county and several colleges. Outside, in the gardens, a storm arrives.

“The skepticism, I think, has diminished. But the action hasn’t improved,” says Cortada when asked what has changed in Sweetwater since the interviews for Goodell’s book in 2016.

While more people are aware of the consequences of climate change, many still don’t understand the threat it poses to their homes and livelihoods. Especially in a city with fewer resources like Sweetwater, where for many people their home is their biggest investment, the possibility of sea level rise can send property values dangerously low.

According to Cortada, much of this lack of urgency has to do with these cities being far from the ocean. The threat of sea level rise is not immediately visible.

“If you live out west, you’re clueless. You’re clueless that your home, your driveway, is on the river of grass, and that roseate spoonbills and crocodiles used to be there,” Cortada says. “You are not aware of your elevation.”

This is why Cortada’s art focuses so much on education and empowerment to act, because he sees it as necessary for people to be able to advocate for themselves. 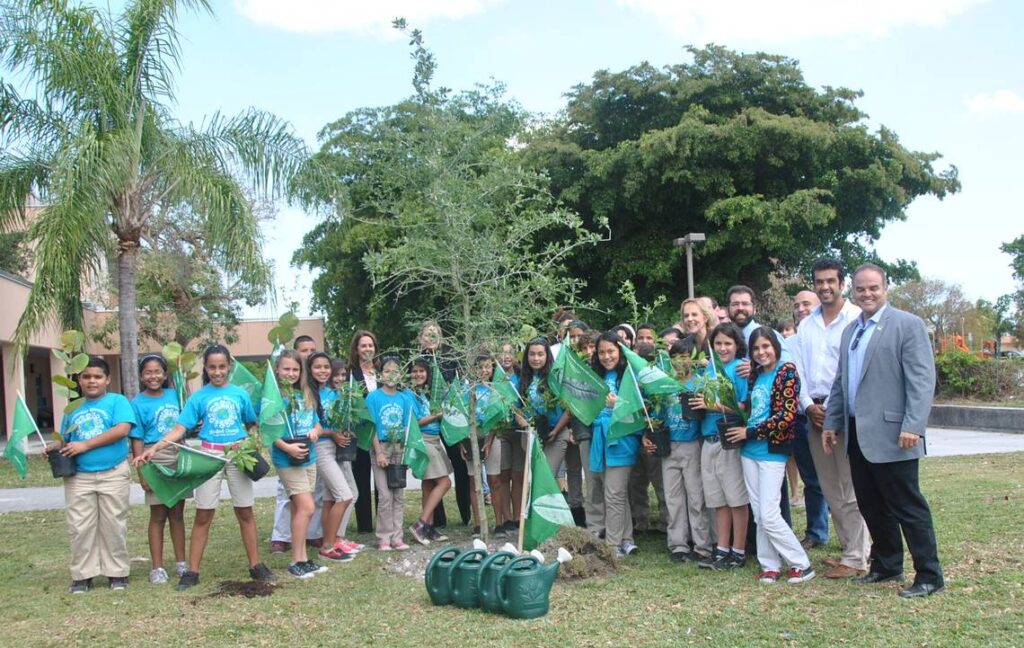 “I want the folks in Doral, Hialeah, Sweetwater, Medley, West Kendall, Florida City— all these communities that hug the Everglades — to understand what their climate risk is,” Cortada says. “And not just in elevation, which is the most important thing I’m going to do, but also about comparing their risk to the risks they see others take.”

Cortada shows the example of an area like Brickell, filled with new skyscrapers. To people who don’t keep up with climate change and development policies, it would seem that there isn’t as much risk of sea level rise. If it was such a big risk, the thinking goes, why are people spending millions to build new buildings by the sea?

But it’s not that simple.

The difference, says Cortada, is that the people investing in high-end Brickell developments, for instance, are not the same people in the western suburbs. For someone in West Kendall, it’s likely that a drop in property values or losing the home would be devastating.

The eco-artist highlights the difference between these two ways of living through the climate crisis: “There are two cities and two timelines. And that’s what I desperately need Miami to understand.” 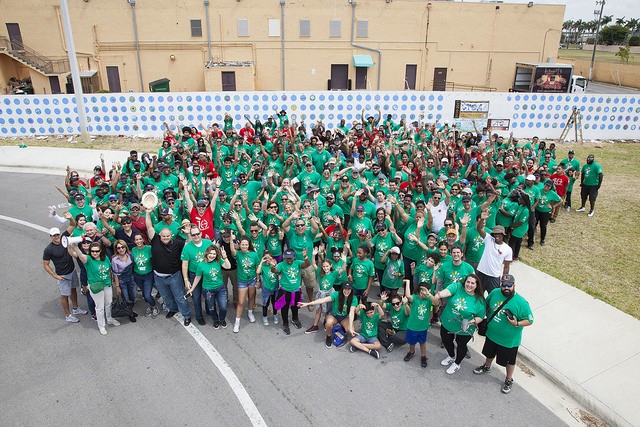 Xavier Cortada began his work in Sweetwater more than 10 years ago, when as an advisory board member at Florida International University’s Honors College, he led a collaboration with students at Sweetwater Elementary, where his nephews studied, and a group of FIU students. It was extension of his “Native Flags” project, in which students planted native Florida trees in front of their homes. Together with a green flag symbolizing the project, the tree represents a ‘reverse conquistador,’ according to Cortada.

“That was a beautiful relationship that continued through time,” Cortada says of her relationship with Sweetwater. That project was just the first of dozens the artist would do with the elementary school over the years. Other projects included “Flor500,” which asked students to plant one of 500 species of wildflowers in their gardens, dedicating the flowers to 500 historical figures; “Longitudinal Installation,” in which students recited quotes from people who will be affected by climate change in every corner of the world; “Seahorse Society”; “Florida is… Nature.”

At the root of these projects is the desire to create art that is public and accessible. The goal of his art is threefold — to inform people about the environment or climate change, stimulate conversations, and move government to take action on climate change. 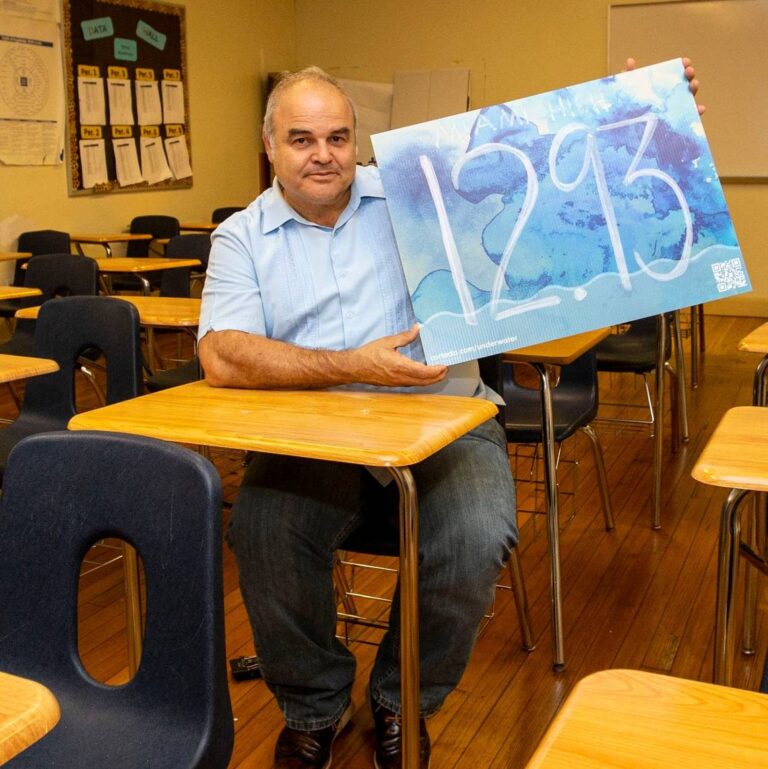 Cuban artist Xavier Cortada holds up a yard sign marked with the elevation of Miami Senior High in Miami, Florida, on Tuesday, April 5, 2022. The eco project dubbed, The Underwater, allows high school kids to learn about their homes elevation above sea level and then asks them to plant yard signs with the marked elevation in their own yards in an effort to catalyze conversation and action around the climate crisis. Daniel A. Varela dvarela@miamiherald.com

‘THE UNDERWATER’ IN SWEETWATER

Now, with the help of his studio manager, Adam Roberti, Cortada is getting ready to release “The Underwater.”

The project asks participants to paint an “underwater marker” with the elevation of their homes above sea level and display it in their front yards.

In collaboration with the city, Cortada will bring the project to Sweetwater Elementary so children can learn about their vulnerability to sea level rise and come up with creative solutions for their city. Cortada is also going to talk to the public and include them in the large-scale project.

Other elevation markers will be seen on 107th Avenue, West Flagler Street, the area around Dolphin Mall, and other major areas of the city.

Cortada describes it as “just creating artistic interventions that make people curious enough to wonder, ‘What is this?’ ”

The main purpose: So residents of cities like Sweetwater and other western areas can protect themselves and develop their own creative solutions for their homes and their city.

“I’m trying to help us … understand how we are literally interconnected with nature, with ecosystem services, and understand that it’s not all about instant gratification, instant gain,” Cortada says. “It’s all about having a tempered approach and understanding what a real good quality of life is.” 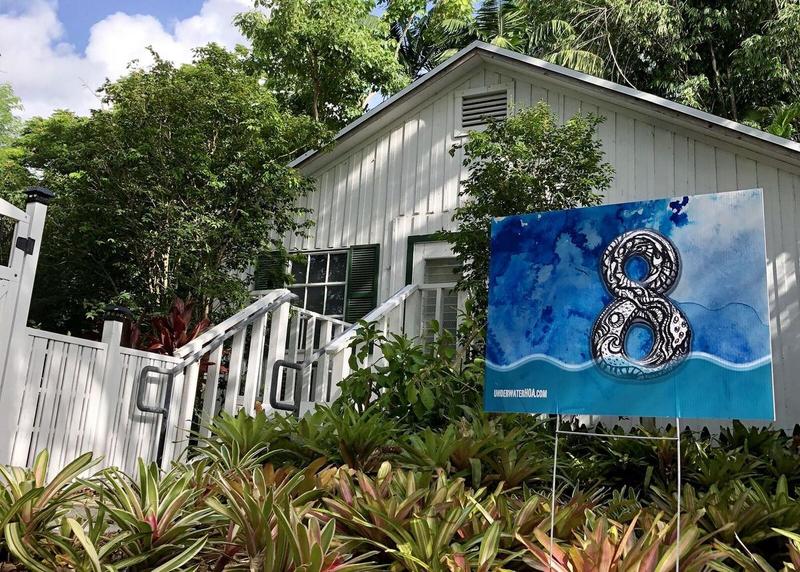 See the original article and video at: https://www.miamiherald.com/news/local/environment/article263038668.html