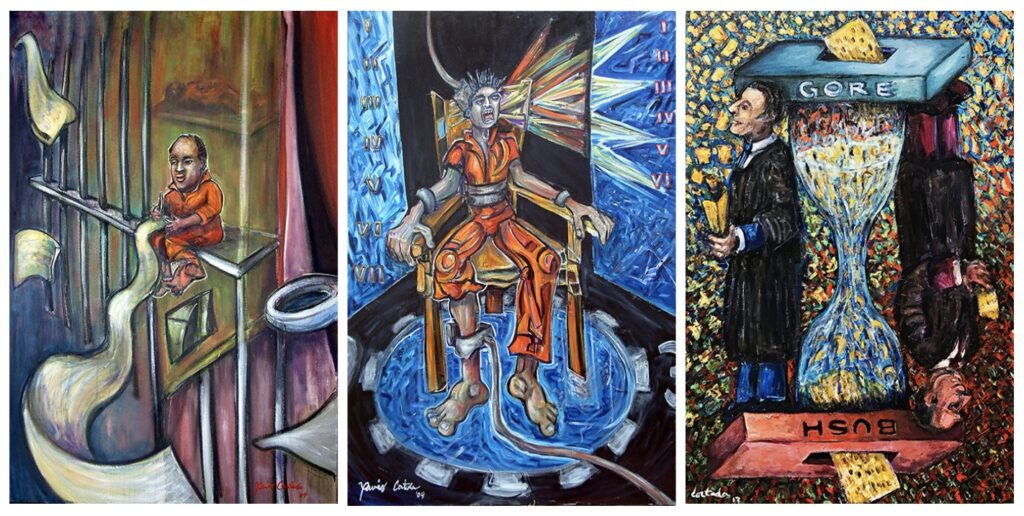 Artist and lawyer Xavier Cortada has created 10 striking paintings, each depicting a significant Supreme Court case originating in Florida. Cortada is a longtime Floridian who received his law degree from the University of Miami and is now a professor at the University of Miami Department of Art and Art History; his work combines his legal training with his artistic vision of how each Supreme Court decision shaped the nation. The series of paintings was first exhibited in the rotunda of the Florida Supreme Court before being moved to a permanent display at Florida International University.

One of the more powerful images is of Clarence Earl Gideon, who was charged with burglary in 1961 and was forced to represent himself at trial because he was too poor to afford a lawyer. After being convicted, he handwrote a petition for writ of certiorari in pencil from his jail cell. In a watershed decision in Gideon v. Wainwright, the court ultimately ruled in Gideon’s favor, holding that the Sixth Amendment guarantees a right to government-funded counsel for indigent criminal defendants. Cortada depicts Gideon sitting on the edge of his cell, barefoot and wearing an orange prison jumpsuit, writing on what appears to be a roll of toilet paper.

As Professors Paul Marcus and Mary Sue Backus explain in their accompanying essay, Cortada’s grim image reminds us that Gideon’s petition was “the longest of long shots.” It was both an “act of desperation” and an “act of faith in the United States constitution.” That faith was not misplaced. In Gideon, the court acknowledged for the first time the “obvious truth” that a criminal defendant could not get a fair trial without a lawyer. Gideon not only won the right to a lawyer for all indigent criminal defendants facing jail time; he also won his own freedom. Five months after the Supreme Court’s ruling, he was granted a second trial. This time, represented by a lawyer, he was acquitted.

Marcus and Backus spend much of the essay discussing the questions that followed in the wake of the court’s decision in Gideon. Do indigent defendants deserve representation when they face no jail time but significant collateral consequences of a conviction, such as loss of employment, professional licenses, government housing, or (for noncitizens) deportation? And what should happen when a criminal defense attorney performs poorly? As the authors explain, the case law so far suggests that the level of “effectiveness” required to satisfy the Constitution is shockingly low. Cortada’s painting reminds us that Gideon’s petition started a constitutional debate that is still ongoing.

One of Cortada’s more jarring images concerns the court’s 1976 decision in Proffitt v. Florida, a companion case to Gregg v. Georgia, in which the court revived the death penalty after a four-year de facto moratorium. Cortada depicts a man strapped into an electric chair, his face twisted in pain. Roman numerals line the walls on one side of the chair.

The accompanying essay by Professor Corinna Barrett Lain explains the painting is particularly powerful because Florida has had well-documented problems with its electric chair. Dubbed “Ol’ Sparky,” the chair caused a number of botched executions in the 1990s. The numbers on either side of the chair are also significant. Proffitt upheld Florida’s statute requiring courts to weigh a list of aggravating and mitigating factors before imposing the death penalty. In Proffitt and its companion cases, the court concluded that such factors provided rational standards for the death sentence, satisfying the Eighth Amendment’s prohibition against “cruel and unusual” punishment.

Lain, like Cortada, is critical of the decision. She writes that studies have shown the futility of such formulas, which lead many jurors mistakenly to conclude that they are required by law to impose the death penalty in cases in which the aggravating factors outweigh the mitigating ones, rather than merely allowed to do so. She further critiques some of the factors in the death-penalty laws of Florida and other states as irrational and inconsistent. And she worries that balancing these factors allows jurors to distance themselves from the consequences of the decision. Such formulas enable us to “numb ourselves with numbers,” she declares.

Dean Erwin Chemerinsky’s essay addresses Bush v. Gore, surely the most controversial of the 10 cases depicted. Cortada’s painting is dominated by an hourglass, with a ballot box for Bush on one end and Gore on the other. The background is an impressionistic swirl of ballots and chads. Cortada’s image suggests that time is running out.

Chemerinsky’s essay, titled “Haste Makes Mistakes,” focuses on the role of time pressure in the court’s decision. As he reminds us, the petition for a writ of certiorari was filed on a Saturday, the case was argued on Monday, and the court issued its decision on Tuesday night. At the time, the court justified its extraordinary decision to take and decide the case at warp speed as essential to avoid an imminent constitutional crisis.

Chemerinsky argues that the decision in Bush v. Gore violated principles of federalism, among other constitutional doctrines and norms. He blames these errors on the court’s mistaken belief that it needed to act immediately. Chemerinsky walks the reader through the sequence of events that would have followed had the court not stepped in, and concludes that the system would have worked as intended without the court’s involvement. (And he concludes that Bush likely would have been designated the winner in any case.)

As Mirow explains in his introductory essay, Painting Constitutional Law “seeks to disrupt established perspectives on constitutional law by asking highly respected scholars to see their fields through Cortada’s vivid images,” producing a “fresh and expansive exploration” of American law and life. Readers who are looking for a new approach to constitutional principles should start here.