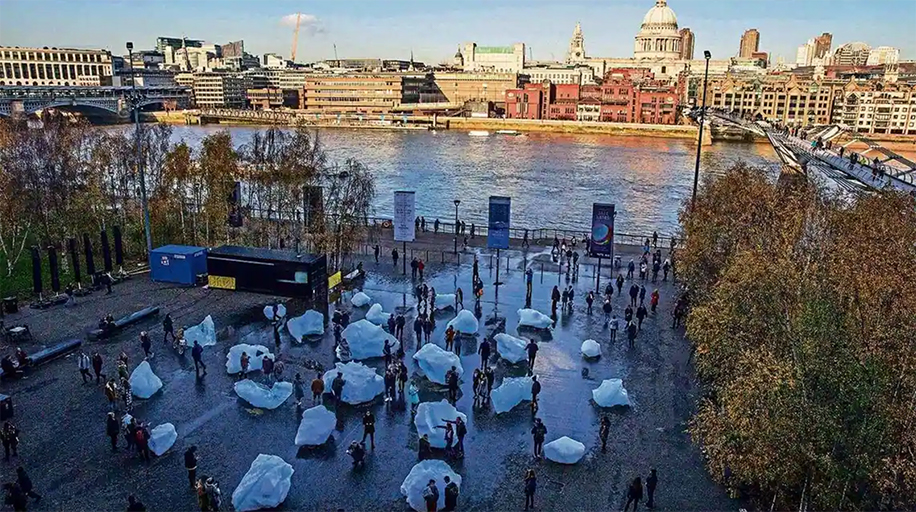 Danish Icelandic artist Olafur Eliasson, a Goodwill ambassador with UNDP Climate Action, is famous for his many installations that revolve around climate change. His 2014 work called Ice Watch first debuted in Copenhagen. Twelve blocks of ice, weighing a collective 100 tons, were transported from a fjord in Greenland to Copenhagen’s City Hall Square. They were deliberately arranged in the formation of a clock, alluding to the countdown humanity faces as temperatures and sea levels continue to rise. His 2019 work, The Presence Of Absence Pavilion, is a cast bronze sculpture moulded around the negative space of glacial ice—a permanent memorial to a loss of glacial ice.

Artists from time immemorial have always derived inspiration from nature, be it the ocean or the forest or animals. Great art also inspires us to think, communicate and act. In recent times many concerns in the natural world, from ocean levels rising and ecosystems collapsing, has led to a new breed of artists who use their work as a platform to raise public awareness about environmental issues, and lead the public towards a more sustainable world. They have come out with provocative and meaningful pieces of art that can hopefully change the narrative about climate change and the environment.

Cultural theorist and curator Ranjit Hoskote says contemporary artists have been engaging with the violent relationship between technologically arrogant humankind and vulnerable nature. Be it Robert Smithson’s memorable earthwork piece Spiral Jetty (1970), Olafur Eliasson’s extraordinary Weather Project (2003), Argentinian artist Tomás Saraceno’s cross-species collaborations with spiders or Amar Kanwar’s meditations on the climate crisis and violation of human, animal and plant rights, The Sovereign Forest. “Each of these works makes a powerful claim on the viewer’s consciousness, reminding us that we are not merely consumers of aesthetic experience but also citizens and contributors to the planet’s well-being. These artists remind us forcefully of our responsibility as tenants, rather than as owners, of planet earth,” says Hoskote.

Saraceno’s art intersects the fields of art, science and sociology. He is fascinated with spider webs and has created installations of a gargantuan scale that allow people to experience being in a suspended web, giving birth to his Cloud Cities series. His vision is that in the future humans will be able to live in a connected way, in a sustainable modular city floating above the clouds.

In 2012, his exhibition On the Roof: Cloud City at The Metropolitan Museum of Art in New York featured a large-scale sculpture made of modular compartments that visitors could climb inside. The artist is most famous for his ethereal-looking floating sculptures in his Aerocene series, first publicly displayed during the UN climate talks in Paris in 2015. These sculptures float as the sun heats up the air that fills the sculptures, in sync with the artist’s vision that humans can travel in the future without burning fossil fuels or consuming any other form of energy that pollutes the earth.

Xavier Cortada, an American artist and Florida native, is famous for his socially engaged art projects. His Miami Mangrove Restoration Project has led to an annual Reclamation Project where volunteers collect mangrove propagules in coastal areas and distribute them across the community, “reclaiming” urban areas that once flourished with mangrove forests. The propagules are nurtured into seedlings and eventually planted along coastal areas to create new habitats. The artist also created ice paintings using sea ice, glacier and sediment sample when he visited Antarctica in December 2006 -January 2007.

In his latest community art collaboration, Underwater HOA, he asked the homeowners in the village of Pinecrest to create painted yard signs and a blue wave which will show how many feet of melting glacial water must rise before their property is underwater. This project aims to generate awareness on rising sea levels, and engage Floridians to take action against climate change. “By mapping the crisis to come, I make the invisible visible. Block by block, house by house, neighbour by neighbour, I want to make the future impact of sea level rise something no longer possible to ignore,” says Cortada.

John Sabraw, an activist and environmentalist, is a talented artist and professor from Ohio. He along with another professor and students developed a process where usable iron pigments were filtered from toxic water of abandoned coal mines in the state. This iron sludge is then dried and milled and added to acrylic polymer or linseed oil to make paints. Sabraw uses these bold yellows and reds paints in his artworks, and all his art is produced in a eco- conscious manner.

Naziha Mestaoui, a Belgo-Tunisian artist who died earlier this year, created an art installation called One Beat, One Tree which she presented at the 21st UN climate conference in Paris in December 2015. She created a forest of light in 3D while inviting the public to plant a seed of light. Projected on to the city’s landmark buildings, the virtual forest grows with the rhythm of the heartbeats of the people who participate. According to an obituary of the artist published on France-based Green Cross France et Territoires’s website, “the trees chosen and paid for by participants led to the planting of 100,000 trees in sites ranging from Brazil and Peru to Kenya and India that have not only helped fight climate change but improve the lives of local people”.

Many photographers have also put climate change and the environment centre stage with their work. The US generates more e-waste per year—9.4 million tons—than any other country. Seattle-based Chris Jordan is famous for his powerful images of mass consumption, with his series Intolerable Beauty: Portraits Of American Mass Consumption. His works show the tech debris we leave behind, from massive dumps of cellphones to cars and circuit boards, telephone chargers, all piled in mountains of rubbish. Jordan visited landfills and recycling centres to photograph vast piles of discarded products.

Closer home, Sudarsan Pattnaik, an Odisha-based sand artist, makes gigantic detailed sculptures from sand—his popularity can also be attributed to the fact that he chooses very topical issues in his art. One of the recurring themes used by him is climate change. His works have dealt with saving the trees, “Go Green” initiatives, managing plastic wastes and pollution of seas and oceans.

In Mumbai, to create awareness about plastic pollution, the Maharashtra State Innovation Society, in collaboration with art-based startup Floating Canvas Company, installed artwork made up of plastic bottles: a 27ft-tall dark Spiderman, called the “plastic monster”, near the Bandra-Worli sea link.

According to the UN, each year at least eight million tons of plastic end up in oceans. Singapore-based Chinese artist Tan Zi Xi, whose installation Plastic Ocean was part of the St+art India’s Sassoon Dock Art Project organised in Mumbai in 2017, worked with over 400kg of plastic to raise awareness about plastic waste polluting Mumbai’s coasts. Hundreds of plastic bottles and cartons hung low from the ceiling under a dim blue light in her installation. On her Instagram page, Tan Zi Xi talks about the inspiration and process behind Plastic Ocean. “Every thoughtless flick of plastic into your dustbin may contribute to the swirling mass of plastic drifting across our oceans,” she writes.