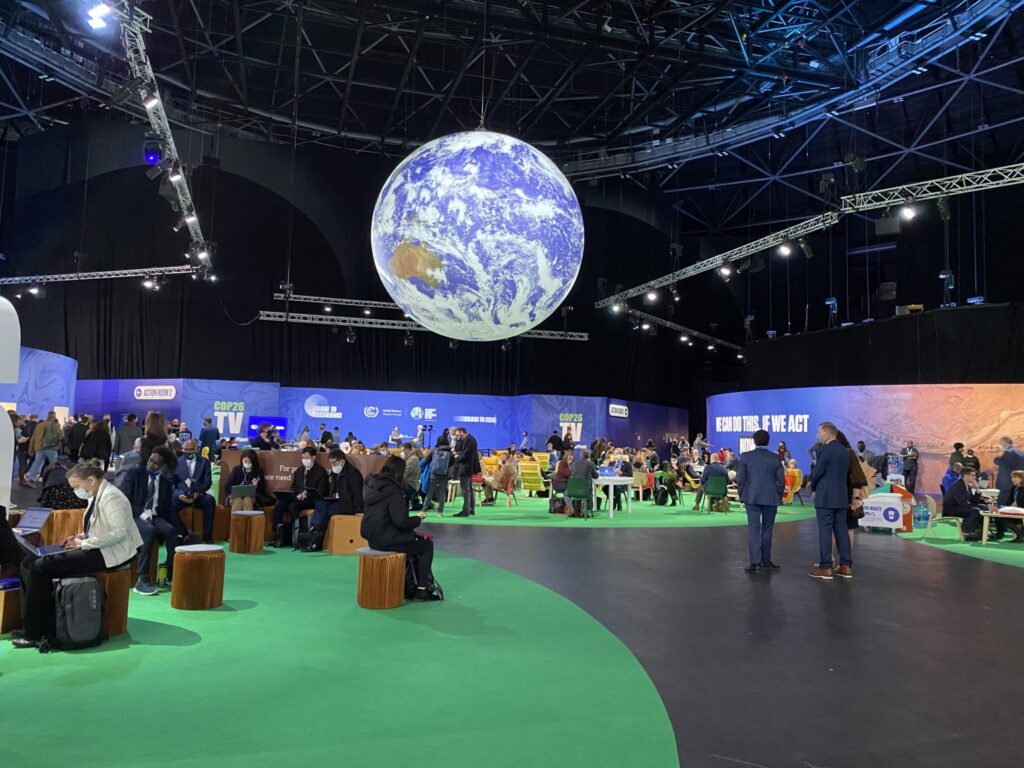 On the 10th day of COP-26 in Glasgow, we, the participants from Kyrgyzstan, held an online meeting with climate activists in the country. I found out that only seven Kyrgyz environmental activists staged a special protest in Bishkek supporting a protest rally in Glasgow. Ironically, Bishkek is now one of the most polluted cities in the world.

These days at COP-26, I’ve seen various movements, met with famous environmental bloggers, and interviewed a professor who covered climate change in art. While I was searching for someone who could make a comment on an early environmental educational program in the United Kingdom, I approached a woman in the Nuclear Energy Pavilion. She was very polite and nice. We had a wonderful conversation about nuclear energy, about teaching it the right way to school children, and introducing it to people. At the end of our dialogue she gave me a card. When I went back to the hotel and searched Google for her name, I saw Dianna Cowern, the @thephysicsgirl, a well-known climate activist who had raised more than $300,000 for the environment alone! If such activists were in Kyrgyzstan, would they be able to help solve Bishkek’s polluted air and reduce the melting of glaciers that are in danger of extinction by 2050?

Another interesting incident happened outside the COP-26 building. Usually there are various protests going on outside of the venue. I saw one interesting campaign called “Coat of Hopes.” Singing activists with the “Coat of Hopes” outside COP26 in Glasgow. Credit: Baktygul Chynybaeva

Several climate activists would take a long coat, embroidered from various small fabrics, put them on someone, and sing amazing songs. When I became interested in them and started photographing the whole process, they invited me to wear the coat myself.

The feeling I had when I wore the coat was amazing. It is very warm, but at the same time very heavy. Each square of fabric on the coat reflected the climatic conditions of the world and the cities of various climate activists who have worn it. On it were pictures of the melting Arctic ice and glaciers. Hundreds of climate activists made this coat from thousands of materials and handcrafts. Activists walked thousands of miles to Glasgow to make an action. The idea is that everyone on the planet must fight climate change together—that it can be overcome with unity.

Another exceptional person was Xavier Cortada, who organized the “Hello” campaign at COP-26. He was a professor of art at the University of Miami. When I was talking to him, he asked me about my country’s sea level, and I was happy to say that I am living in a high mountain region three to four thousand meters above the ocean. He immediately asked about the glaciers. When I told him that small glaciers in Kyrgyzstan could disappear by 2050, Cortada was so upset. He explained that he is afraid of it because Miami can slip under the sea very quickly if Kyrgyz glaciers melt. He also talked to me about how he believes we can bring changes to the global dialogue on the climate crisis through fine art.

COP-26 in Glasgow will soon end, but no one knows what other kinds of surprise meetings are waiting for a journalist who comes from Kyrgyzstan, the country whose glaciers are melting so fast.