Planting for the future… mangroves at Pinecrest Gardens

Planting for the future… mangroves at Pinecrest GardensXavier CortadaAugust 5, 2020February 15, 2021 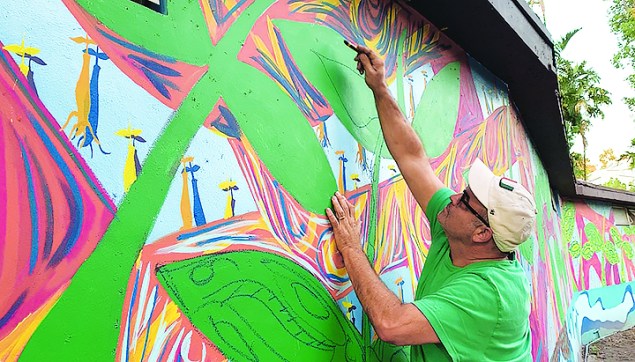 BY ALANA PEREZ (AUG. 3 2020) – Eco-Art is at the very core of our cultural fiber and artist in residence, Xavier Cortada, leads the charge.

At its core, Miami Mangrove Forest functions as a metaphoric reforestation of downtown Miami. Initiated in 2004, Xavier Cortada’s expansive public mural underneath the underpasses of I-95 explores the evolving dichotomy between the natural and built environments. Mangroves, an essential aspect of much of Cortada’s work, were chosen for their native heritage to the South Florida area. Mangrove forests were the dominant landscape of the state from the time of the first European settlers, subject matter previously portrayed in Cortada’s Florida Mangrove painting from 2003. This allows for the work to be viewed as decidedly site-specific, there being a contextual resonance to the inclusion of mangroves in a project based in Miami.

Fully grown, mangroves serve a multitude of purposes, from providing habitats for a variety of marine and avian life to protecting coastal areas from storm surges. The communal focus of Miami Mangrove Forest is further emphasized through the utility of the mangrove, it being a plant that literally protects and shelters communities of a variety of species. However, throughout the entirety of Miami Mangrove Forest, the depiction of mangroves is that of seedlings instead of fully-grown trees. This was conceptual in intent, the seedlings a representation of the individual citizens of Miami setting their roots in the young city. This allows for a presentation that functions temporally, an implication of a city growing year by year, generation by generation, all while the painted mangroves exist in a state of permanent infancy.

Fifteen years after Miami Mangrove Forest, Cortada led the creation of Pinecrest Mangrove Forest, a mural that depicts the fully-grown mangrove forest the seedlings from the original mural would eventually become. However, Pinecrest Mangrove Forest functions more than just a metaphoric reforestation of the local area, but as a prompt for literal reforestation, a conceptual and practical evolution from its predecessor. This is accomplished through its resonance with Cortada’s Plan(T) project, an ambitious effort to plan for the future through the act of planting mangroves throughout Miami.

The Hibiscus gallery will display the original 2004 drawings Cortada made for the Miami Mangrove Forest this coming season.