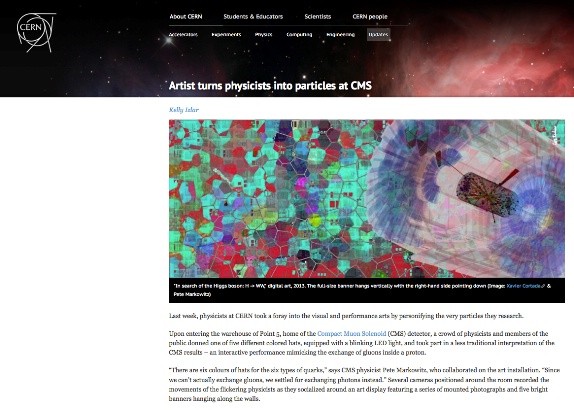 Last week, physicists at CERN took a foray into the visual and performance arts by
personifying the very particles they research.

Upon entering the warehouse of Point 5, home of the Compact Muon Solenoid
(http://home.web.cern.ch/about/experiments/cms) (CMS) detector, a crowd of physicists and
members of the public donned one of five different colored hats, equipped with a blinking LED light, and took part in a less traditional interpretation of the CMS results – an interactive performance mimicking the exchange of gluons inside a proton.

“There are six colours of hats for the six types of quarks,” says CMS physicist Pete
Markowitz, who collaborated on the art installation. “Since we can’t actually exchange
gluons, we settled for exchanging photons instead.” Several cameras positioned around the
room recorded the movements of the flickering physicists as they socialized around an art
display featuring a series of mounted photographs and five bright banners hanging along
the walls.

“This performance is meant to recreate the very work that happens below our feet,” says
artist Xavier Cortada from Florida International University of Architecture
(http://soa.fiu.edu/) in the US. “These scientists devote their lives and passion to this work. I
wanted to literally bring it to life: it’s a celebration.” Cortada was invited by the CMS
collaboration to be the inaugural artist of their Art @ CMS project. While the interactive
performance will be used as a model for future art projects, the five banners will be a
permanent exhibit at Point 5.

Selected pages from every article published by the collaboration makes up the background
of each banner. The foreground interprets the different combination of particles into which
the Higgs was predicted to decay—two photons, two Z bosons, two W bosons, two bottom
quarks and two tau leptons. The banners’ most distinctive feature is the CMS event display
depicting the scattered paths of particles after a collision in the Large Hadron Collider
(http://home.web.cern.ch/about/accelerators/large-hadron-collider) . “Banners, like flags, mark
important events like discoveries of new lands, power and achievement,” says Cortada. “I
wanted to include the emblem of your achievement, which is the event display.”

Although Cortada is only at CERN for a week, he plans to continue learning physics and
creating art to complement, honour and expound upon the work.