When physics, art and sequestration collide in D.C. 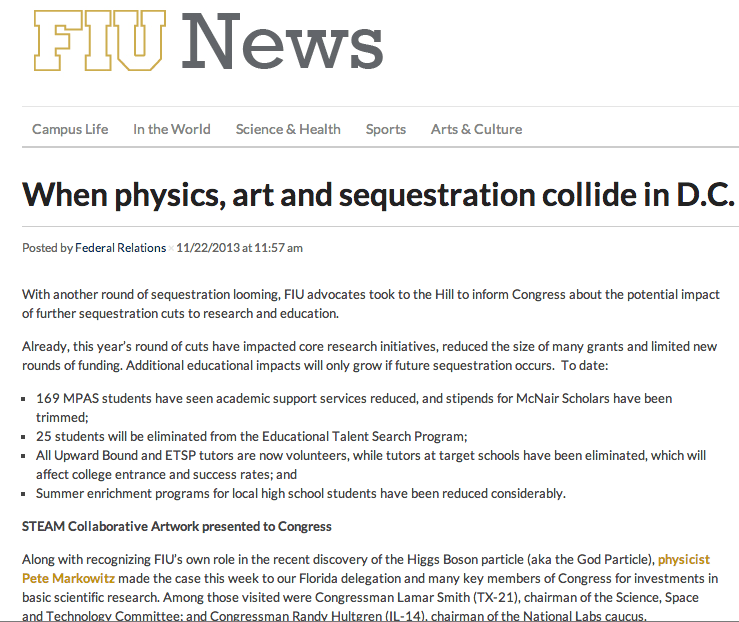 With another round of sequestration looming, FIU advocates took to the Hill to inform Congress about the potential impact of further sequestration cuts to research and education.

Already, this year’s round of cuts have impacted core research initiatives, reduced the size of many grants and limited new rounds of funding. Additional educational impacts will only grow if future sequestration occurs. To date:

Along with recognizing FIU’s own role in the recent discovery of the Higgs Boson particle (aka the God Particle), physicist Pete Markowitz made the case this week to our Florida delegation and many key members of Congress for investments in basic scientific research. Among those visited were Congressman Lamar Smith (TX-21), chairman of the Science, Space and Technology Committee; and Congressman Randy Hultgren (IL-14), chairman of the National Labs caucus. 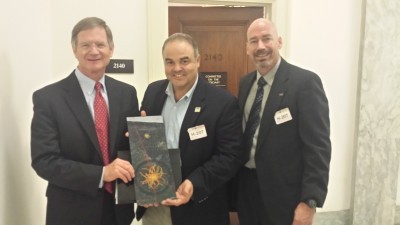 Joining Markowitz were CARTA Dean Brian Schriner and Artist-in-Residence Xavier Cortada. Markowitz and Cortada collaborated to create a series of banners commemorating Higgs Boson that will hang permanently in Geneva at the CERN Large Hadron Collider, where the particle was finally detected. All 535 members of Congress received a replica of the artwork. Congresswoman Suzanne Bonamici (OR-1), chair of the STEAM (Science, Technology, Engineering, Arts and Math) Caucus, was among the members who expressed the greatest excitement in receiving a replica. 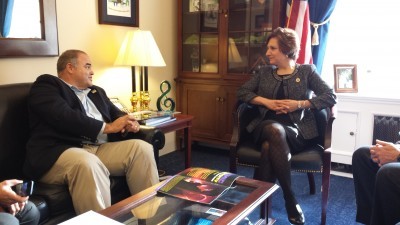 “The collaboration between physicist Dr. Pete Markowitz and Artist-in-Residence Xavier Cortada is an example of the kind of interdisciplinary work fostered at FIU — crossing traditional disciplines, colleges and perceived boundaries,” said Provost and Executive Vice President Douglas Wartzok. “By combining STEM disciplines with the arts to generate STEAM — a solution-oriented approach focused on student learning, innovation and collaboration — FIU demonstrates its commitment to being one of the nation’s leading urban public research universities.”

Also this week, FIU was in the audience when Secretary of State John Kerry addressed the Organization of American States. In his remarks, Kerry reiterated the importance of partnerships with Latin America, which is a priority for FIU’s own academic and research efforts. 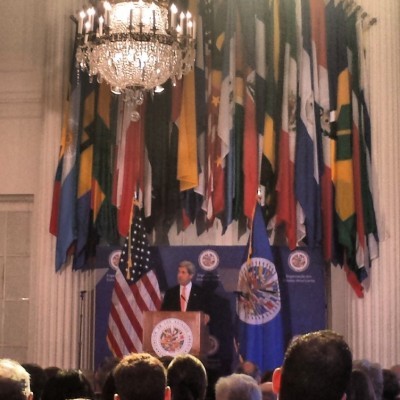 Secretary of State John Kerry spoke on cooperation within our hemisphere before the Organization of American States.

Last but not least, at the Inter-American Development Bank FIU advocates took part in the first DEMAND Solutions Conference, which focused on corporate and academic partnerships centered around innovation, justice reform and the environment. Helping coordinate the event was FIU graduate Alex Maruri.

“It has been an honor to work with our excellent IDB team and partners to bring these great minds together under one roof to explore solutions to development issues through innovation,” said Maruri.