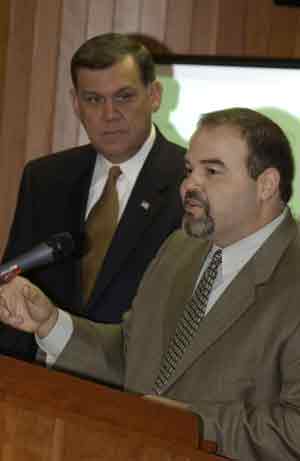 Cortada painted the mural at the White House Conference on Minority Homeownership, held on October 15 in Washington, DC. The painting illustrates the Blueprint for the American Dream Partnership, a collaborative effort of the Bush Administration and members of the housing industry to meet the President’s goal of 5.5 million new minority homeowners by the year 2010. 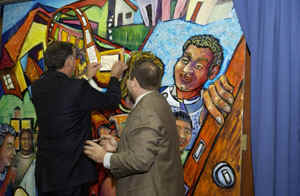 “The Bush Administration is committed to helping people across the country realize the American Dream,” Martinez said at the unveiling ceremony. “We are proud to work with our partners in the private sector to achieve the President’s ambitious goal. This mural is a visual representation of our strong mutual commitment.”

Stepping into the American Dream, 96”x96”, is acrylic and mixed media on canvas. Images in the mural are meant to represent the various avenues through which individuals and families can achieve homeownership – homebuyer education, adequate supply of affordable homes, down payment assistance, and mortgage financing.

The mural features short messages from new homeowners throughout the country, as well as from President Bush, Martinez, and other members of the Blueprint Partnership.

Cortada has exhibited his works in museums, galleries and cultural venues around the world. He has served as Artistic Director of various efforts sponsored by Miami-Dade Art in Public Places, including Master Peace (a school-based art project in Miami-Dade County Public Schools) and PATH (Public Art Transforming Housing). 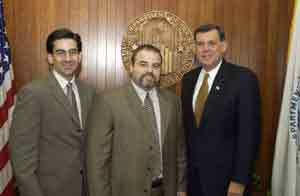 Xavier Cortada with Secreraty Martinez, right, and Chief of Staff Frank Jimenez inside the Secretary’s Office.