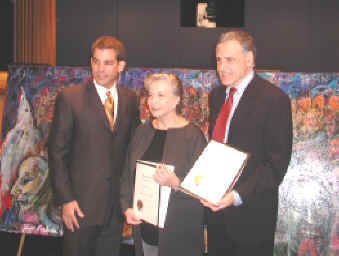 Miami-Dade County Mayor Alex Penelas, the Miami-Dade County Community Relations Board, and the University of Miami School of Law united Jan. 18 to commemorate the 25th anniversary of the original Dade County Human Rights Ordinance. More than two decades ago, then-County Commissioner Ruth Shack sponsored the first ordinance to include sexual orientation protection; what followed with Anita Bryant’s “Save Our Children” campaign and the ordinance’s repeal helped to fuel the modern-day gay rights movement.

The anniversary carries even greater significance this year as Miami-Dade County once again seems destined to decide the fate of sexual orientation protection at the polls. The community leaders who participated in the event, held in the Miami-Dade County Commission chambers, had their eyes on the future as they acknowledged the past.

“One of the truest measures of a community’s quality is how it respects the rights of its people, and that means all of its people,” Penelas said. “We’re here to commemorate the 25th anniversary of the passage of the first Dade County Human Rights Ordinance, and we’re also here to honor the people who helped make that possible and, we’re also here in a bittersweet moment as we regroup and organize our efforts to confront this issue once again, which I’m sure we will do successfully.” 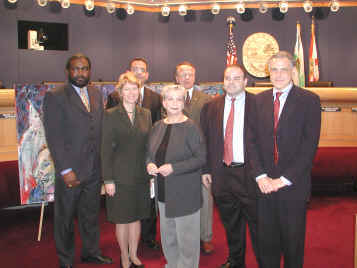 Penelas honored Shack and UM School of Law professor Bruce Winick, who was the legal strategist for the 1977 ordinance, for their contributions on behalf of human rights. Miami-Dade County Commissioners Jimmy Morales and Katy Sorenson and elected officials from Miami Beach, South Miami, Miami Springs, Hialeah, and North Bay Village were also on hand to show their support – many with proclamations from their districts to commemorate the date. Artist Xavier Cortada unveiled a new painting, which incorporates images from the struggle for human rights; the painting will be on exhibit in the Stephen P. Clark Center.

The presentations were followed by an educational forum that put the events of the past 25 years in perspective: Winick and Shack shared stories from the trenches; Florida Atlantic University professor Fred Fejes, who is writing a book on the early HRO days, provided additional historical context; and People for the American Way’s Jorge Mursuli, who led SAVE Dade in the successful effort to pass sexual orientation protection in 1998, offered insight on the current situation.

“If we are in this playing the game of politics, then we are not going to be successful. This is not a game, this is life. This is the real time, this is not a civics lesson. This is our opportunity to pull this off,” Shack said. “I urge you not to think of me as a hero, but just someone who was doing what it was they served public office to do. I thank those who stood side by side with me. I want us to do this not to send messages, but damn it, I want us to win.”