Author, artist among highlights at NACo 2000 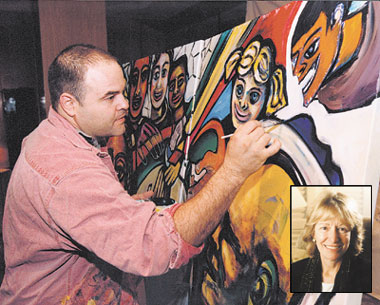 Baseball and presidents: not a bad line-up for Pultizer Prize-winning author and historian Doris Kearns Goodwin, who will keynote the Opening General Session on Sunday, July 16 at NACo 2000, NACo’s 65th annual meeting.

Kearns, who began her career as an anti-Vietnam War White House fellow in the Johnson Administration, went on to make her mark in the publishing world with her best-selling biographies of the Kennedys, the Johnsons and most recently, Eleanor and Franklin Roosevelt. Her book No Ordinary Time: Franklin and Eleanor Roosevelt won the 1995 Pulitzer Prize for History.

As close as Kearns became with some of the subjects of her biographies (Rose Kennedy took great pride in her intelligence, even though as she told Kearns, no one ever thought of her as smart, just as the wife of Joe Kennedy and the mother of “these boys.”), even closer to her heart is baseball, particularly the Brooklyn Dodgers of her youth.

Her memoir Wait Until Next Year chronicles the team’s fate and the memories of her childhood neighbors. She narrated the PBS series of the same name.

Kearns taught history and the American presidency at Harvard for 10 years. She is married to former Kennedy speechwriter Richard Goodwin. On the talk circuit, Kearns is known as a witty, insightful speaker, full of anecdotes about America’s presidents and the political scene.

Make that mural
Bring your crayons, your markers, your paints, your creativity to NACo 2000. You’ll need them … to create “America’s Millennium Canvas: Counties, Corporations and Communities Working Together,” a tribute to the success of America’s public/private partnerships.

Xavier Cortada, an internationally acclaimed artist, will create the mural, which will incorporate written words, pictures or symbols from conference attendees. Cortada will integrate their messages into the nine foot by four foot. painted mural that will be unveiled on Tuesday, July 18, at the General Session and will be displayed in counties throughout the United States. The mural work in progress will take place in the exposition hall.

The Saturday morning program – Conducting a Community Forum – will give county officials tips, models and strategies for improving the effectiveness of these meetings. Typically, “town meetings” can be unproductive at their best and shouting matches at their worst. The workshop presenter, Bill Potapchuk, has facilitated many of these kinds of sessions and he will describe key concepts for ensuring success.

Saturday afternoon brings a repeat of the standing-room-only session from the Legislative Conference – Leading with Influence – Overcoming Resistance to Change.

This program helps county officials understand why people resist change. It provides tools and strategies for dealing directly with people’s attitudes and mind-sets that act as barriers to change.

Todd Lakey, commissioner in Canyon County, Idaho, and participant in March said, “This program provides excellent insight into human nature and how to tap that human potential to accomplish goals and improve our communities.”

Full descriptions of the program are on the NACo Conference Web site or you can call Sandra Clark in the Education Division at 202/942-4277. (See registration form)

As our nation’s local decision makers, county officials need information, resources and tools to help them effectively plan where and how their communities will grow.

A smart growth symposium, to be held in conjunction with the Annual Conference, Friday, July 14, 1–5 p.m. will provide just that.

The four-hour session will provide a comprehensive introduction to the tools and information needed to build county leadership in this area.

This special symposium will be comprised of an opening plenary and individual breakout sessions devoted to the concerns of urban, suburban, and rural communities.

Topics to be discussed include: state smart growth laws and their effect on counties, preserving open space and farmland, working with developers, building community partnerships, transportation and transit-oriented development, and attainable housing.

In this era of rapid population change, accommodating new growth while still preserving the individual characteristics of a community is frequently the most important and politically charged issue facing a local official. You won’t want to miss this!

This display in the exhibit hall will show what counties have done and are doing to celebrate the millennium. To make the display complete NACo needs contributions from counties that have been designated Millennium Communities. The display will contain photos, posters, artwork, proclamations, t-shirts, books, newspaper articles and millennium memorabilia.

Millennium counties should send the best examples of how they are celebrating the millennium to Tom Goodman, NACo Public Affairs Director, 440 First St., NW, Washington, DC 20001. If you have questions, you can contact Goodman at 202/942-4222 or by email attgoodman@naco.org.