Planting mangroves may just save Miami from a climate change apocalypse

Planting mangroves may just save Miami from a climate change apocalypseXavier CortadaOctober 8, 2019March 21, 2022 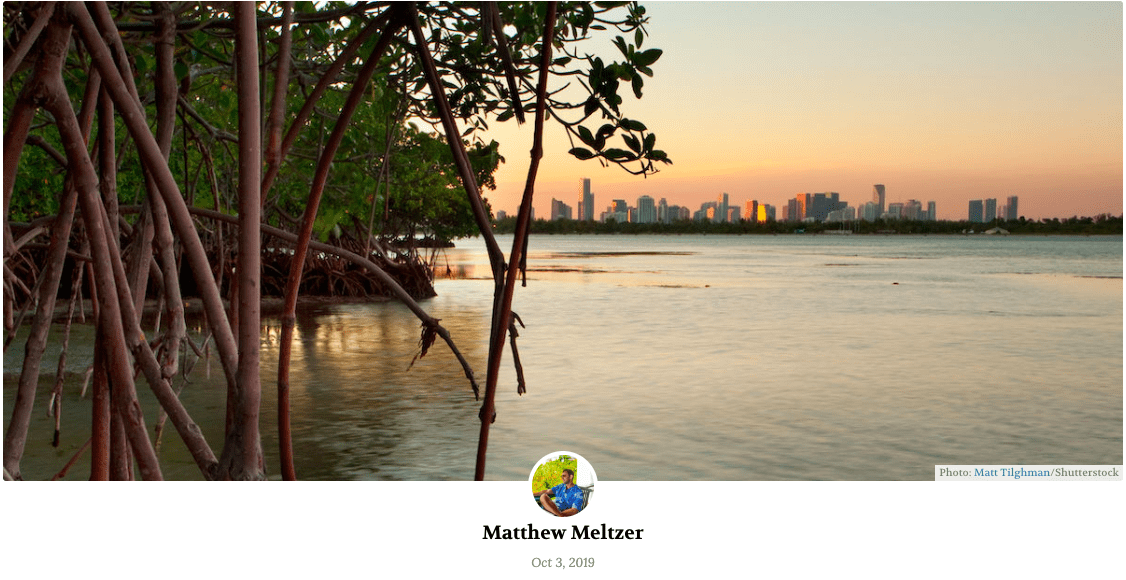 “Everybody thinks about sea level rise on Miami’s eastern shoreline, on the ocean and Biscayne Bay,” the environmental artist and University of Miami professor says from a lush tropical garden in southwest Miami-Dade County. “But long before the sea waves start lapping up on your doorstep, it’s gonna come in underground. And that saltwater intrusion will wreak havoc on our community.”

Miami, and much of Florida, is built atop an underground limestone aquifer. This makes it more susceptible than anywhere to saltwater invasion from below, through the aquifer’s porous surface.

“When sea levels rise, the first place they’ll land is where you and I and all our trees get our drinking water,” he continues. “In time that means we won’t be able to drink that water, and that oak tree out there isn’t going to survive because its roots are drinking saltwater. All our tree canopy, everything you take for granted — your fruit trees, your mangoes, your oak trees, all your agricultural industry — everything you take for granted as nature and being here forever is going to change.”

He goes on to describe scenarios where the saturated ground is no longer able to support septic tanks, and the city’s waste system falls into ruin. That leads to mass property devaluation, skyrocketing flood insurance, and disease caused by waste seeping into the ground.

That’s before he delves into explaining how water on Miami’s western coastline — also known as the Everglades — will rise and effectively drown Miami from three directions.

“Maybe there’ll be some ridge areas that survive as barrier islands,” he says. “But Miami as we know it isn’t going to be here.”

Showing the world how mangroves may be Miami’s best hope 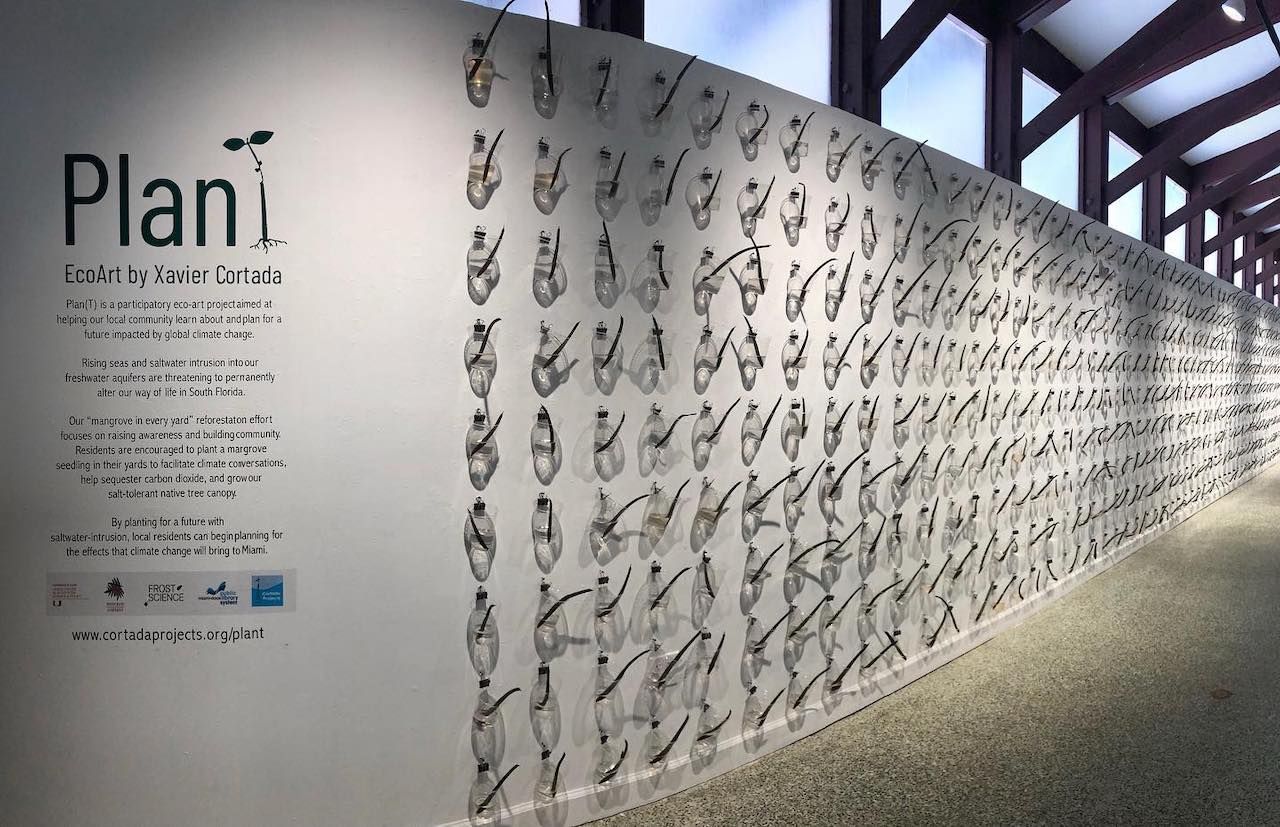 As artists do, however, Cortada tempers his apocalyptic warnings with a bright ray of optimism. His latest project, called Plan(T), is encouraging Miamians to plant mangroves in their front yards, both as a symbolic gesture to talk about climate change and as a literal reforestation of the area.

“I want to remind Floridians that we’re still part of an ecosystem,” he says. “The concrete and glass and neon sometimes lulls us into thinking we’re disconnected from it.”

The project begins at the weekly Pinecrest Gardens Farmers Market, held a few blocks from Pinecrest Gardens where Cortada has his studio. He and an army of volunteers — many of them his university students — hand out mangrove propagules to passersby, encouraging them to plant propagules in their front yards. Included with the propagule is a white flag, which is to be planted next to the growing mangrove emblazoned with the home’s elevation.

The mangroves are symbolic of the vast swamp Florida once was and will likely be again. Because mangroves are saltwater resistant, when the oaks, palms, Banyans, and mango trees Floridians now enjoy all die off from saltwater intrusion, mangroves can live on and provide shade as well as a place for ecosystems to thrive.

The flags tell how nearly all houses in South Florida are subject to sea level rise. Even inland homes may sit only a foot or two above sea level, and be uninhabitable should waters rise from the ocean or the Everglades.

“You have someone over to your house, or your neighbor is out mowing the lawn, he’s going to ask you what that flag’s doing there,” Cortada says. “Then you’re going to tell him everything I just told you, and that’s what these art projects really are: Conversations, and engaging with the community over time.” 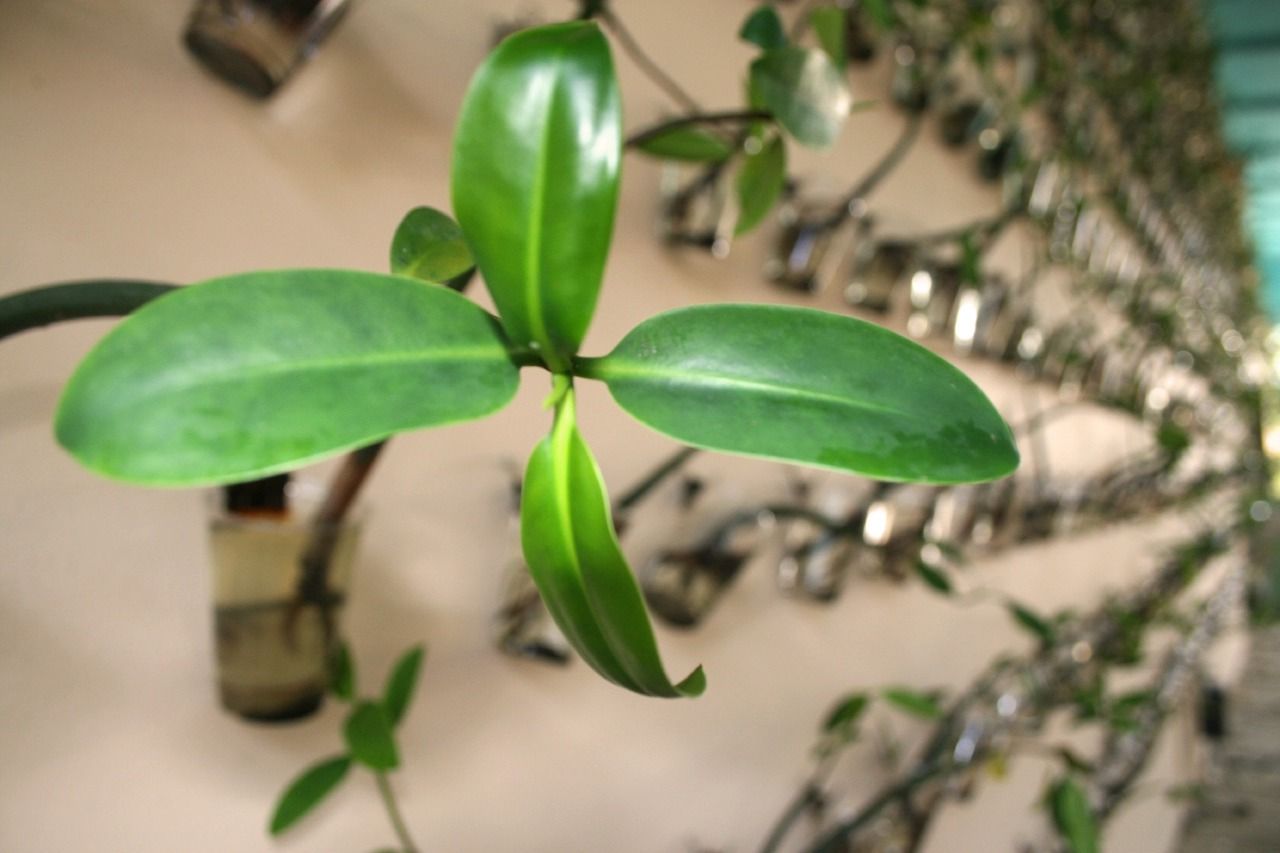 The farmers market, however, is just the beginning of the Plant(T) project. The project’s primary art installation consists of grids of propagules in plastic cups mounted on walls throughout the city, serving as reminders of what Miami will ultimately become. Cortada says he arranges them to look like street grids, and the propagules show the mangrove canopy that will sit over South Florida’s streets in the not-so-distant future.

“What you’re looking at are 820 specimens that are going to be the future tree canopy of Miami-Dade County,” he says proudly as we view his installation in a gallery at Pinecrest Gardens. “And 820 opportunities for conversation and introspection.”

Similar grids can be found in 50 libraries across the county, as well as on campus at the University of Miami and, soon, at some local high schools. In December, the propagules that adorn his main exhibit near his studio will be planted in the Pinecrest Gardens’ parking lot, creating the world’s first urban mangrove forest. In January, the propagules in the libraries and schools will be given to residents to plant in their yards.

This is not Cortada’s first time using mangroves to make a statement. In 2004 he painted a mural on an I-95 underpass near downtown Miami, depicting a mangrove forest that once stood in its place. He later had mangrove propagules hung in store windows and doors along South Beach’s iconic Ocean Drive, which he later planted near Virginia Key to help replenish its supply of barrier vegetation.

“Mangroves are incredible buffers from storm surges,” he says, explaining why planting mangroves en masse may help save the city. “Whenever a hurricane hits a mangrove forest, it weakens the hurricane and then it absorbs the energy of that hurricane and the storm surge. So, they’re really valuable ecological resources for any community.”

In addition to providing barriers from storms and a tree canopy for the future, Cortada says he hopes to give Floridians a visual reminder of climate change, one that ultimately motivates them to try and change an ominous future. And his walls of propagules can serve as both a warning and a sign of hope for the next generation.

“We don’t see it now, but it’s coming,” he says of sea level rise in Florida. “And my project wants to make that a reality for people. Tragic as it should sound to you, even in the face of this I think it’s a hopeful gesture. If anything, it helps educate you and make you aware. So you decide what you’re going to do for yourself, your family or community. It’ll help you decide what you’re going to do at the ballot box. It’s kinda like what Sting said on Russians, I hope Miamians love their children too.”