Gabriela Metellus, a freshman at William H. Turner Technical Arts High School, remembered a day in elementary school when a classmate accidentally stabbed herself with a pencil and then blamed it on her.

“I could not find the language to say that it was not me,” said Metellus, who had recently arrived from her native Haiti and was learning English. That memory stayed with her.

She was telling her moving story to University of Miami School of Architecture students Lucas Rosen and Benjamin Klinger during a meeting of high school students and UM students on March 18, the first day of the School’s 2019 U-Serve, an annual community service event when the School offers its design services to the community.

This year the School of Architecture will partner with the African Heritage Cultural Arts Center and Turner Technical Arts High School to create plaques, flags, and a pop-up market to enhance the courtyard space at the cultural center in Liberty City.

Twenty-seven students from Turner Technical Arts High School worked with 53 first year architecture students to come up with their own designs, based on ancient African icons. Their work will be unveiled on Friday and then seen by the public the next day during the 2019 Sankofa Jazz Festival held at the center’s grounds. 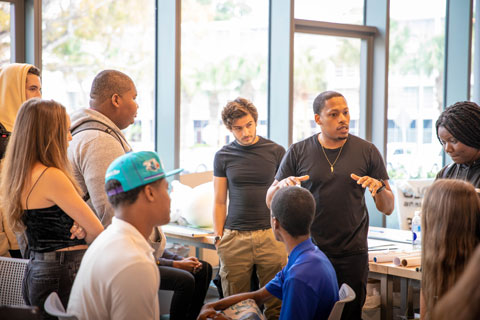 “The goal of this collaboration is to unveil the rich history of Liberty City, a historically disinvested community to the University of Miami community, as well as unveil the similarities and differences of experiences between university students and high school students,” said School of Architecture lecturer Germane Barnes, who along with Xavier Cortada, a local artist and professor of practice at UM, came up with the idea.

The first part of the day at UM—for both the university and high school students—was to learn about the ancient Adinkra symbols, which would be used as a basis to create the plaques. Nana Blackman, visual arts coordinator for the arts center, talked to the students about the significance of the symbols, which are used by certain groups in Ghana to relay concepts and even evoke energy.

“Remember that these cultural symbols are constantly evolving, so as a community changes different elements are added,” Blackman explained to the group gathered at Glasgow Hall.

Later, working in small groups at the spacious Thomas P. Murphy Design Studio Building, the students were tasked with coming up with their own version of an Adinkra symbol, which would also highlight the significance the arts center has in the community. The center has provided arts training for the local residents for decades and has several notable alumni from its classes including Tarell Alvin McCraney, the Oscar-winning screenwriter of the movie Moonlight, said Marshall L. Davis, managing director of the center, who also spoke to the students.

The students were encouraged to use their life experiences and preferences to come up with the symbols they would use in their group’s plaques.

Working on laptop computers, Metellus and her teammates decided upon two symbols. They selected Aya, the symbol of endurance and resourcefulness, which represents traits that Metellus had to learn as she adapted to life in a new country, and Sankofa, a symbol that signifies “go back and get it.”

Their new creation, combining two graphics, will be engraved on one of 27 wooden plaques for the project. Sixty-nine flags will be created by second year architecture students and will also be displayed.

For 15-year-old Johanna Saint-Val, a Turner Technical Arts High School student, the symbol Akoma piqued her fancy. It was a simple heart shape and it spoke of patience and tolerance.

“But it reminds me of my parent’s love and affection toward one another,” she said.

As Cortada watched the students interact with each other, he smiled.

“I hope this project will unearth cultural riches that can be used repeatedly to energize the community as the center holds farmers markets and other events,” he said. “These icons should be permeated throughout the community with pride.”

Cortada also hopes that the high school students, most of whom had never visited a college, would retain a favorable impression of the University and maybe consider applying someday.

“If I were a freshman in high school and could sit with a UM student, I would be thrilled,” he said.