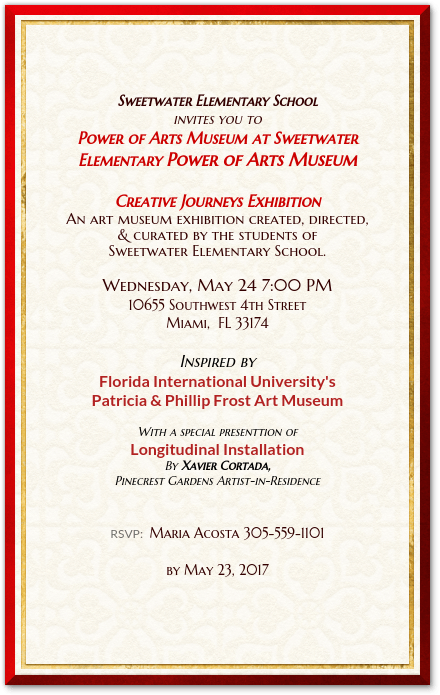 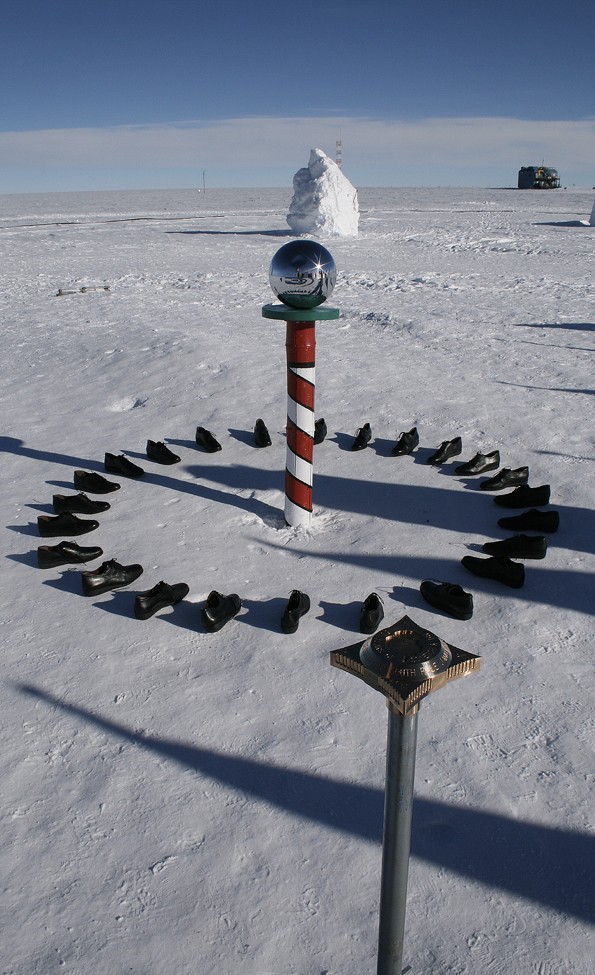 Xavier Cortada, The Longitudinal Installation (at the South Pole), 2007

Participate by following these steps:

1. Find a group of 24 people to perform the Longitudinal Installation ritual with and engage in the performance.
Click here to download instructions.

2. Document the performance with photos and video. 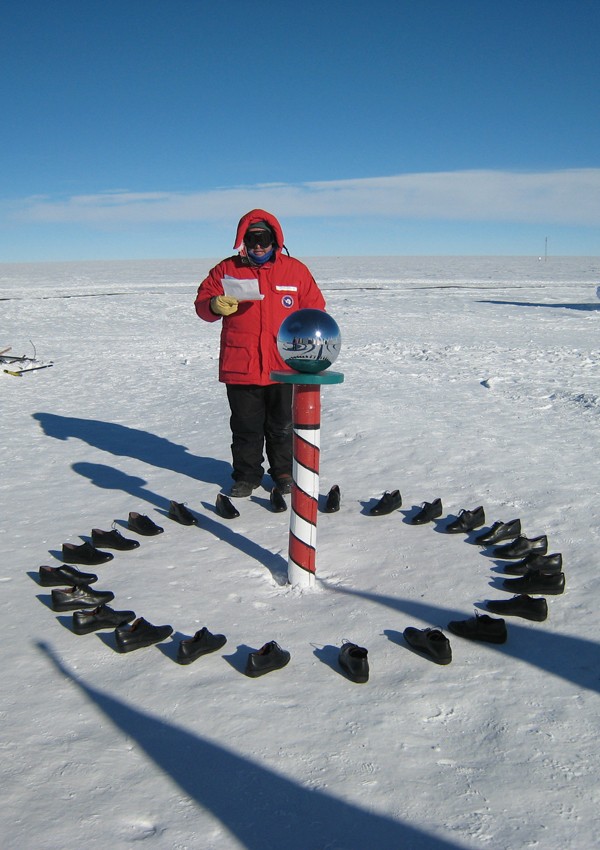 These quotes taken from newspapers across 24 time zones that talking about the impact of climate change on that individual’s life. After Xavier Cortada completed the Longitudinal Installation at the South Pole, he walked to the 0 degree longitude, the prime meridian, and walked clockwise around the pole. He stopped at each shoe to recite each of the following quotes:

0°, Spain:
“There may be a move of wineries into the Pyrenees in the future.”
— Xavier Sort, technical director of Miguel Torres Wineries.

15° E, Switzerland:
“Losses to insurers from environmental events have risen exponentially over the past 30 years, and are expected to rise even more rapidly still.”
— Pamela Heck, Insurance Industry Expert.

30° E, Zimbabwe:
“We used to be able to grow everything we want but that has all changed.”
— Matsapi Nyathi, Grandmother.

90° E, Tibet, China:
“The Sherpas of Khumbu may not know everything, but they are suffering the consequences of the people’s greed. We mountain people should be careful and take precautions. If we don’t save Khumbu today our fresh water will dry up and the problem will be impossible to solve in the future.”
— Ngawang Tenzing Jangpo, the Abbot of Tengboche monastery.

120° E, Philippines:
“The disaster covered almost every corner of this province – rampaging floods, falling trees, damaged houses. It happened very rapidly and many people did not expect this because they haven’t experienced mud flows in those areas before.”
— Fernando Gonzalez, governor of Albay province.

135° E, Japan:
“It’s no exaggeration to say that Japan faces a critical situation when describing the rapid decline of marine supply in its domestic waters that is linked to seaweed loss. Tengusa (seaweed) provides food for marine species.”
— Tomohiro Takase, head of the fisheries department at the Hachijojima municipality.

150° E, Great Barrier Reef, Australia:
“In 20 years’ time, bleaching is highly likely to be annual and that will cause shallow-water corals to be in decline. We need to start working out how we can help people who rely on it for their income. It’s really quite a stunning fact.”
— Ove Hoegh-Guldberg, director of the Centre for Marine Studies at the University of Queensland.

165° W , Niue: “Yesterday morning we woke up to a scene of so much devastation, it was just unbelievable. Cyclone Heta was just so fast, furious and ruthless.”
— Cecelia Talagi, Government Secretary.

150° W, Alaska, USA:
“We are at a crossroads. . . Is it practical to stand and fight our Mother Ocean? Or do we surrender and move?”
— Shishmaref Mayor Edith Vorderstrasse.

135° W, Yukon, Canada:
“The weather is really unpredictable and the ice freezes much later and breaks up earlier. There are more incidents of hunters falling through the ice.”
— Kik Shappa, Hunter, Griese Fiord, Canada.

120° W Nunavut, Canada:
“Our cultural heritage is at stake here. We are an adaptable people. We have over the millennium been able to adapt to incredible circumstances. But I think adaptability has its limits. If the ice is not forming, how else does one adapt to seasons that are not as they used to be when the whole environment is changing underneath our feet, literally?”
— Sheila Watt-Cloutier, president of the circumpolar conference.

75° W, Peru:
“I tell my wife the day that mountain loses its snow, we will have to move out of the valley.”
— Jose Ignacio Lambarri, farmer, Urubamba Valley.

60° W, Argentina:
“The flooding has forced us to redesign routes. We thought it would be for a short period of time, but it has been almost six years.”
— Carlos Avellaneda, manager of a trucking company.

45° W, Brazil:
“I am very frightened. One thing goes wrong, and the entire system follows.”
— Jair Souto, Mayor of Manaquiri.

30° W, Greenland:
“They tell us that we must not eat mattak [whale blubber], but this is all we know. Eating Inughuit food makes us who we are, and anyway we have nothing else to eat!”
— Tekummeq, Town of Qaanaaq.

15° W, Maurtitania:
“We are only eating one meal a day. When there is not enough food, it is the young and the old that get fed first.”
— Fatimitu Mint Eletou, Bouchamo.