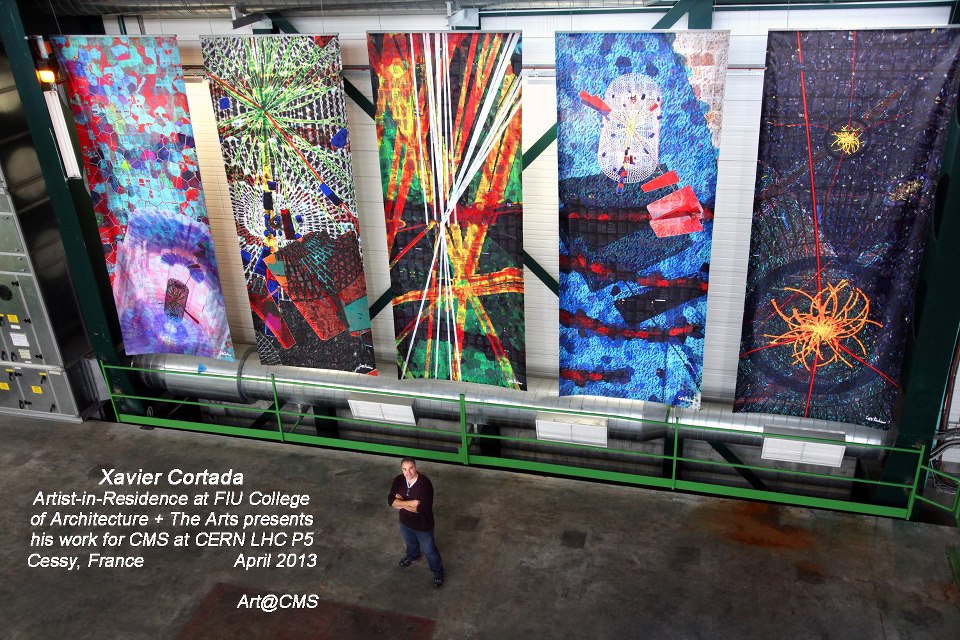 On April 23, FIU physicist Pete Markowitz and Cortada will discuss their collaboration in creating the five banners that marked the discovery of the Higgs boson at CERN in 2013.  Back then, Cortada served as artist in residence at the FIU College of Architecture and the Arts, and Dr. Markowitz represented the University in the CERN collaboration. This talk will discuss interprofessional and cross-disciplinary collaborations.

Xavier Cortada and Pete Markowitz were already talking about how to elucidate the impact of the science at CERN, when Cortada was invited to visit the experiment in August 2012. He was then invited to create a site-specific installation at the experiment location.

The scope of the CMS experiment is vast. The sheer size of the detector, the immense weight, the incredibly detailed engineering, the number of channels of information are unprecedented. The experiment transcends both time and space, with the planning, reviews, commissioning, data taking and now the upgrades going on to allow us to find the truths of nature. The ability at the end of the day to see beyond ourselves and the collaboration’s reach not only across time but across the globe, with thousands of scientists working in a unified, coherent mechanism evokes hope in mankind.

In their discussions, Markowitz and Cortada began thinking about the classical studies of the 1950s, showing that a proton could not be fundamental due to its finite size. In other words, if a photon hits one side of the proton and that scattering deforms the initial side of the proton, the opposite side does not even know until some later time governed by the speed of light and the proton’s size. This series of experiments led to the idea of quarks inside the proton, such as as those studied in the LHC experiments.

In their conversations, they then continued thinking about how observations such as this could become the basis of an art piece for the building above the CMS experiment — maybe with two stained glass panels (one showing the deformation and the other not). The progression led to developing a performance piece involving the CMS scientists:

Their performance, to be performed at a vernissage during the April 2013 CMS collaboration meeting, will transform the building above the underground CMS experiment into one of the protons colliding directly below in the LHC accelerator. In the piece, they invite scientists to participate by wearing a cap with LED lights, showing one of the 6 colors which represent the flavors of the quarks. The physicists themselves then take the role of the quarks inside a proton with the building serving as the confining (proton) walls. Through their social interactions each scientist will mimic the natural interactions studied in the experiment below.

Working together, Cortada and Markowitz developed a permanent art installation to be unveiled at the vernissage. The installation’s five banners give the different strategies to sift through the voluminous collisions recorded by the CMS experiment in the search for the Higgs-like particle. The foreground of each five-meter long banner shows an event which is a possible candidate for each of these different decays of the Higgs-like particle to a final state: two photons, two Z, two W, two bottom quarks or two tau leptons. The backgrounds reflect the additional breadth of the physics program. Each depicts selected pages from every article published by the collaboration. In a very real sense, the banners serve as an homage to the CMS collaboration’s more than 4000 scientists and engineers whose work is diseminated through those very publications. At the same time the complexity of the work illustrates the challenge in paring down the myriad of interactions to select those scatterings which might have produced a Higgs boson.

The resulting exhibit is about honoring the people who have increased our understanding of the universe — those scientists, engineers, technicians and others from around the entire planet whose work and names are showcased in these banners. The connections between their work downstairs and the people themselves is brought out in both the banners and the performance. In the performance piece, the physicists become their work. In each banner, their work becomes art.

The art banners (created by digitally manipulating models, publications, logos and charts produced by the CMS collaboration) evokes the CMS experiment’s dual legacy: inspiring a future generation of scientists by building upon the work of those who came before.