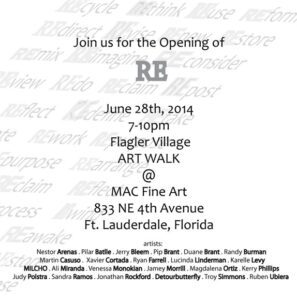 R3 (Reduce, reuse, recycle) is sometimes called the waste hierarchy, the three components of environmentally responsible consumer behavior.
In the spirit of alchemy, I would like to add to that many more visual RE concepts to exemplify a broader perception of how artists interpret this idea.
After reading Robert Sapolsky’s statement* on the wisdom of the crowd, I was inspired to gather a group of artists whose algorithms consist of reusing, recycling, reforming, etc., materials, ideas, imagery, to create something new or to point us in a new direction.
To post examples, Nestor Arenas REthinks the traditional landscape, Julie Friel an ordinary sketchbook; Jamey Morrill, Pilar Batlle and Lucinda Linderman REuse materials creating sculptural pieces with an ecological message; Dan Walker, Jerry Bleem, Jonathan Rockford, Detourbutterfly, Ryan Farrell, Duane Brant REpurpose other people’s ‘garbage’; Ali Miranda REforms a photograph of Obama; Judy Polstra REwinds time with REclaimed watches; Venessa Monokian and Pip Brant REwork books to create new concepts; MILCHO REarranges an action verb to make you REthink its meaning while Karelle Levy and Martin Casuso do the same with their knitted materials. In another realm, Troy Simmons makes us REflect on the impact we are having on our planet; Randy Burman, Sandra Ramos and Xavier Cortada REview profound concepts of our contemporary society with traditional REused materials. Rosa Naday G. uses REcurrent themes and imagery in her work which include visual expressions of identity, migration, alienation, history, war, and beliefs. Galt Mikesell REunites objects that were separated at transit, along Miami area rail tracks. Ruben Ubiera, Magda Ortiz and Kerry Phillips REclaim use of ordinary supplies with loaded connotation to REgain their worth. These artists, like ants, are working together to sway the general public to REdefine R3.

*-“…a colony of ants makes fantastic sense. Specialized jobs, efficient means of exploiting new food sources, complex underground nests with temperature regulated within a few degrees. And critically, there’s no blueprint or central source of command—each individual ants has algorithms for their behaviors. But this is not wisdom of the crowd, where a bunch of reasonably informed individuals outperform a single expert. The ants aren’t reasonably informed about the big picture. Instead, the behavior algorithms of each ant consist of a few simple rules for interacting with the local environment and local ants. And out of this emerges a highly efficient colony.”