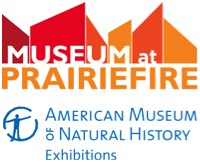 Xavier Cortada (with the participation of physicist Pete Markowitz), “In search of the Higgs boson,” digital art, 2013

On September 13, world-renowned artist Xavier Cortada will open an exhibition of his famed banners, which depict the five experiments used to make the Nobel prize-winning discovery of the Higgs boson particle. Cortada’s exhibition will open at the Museum at Prairiefire’s Sprint Gallery at 10 a.m. September 13 and remain on display through the end of year.

Nicknamed “the God particle,” the Higgs boson imbues all other particles with mass. Its discovery in mid-2012, half a century after it was first hypothesized, culminated the work of 182 universities and institutes in 42 countries and helped confirm the Standard Model of Physics. Identifying the Higgs required the most complex machine ever built, the Large Hadron Collider (LHC).

Cortada’s five original banners, created digitally, are permanently installed at CERN, the world’s largest particle physics research center, in Geneva, Switzerland. They hang below ground, directly above the LHC where the Higgs boson particle was found. The prints that will be on display at the Museum at Prairiefire help connect visitors to the place and time of the particle’s discovery.

Working with Cortada, the Museum at Prairiefire is adding scientific content to the banner exhibition and developing an exhibit that will travel to public venues in other cities. The exhibition represents the Museum’s recent foray into creating its own content. Development of other traveling exhibitions are in the works, as well.

“Science is my muse,” Cortada said. “The detection of the Higgs boson was intricate and multilayered, and so are the artworks I created. Stained glass references the LHC as a modern-day cathedral that helps us understand the universe and shape our new worldview. The oil painting technique honors those who came before us, the repetition of motifs across the five works celebrates internationalism and rendering the work as ‘banners’ marks this as a monumental event.

“Most importantly, the background for the banners honors the scientific collaboration. It is composed of words from the pages of 383 joint publications and the names of more than 4,000 scientists, engineers and technicians. With this piece, I wanted to create art from the very words, charts, graphs and ideas of this coalition of thinkers. It is my hope these banners will inspire future generations of physicists to continue to move humanity forward.”

XAVIER CORTADA
Xavier Cortada’s science art practice is oriented toward social engagement and the environment. At CERN, Cortada worked with a physicist to develop a site-specific art installation capturing the five search strategies used to discover the Higgs boson particle. The five giant banners hang at the location (more than 300 feet below ground) where the particle was discovered.

Cortada often collaborates with scientists in his art-making, and has worked with groups globally to produce numerous joint art projects, including environmental installations at the North Pole and South Pole, peace murals in Cyprus and Northern Ireland, child welfare murals in Bolivia and Panama, AIDS murals in Switzerland and South Africa and eco-art projects in Taiwan and Holland.

Cortada has created art for the White House, the World Bank, the Museum of Florida History, the Florida Botanical Gardens, Miami City Hall, the Frost Art Museum, Miami-Dade County Hall, the Miami Science Museum, Port Everglades and the Florida Turnpike. A Miamian, he is artist-in-residence at Pinecrest Gardens, south Florida’s cultural arts park. He holds a bachelor’s degree from the University of Miami College of Arts and Sciences, a master’s degree from the Miami Business School and a law degree from the University of Miami School of Law.

The Museum at Prairiefire, located in Overland Park, Kansas, is committed to innovative learning in science, the arts and natural history. Through a founding collaboration with the American Museum of Natural History in New York City, as well as with other U.S. cultural and educational institutions, the Museum at Prairiefire provides access to all to understand and celebrate natural history, the arts and science in our region and around the world. The Museum engages visitors and students of all ages with world-class exhibitions, important programming, and significant educational and STEAM opportunities. The Museum is open from 10 a.m. to 5 p.m. Mondays through Saturdays and from noon to 5 p.m. Sundays. For additional information, the public may call (913) 333-3500 or visit the Museum’s website at visitthemap.org.