On December 3rd, 2016, HANDS ON MIAMI volunteers will join Xavier Cortada in meeting the City of Miami “KaBOOM-iPlay Play Everywhere Challenge by painting “Mangrove Hop” directly on street asphalt.  Using paintbrushes, 60 volunteers will transform a street that dead-ends into I-95 and Coral Way into a creative playground featuring interwoven mangrove roots.  Children will use the art to imagine and develop interactive games.

Cortada chose to depict mangroves as part of the Play Everywhere Challenge to commemorate the tenth anniversary of the Reclamation Project, a participatory eco-art project Cortada developed in 2006 to engage hundreds of volunteers in reforesting the Biscayne Bay and inspire thousands to imagine what our community looked like before all the concrete was poured..

Hands on Miami has worked with Cortada in the past.  Indeed in 2004, volunteers painted the Miami Mangrove Forest, metaphorically reforesting the I-95 underpasses in downtown Miami, Little Havana and Allapattah neighborhoods.  The public art was the precursor to The Reclamation Project.  A decade later, the Hands on Miami volunteers are painting roots as a nod to those who set their roots in Miami and help build community.  Here is a quote from his artist statement from 2004:

“The mangrove roots symbolize the residents who have set roots in their neighborhood and built community,” said Cortada. “[B]y reaching out to others, we build a stronger community, much like the walking feet of mangrove roots do to build formidable structures and nurture new life.” 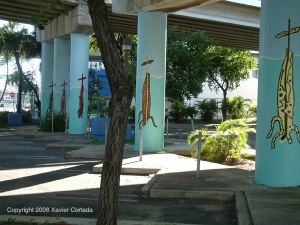 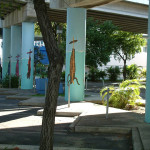 Xavier Cortada’s 2004 Miami Mangrove Forest was an important effort because it not only transformed a very public space with paint (in pre-Wynwood Walls Miami), but the public art was the precursor for The Reclamation Project, an eco-art project that engaged hundreds of volunteers in reforesting the Biscayne Bay and inspired thousands to imagine what our community looked like before all the concrete was poured.  More than painting walls than painting on concrete walls, the eco-art  served as the basis for all of the work our local science museum does to engage local residents in habitat restoration and environmental stewardship. 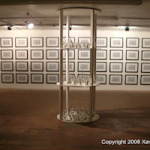 In 2004, Miami artist Xavier Cortada worked with Hands on Miami volunteers to metaphorically reforest the I-95 underpasses in downtown Miami, Little Havana and Allapattah neighborhoods.  Cortada’s pencil drawings of mangrove seedlings were used by volunteers to paint dozens of columns beneath I-95 and create the Miami Mangrove Forest.

The drawings were initially exhibited at Miami Art Fairs: OMNIART I in December 2004.  The originals drawings are on loan to Florida International University and are currently on display in University’s Executive Offices on the 5th floor of the Primera Casa building. 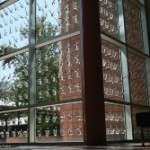 The Reclamation Project is a participatory eco-art project launched by Miami artist Xavier Cortada in 2006.  It explores our ability to coexist with the natural world.  Since 2007, the coastal reforestation component of the Reclamation Project has been based at the Miami Science Museum, where an installation of 1,100 mangrove seedlings is on permanent exhibit.Annually, volunteers collect mangrove propagules in coastal areas. The propagules are then exhibited in clear, water-filled cups (see: Gallery of Installations) where they are nurtured into seedlings and eventually planted along coastal areas.  This coastal reforestation creates new habitats above and below the water line.