Just Below the Surface: 1915 (The Founding of Miami Beach) 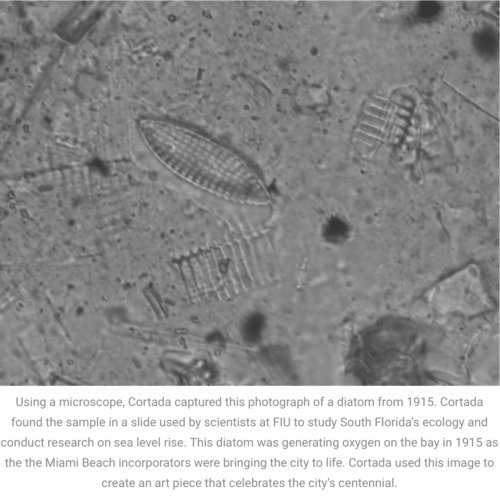 Working with FIU scientist Evelyn Gaiser, FIU College of Architecture + The Arts artist-in-residence Xavier Cortada captured images of diatoms (glass-encased algae) that lived in the bay 100 years ago to create this digital artwork to commemorate the City of Miami Beach centennial.  On February 18th, 2015, Cortada participated in a panel discussion at Frost Art Museum along with FIU scientist Evelyn Gaiser to discuss the innovative ideas behind the science and art and their implications for the way we move forward. 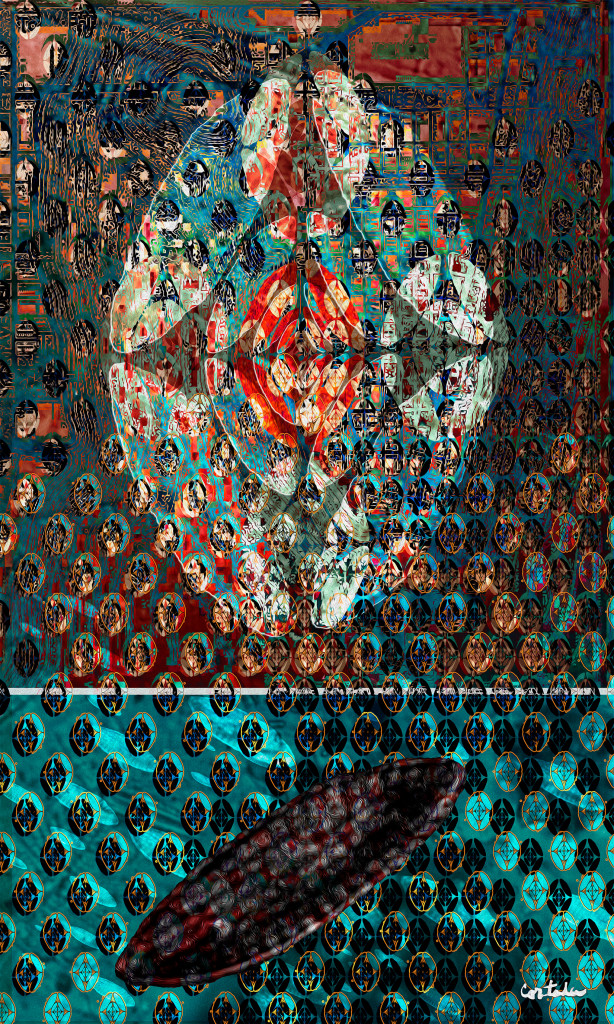 Xavier Cortada, Just Below the Surface: 1915 (The Founding of Miami Beach), 60″ x 36″ archival ink on aluminum, 2015.  Gift of FIU College of Architecture + The Arts and FIU School of the Environment, Arts and Society to the city to commemorate its centennial on March 26th, 2015.

I created this art piece, “Just below the surface: 1915 (The Founding of Miami Beach)”  using one of the microscopic diatoms that Dr. Gaiser studies in her FIU lab to address sea level rise.  Diatoms are single-celled organisms that live in the water and harness the power of the sun to convert CO2 into oxygen.  This particular diatom (that I photographed from a slide) was living on Biscayne Bay back in 1915.  It was creating the very air that the Miami Beach founders breathed 100 years ago as the city was being brought to life.
Its glass shell, all that remains from the diatom, is used by scientists today to see what was as they research environmental issues crucial to the city in the century to come.  Scientists—and artists—can determine the past salinity of water by examining the shells of diatoms preserved in sedimentary core samples. Each diatom species has a different salinity preference, so changes in the mixture of fresh and sea water (driven by sea level and changes in water management) can be inferred from past diatom remains.
In the art, there is a a large diatom just below the surface.  It is wrapped in red –almost to look like a hemoglobin molecule that transports the oxygen in our blood. The diatom and the whole web of life it supports above and below the waterline is our lifeline.

Above the horizon, I’ve arranged images of this diatom into a circle to symbolize the Miami Beach sun rising above the water and shining its light on the the city.  Through time, season after season (represented by the sun divided in four parts), the city grows, new life.  I’ve layered the sun over a historic city map. All around the diatoms are floating into the air– making the actual air.
Making life.
The ecosystem.  The beauty of the natural world.  The water.  The sunny four seasons.  This is what attracted our first pioneers to the beach. And every generation that came and stayed. It is what convened the people to build community.
The environment is what gives life to the city.
It is what we need to protect the most in its next 100 years.
— Xavier Cortada