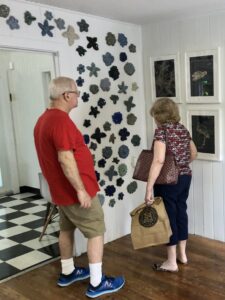 The “Flower Force” exhibition is located within Cortada’s studio and is open to the public every Sunday between 9am – 2pm through the month of January 2020. Proceeds from the purchase of the ceramic flower pieces help support Cortada Projects.

Flower Force is multi-faceted in operation, an almost natural evolution from Cortada’s previous Flor500 that pushes the elasticity of art to the point of recognizable social practice. The project revolves around Florida native wildflowers and Cortada’s insistence on mobilizing individuals around the state to plant these flowers around their local communities. Similar to the Flower Force project, a wildflower has multitudes of significance to its respective community, such as being aesthetically beautiful, containing medicinal properties, as well as being a vital part of its own ecosystem, allowing for pollinators to continue the process necessary to sustain life.

The original rendition of Flower Force was designed as a participatory eco-art project, however its current evolution expands on this by utilizing the traditional medium of sculpture, specifically ceramics, as a conceptual icon throughout the project’s dispersal. The ceramic flower, as it is dispersed throughout Florida similar to the wildflower seedlings, becomes an appropriation of the original wildflower. This appropriation works as both a conceptual representation of the ideals of Flower Force, as well as a literal one; the ceramic flower represents both the physical attributes of the wildflower as well as the temporal attributes. The permanence of a ceramic flower coincides to the impermanence of the actual wildflower.

Much like a flower goes through a process of dispersal in order to reproduce, the ceramic offerings Cortada present act as a dissemination from the original public art installation for which they were intended. This is not only a literal action, but one of conceptual significance, it is the dissemination of the ideals and values that the original installation represents. In this way, Flower Force behaves quite similarly to Cortada’s Flor500 participatory art project, as the end result is the dispersal and cultivation of native flowers throughout Florida as a reclamation of the built environment for nature. This imbues the ceramic flowers with the conceptual significance and weight of the ideals that Cortada presents, the ceramic flowers both conceptually and literally representing the wildflowers that have been planted.

Audience participation in an effort to make an actual change in the environment is nothing new to Cortada’s work, as seen through both Flower Force and Flor500 respectively, as well as projects such as Plan(t), the Reclamation Project, and Underwater HOA. All these projects require direct involvement from the community to succeed, the goal of all being to prompt specific action against climate change rather than just raise awareness. This socially-engaged art is fundamental to Cortada’s concentration, transforming his role as an artist into an effective community leader.