“Art and the Environment:

The Eco-Art Work of Xavier Cortada”

awareness about issues like global climate change, deforestation and the plight of

endangered species. In 2007, the artist used the moving ice sheet beneath the South

nature. He has worked with scientists, arborists and environmental managers to

develop eco-art projects that engage community residents in bioremediation. One of

individuals and organizations to adopt an endangered or threatened animal, paint an

Biscayne National Park, and commit to an “eco-action” that directly or indirectly

mitigates the plight of this animal. Cortada has been commissioned to create art for

Museum of Florida History, the South Pole Station, and the Frost Art Museum. 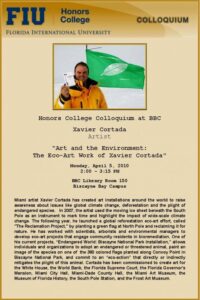