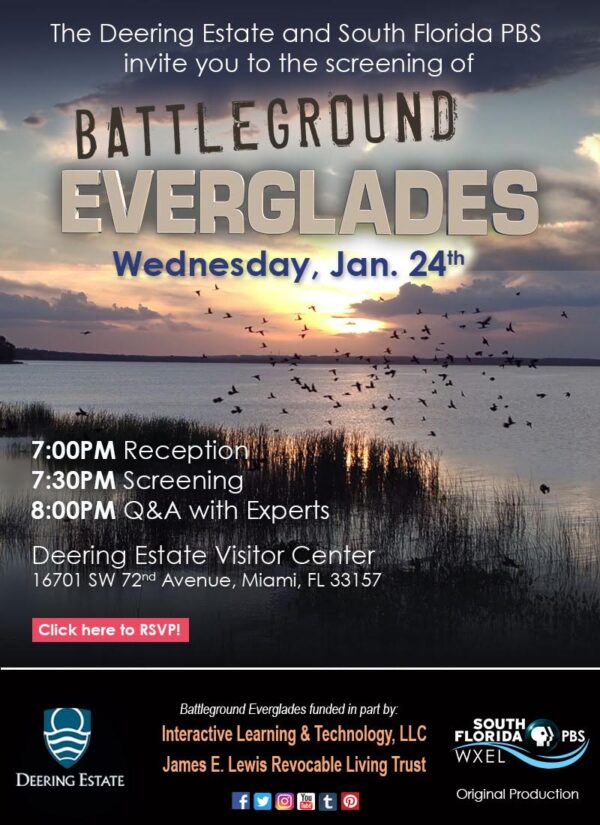 Please join us for the special screening of “Dangerous Seas” on Wednesday, January 24th at 7PM at the Deering Estate in Miami.  The episode of DANGEROUS SEAS showcases Florida artist Xavier Cortada using his own creativity to inspire environmental restoration.

This event is open to the public and is RSVP only.  Click here: https://www.eventbrite.com/e/premiere-battleground-everglades-at-the-deering-estate-tickets-41877591002?aff=efbeventtix  (EVENT CLOSED/Sold out)

As part of the Speaking Sustainably Film Series, South Florida PBS (WPBT2 – WXEL) and the Deering Estate invite you to a complimentary reception and screening of the Battleground Everglades, Dangerous Seas, on January 24th at 7pm at the Deering Estate Visitor Center Theatre. Reception begins at 7pm with light snacks and beverages. The screening will begin at 7:30pm. Following the screening guests can participate in a Q&A with featured experts and the production crew. Event is free and open to the public.

BATTLEGROUND EVERGLADES explores the struggle to save one of the world’s most revered wetlands: Florida’s Everglades. Devastated by a century of drainage and development, the entire Everglades watershed is suffering from man-made pollution, habitat destruction and species decline.

Hosted by Charles Kropke, author and well-known Everglades expert, the 6-part series showcases dramatic challenges and innovative solutions to restore this World Heritage Site. As more and more countries battle sea level rise, invasive species, algae outbreaks and other environmental issues, the Everglades is poised to become a beacon of learning and hope.

South Florida is at the epicenter of a world-wide threat from sea level rise. DANGEROUS SEAS examines how Florida’s porous Biscayne aquifer, the source of South Florida’s drinking water, is endangered by rising oceans and other contaminates.

The series will begin airing on both South Florida PBS stations in February 2018, See below airdate schedule!