Dedication of the “Incorporation Palm” at Miami’s birthplace

On Tuesday, July 28th, 2009 at 1:00 PM, four Miamians will come together at the Incorporation Palm site to become the city’s first “reincorporators.”
They will hear historian Paul George describe how the City of Miami was incorporated at that very location 113 years earlier.
Then, Miami artist Xavier Cortada will give them four flags to plant near the base of the Royal Palm tree, each flag depicting a different number of the city’s incorporation year: 1, 8, 9, 6.

Each will then touch the palm tree with the palm of their hand and recommit themselves to growing the City of Miami. 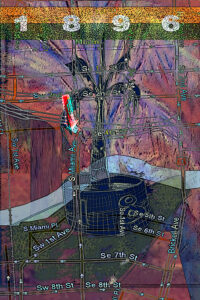 The Art
On Earth Day 2008, Miami artist Xavier Cortada had a Royal Palm Tree planted at the very location (see map below) where, in 1896, three hundred and sixty eight men incorporated the city of Miami, elected its first leaders, and selected the Royal Palm as the symbol at the center of the city seal.
In conceptualizing an art piece that marks the birthplace of the city, Miami artist Xavier Cortada thought to bring the seal to life.  He designed “incorporation Palm” as a living monument that honors not only those who brought the city to life, but those who work today to keep it growing.
In the work, four flags each printed with one number (1, 8, 9 and 6 –the year of the City’s incorporation), will be aligned counter-clockwise along four equidistant points on a circle around the palm tree.  The numbers will be placed in the following direction:

According to historian Dr. Paul George, the city’s incorporation site –a stop in his historic tours of downtown Miami– is now a median at the base of the north side of the South Miami Avenue bridge in Downtown Miami.

Cortada’s conceptual piece references the past (1896) as a way of charting a course to a brighter future (the growing Royal Palm), the promise made by every generation that labors here.  During Miami’s 109th birthday celebration, the Mayor and City Commissioners unveiled two murals at the entrance of City Hall.  Cortada stated that he created these two murals because he wanted “to educate residents about their City’s history and its multicultural origins. By learning about our past we can build a future filled with mutual respect and understanding.”

The Incorporation Palm, a living monument, aims to do the same.

The work invites residents to dedicate themselves to bettering the city and in so doing become “Reincorporators.”  Reincorporators will be able to post their Incorporation Palm photo, talk about their commitment to the city, and exchange ideas on how to better Miami.