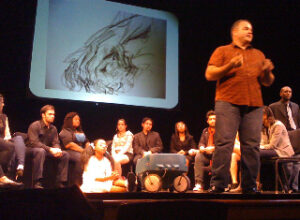 On January 11, 2011, Miami artist Xavier Cortada will travel to Washington, D.C. to collaborate with the FIU Theatre Department in its presentation of Body & Sold at the Kennedy Center.  This performance presents a staged reading of Body & Sold by playwright Deborah Fortson, on the topic of human trafficking, featuring student actors from Florida International University in Miami and McKinley Tech High School in Washington, DC. (see below).

Earlier in the day, Cortada will listen to testimony during a congressional hearing on Human Trafficking in the Capitol.  The testimony will serve as an inspiration for a collaborative mural Cortada is developing addressing the issue.  In the evening, Cortada will work with the Body & Sold student performers to implement “Rope” a participatory performance/presentation at the Kennedy Center during/after their performance of Body & Sold.

The mural will be unveiled in London in July 2011.

The integrated cast, made up of nine FIU theater majors, one theater alumnus and six students from McKinley High School will perform on Jan. 11, 2011 at the Kennedy Center in Washington, D.C.

“The day is of particular significance because it has been recognized as national human trafficking day,” said Phillip Church, an associate professor of theater at FIU and director of the play. “This play has resonated with audiences in several cities and uniquely addresses the little talked about issue of human trafficking.”

Body & Sold is a play based on transcripts extracted from interviews conducted by playwright Deborah Fortson in which ten young victims of human trafficking from Southeast Asia share their experiences and journeys of loss of innocence and redemption.

The FIU theater majors auditioned for the project at the beginning of year for the production.

The 2009 U.N. Global Report on Trafficking in Persons shows that, on the plus side, the number of countries implementing the international agreement that addresses trafficking in persons has doubled. Of the 155 countries that were surveyed, over 60 percent had enacted laws following a special U.N. protocol to fight human trafficking adopted in 2003.

On the other hand, many governments still resist enforcement, and nearly half of all nations have yet to bring a single perpetrator of the scourge to justice.

The U.N. study reports that only one victim out of every 100 trafficking cases is rescued. While the most common manifestation of trafficking is sexual exploitation (accounting for 80 percent of the phenomenon), other activities such as forced labor in mines, factories, sweatshops or domestic servitude, as well as child soldiers, are less frequently detected.

More information can be found on the Body & Sold awareness campaign at http://www.bodyandsold.org/. Tickets available at the Kennedy Center Box Office, charge by phone at (202)-467-4600 and at www.kennedy-center.org.