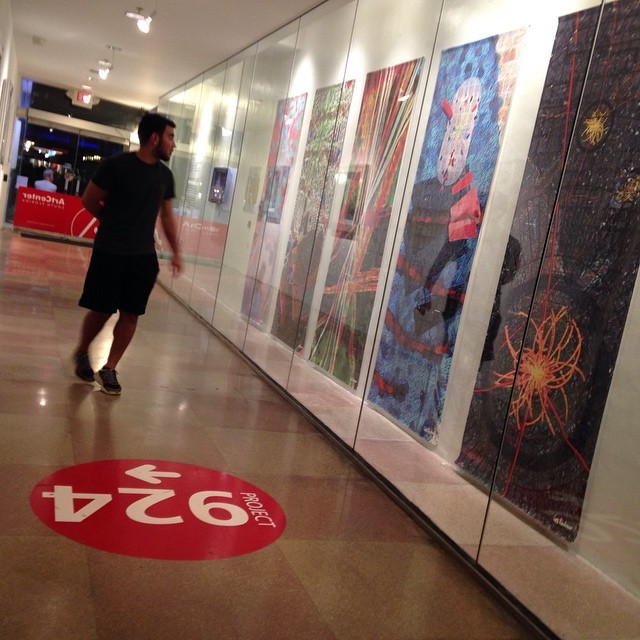 Cortada’s five banners and TED talk (https://cortada.com/2013/cern/statement) are presented in the vitrine at the entrance of the 924 building.

Cortada will be showing replicas of the five giant banners that hang at the Compact Muon Solenoid (CMS) experiment facility where The Higgs Boson was discovered, 100 m below ground.  The works capture the five search strategies scientists used to find the particle and help confirm the Standard Model of Physics.

Xavier Cortada (with the participation of physicist Pete Markowitz), “In search of the Higgs boson: H -> gamma gamma,” digital art, 2013.

Art@CMS
For this Art@CMS exhibition, works were selected from artist/scientist collaborations as well as video artists who were invited to create pieces inspired by the Compact Muon Solenoid (CMS) experiment. The CMS experiment at the Large Hadron Collider (LHC) is the world’s largest and most powerful particle accelerator, at CERN, the European Laboratory for Particle Physics that sits astride the Franco-Swiss border near Geneva. CERN is one of the world’s largest and most respected centers for scientific research. It operates the largest particle physics laboratory in the world where physicists and engineers are probing the fundamental structure of the universe. They use the most complex scientific instruments to study the basic constituents of matter—the fundamental particles—that provide insights into the fundamental laws of nature. CMS is designed to measure the properties of previously discovered particles with unprecedented precision, and be on the lookout for completely new, unpredicted phenomena.