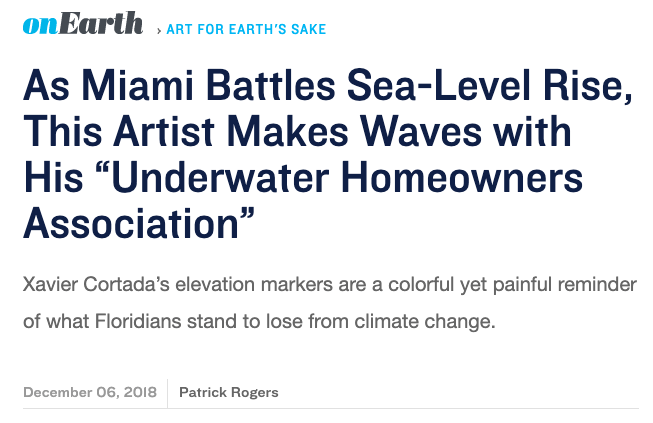 Miami artist Xavier Cortada lives in a house that stands at six feet above sea level. The Episcopal church down the road is 11 feet above the waterline, and the home of his neighbor, a dentist, has an elevation of 13 feet. If what climate scientists predict about rising sea levels comes true, the Atlantic Ocean could rise two to three feet by the time Cortada pays off his 30-year mortgage. As the polar ice caps melt, the sea is inching ever closer to the land he hopes one day to pass on to the next generation, in the city he has called home since the age of three.

“It is with incredible pain that I say I know my city is doomed by climate change,” says Cortada, who is the artist in residence at Pinecrest Gardens, a recreation center a few blocks from his home in South Miami. “But as a Miamian, my job is to do everything I can to help us through this chaos.”

That explains the big sign in Cortada’s front yard. In watery blues and greens, it displays the property’s elevation with a bold number 6. It’s also why the artist has invited other residents of this upscale district to join his wryly named Underwater Homeowners Association project. Across the community, elevation markers designed by Cortada are now standing in front of his neighbors’ homes and businesses—a colorful, albeit painful, reminder of what’s at stake.

“The underwater markers are basically me trying to let people know that Antarctica is coming to town,” says Cortada, who has traveled to both the southernmost continent and the North Pole to witness the rapidly melting glaciers that are contributing to the rise of ocean levels around the globe. In a converted laboratory in Antarctica and on the pitching deck of a Russian icebreaker in the Arctic Ocean, he created more than 100 paintings out of glacial meltwater mixed with paint and sediment from Antarctic mountain ranges.

Cortada wants to use the elevation markers to get neighbors talking about the changing climate and its effects on their lives and homes by mapping the destruction and chaos in advance. “The residents of Florida are at ground zero when it comes to sea-level rise,” he says. “Unfortunately, our politics and mind-set don’t reflect that we need to do some serious problem solving. I wanted to create a way of helping us understand that, by making the invisible visible and just a little bit strange.”

The Underwater HOA project launches this month during Art Basel Miami Beach, an annual festival that draws art lovers from all over the world. Miami is already feeling the consequences of sea-level rise in the form of widespread flooding during storm surges and seasonal king tides.

“The reason I know we can do something about this is that we’ve done it before,” he says. “Everybody from Miami could tell you their hurricane stories, when neighbors come together like they never have before. That sense of community and purpose when there’s a problem in front of us—it’s something we know how to do. With sea-level rise, it’s an existential problem.”

As part of the artist’s multifaceted project, high school students have painted huge versions of Cortada’s elevation markers on the pavement of intersections along Pinecrest’s main thoroughfare. At Pinecrest Gardens, the artist will also be exhibiting a selection of 60 his “Antarctic Ice Paintings” that have never been seen before. He made these haunting abstract compositions with ice samples from the Ross Sea and fragments of earth gathered by climate scientists nearby in the McMurdo Dry Valleys.

The combination of community activism and striking artistry is typical of Cortada, says Barbara Matilsky, curator of art at the Whatcom Museum in Bellingham, Washington, who has included his work in two exhibitions. “The ‘Antarctic Ice Paintings’ are a beautiful idea—they physically embody the continent, so that we have a remnant of Antarctica in the museum—but they are also very beautiful visualizations” to look at, she says.

Matilsky also admires how Cortada’s projects have raised awareness and galvanized action on climate issues. For his Reclamation Project, launched in 2008, he persuaded merchants in Miami Beach’s trendy Lincoln Road district to care for mangrove seedlings grown in planters outside their shops. After being on public display for a month and a half, the mangroves were transplanted by volunteers along the shore of Biscayne Bay, where they act as natural barriers against storm surge. The project was such a success that it was adopted as an ongoing program by Miami’s Frost Museum of Science. So far, eight acres of mangrove swamp have been created.

The artist hopes he’ll reach even more people with Underwater HOA but says he isn’t concerned with the actual numbers. “At the end of the day,” he says, “I’m just trying to get this conversation beyond a whisper.”

Xavier Cortada’s Underwater HOA is on display in the Village of Pinecrest in Miami-Dade County from December 2–9. “Antarctic Ice Paintings” will be shown at the Hibiscus Gallery of Pinecrest Gardens through January 13, 2019.