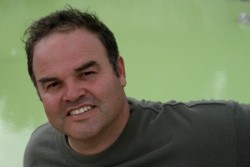 In using arts and culture to build community, we often forget that the greatest resource isn’t necessarily the program we design, or the object we create, or the idea we generate. It is the people themselves. We somehow forget that art is theirs; that for a very long time now people have intuitively used it to better connect with one another.

Sixty-thousand years ago, our deep ancestors in Africa began a slow-motion journey that populated that continent and the rest of our planet. Responding to nature, they hunted and gathered as they made their way. Along their migration through the land, some took to growing their own food and settled. Others continued on their path until they found a place to call home.

At each stop, they worked communally to build their society. They developed language and customs. They passed these on through rituals and stories. We see this in the artifacts archeology reveals to us today. They developed their culture in the context of their land. Grounded by nature, they built community.

Somewhere along the way, we’ve lost that sense of place, that connection to each other and the natural world. I use my art to try to help find our way.

In 2006, I developed the Reclamation Project — an eco-art intervention that invited my fellow South Floridians to engage in protecting their coastal ecosystem.

I led them in walks through mangrove forests where they gathered mangrove seedlings. Experiencing, they learned how important those habitats were for sustaining our marine life (including fisheries) and to prevent coastal erosion.

I then led them on walks along Miami Beach’s busy retail areas, where they asked storeowners to grow the mangrove seedlings on their windows.

The volunteers hung the seedlings as installations inside clear, water-filled cups, juxtaposing the artificial and the organic. They arranged the cups in the form of a modernist grid, referencing the city grid that displaced the mangrove forest and the ecosystem. 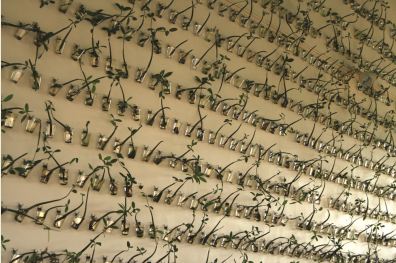 An example of the mangrove project in South Florida.

The installations attracted passersby who would ask the store clerk what they were. Informed by the volunteer, the clerk would explain that they were looking at seedlings that used to exist naturally on that very location before all the concrete was poured.

Once the seedlings germinated, I led the volunteers on walks along Biscayne Bay where the seedlings were planted and grow new ecosystems above and below the waterline.

Art engaged volunteers who not only reforested mangroves, but asked storeowners to educate strangers about the importance of preserving ecosystems. They were connecting with each other and the natural world. Together, they were building community.

A few days ago, I received an email from Sam Bower at greenmuseum.org. He informed me that, inspired by my Reclamation Project, a group of volunteers created an installation of clear cups on a grid on the windows of the Happiness Institute in San Francisco. Mangroves don’t grow there, but people with a will to make a better community do.

They wanted to “start vegetables from seed. One thing led to the other, people brought seeds from their garden and we did a test project (about 50 cups) in the window. [T]hey have little soil cups inside biodegradable plastic cups with little drainage holes in them that drain one into the other. We’ve suffered a few suction cup errors and have decided to upgrade to a larger size. The seeds have just started to sprout!”

By planting seeds in cups they reclaimed an urban space to grow a vertical vegetable garden. Their hope was to inspire people to use the same technique at home to grow food.

Like our deep ancestors, they were using art intuitively to create a sense of place, to exchange ideas, to build community. To connect with one another and the natural world.