Each shared brief presentations about their respective work across art, science and technology, and discussed the perceived boundaries, entanglements, and kinships of these fields. Together they considered the contributions artists can make in collaborations with the sciences, and whether novel ethical frameworks can evolve from meaning-making across disciplines. 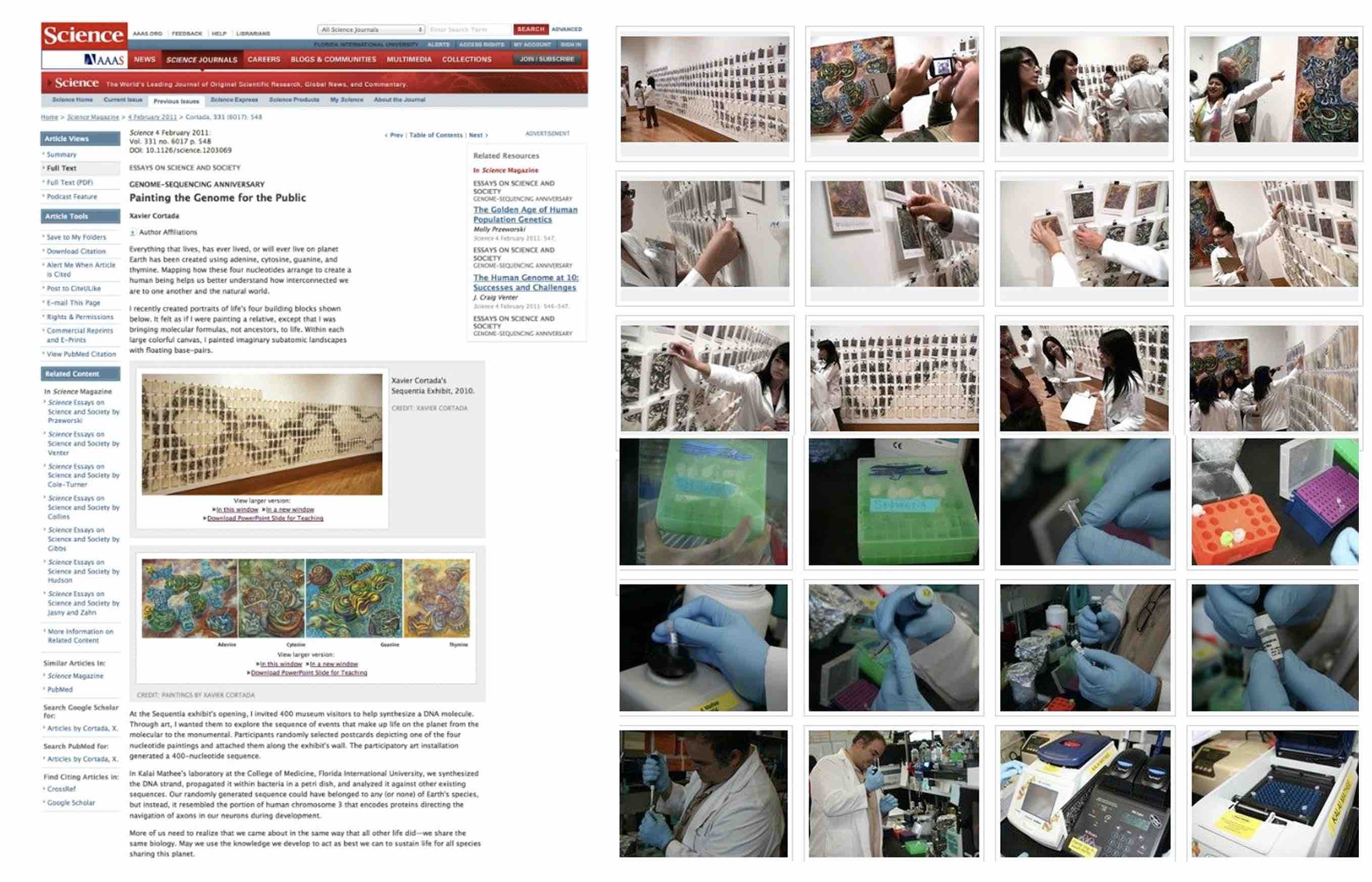 Frost Art Museum: In 2010, Cortada worked with Dr. Kalai Mathee, a molecular biologist, to synthesize an actual DNA strand made from a sequence generated by museum visitors using Cortada’s art. The randomly generated sequence resembled the portion of human chromosome 3 that encodes proteins directing the navigation of axons in our neurons during development. 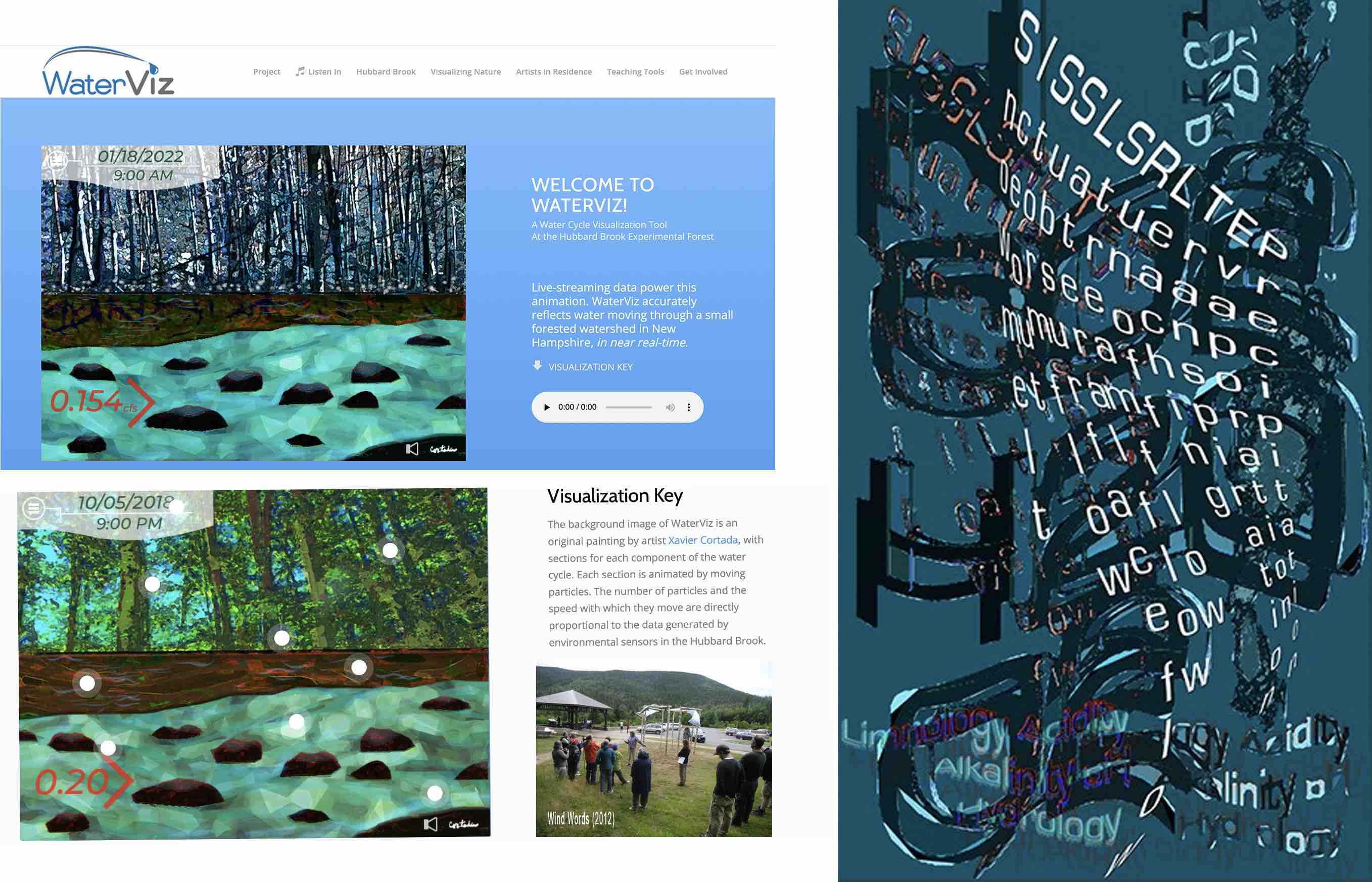 Hubbard Brook: In 2012, Cortada began working with scientist Lindsey Rustead and her team at the Hubbard Brook Experimental Forest in New Hampshire to develop WaterViz: Hydrologic data is transmitted to the internet and used to drive a computer model that calculates all components of the water cycle for the catchment in real time. These data, in turn, drive artistic visualizations and sonifications of the water cycle, reflecting the hydrologic processes occurring at that moment in time. 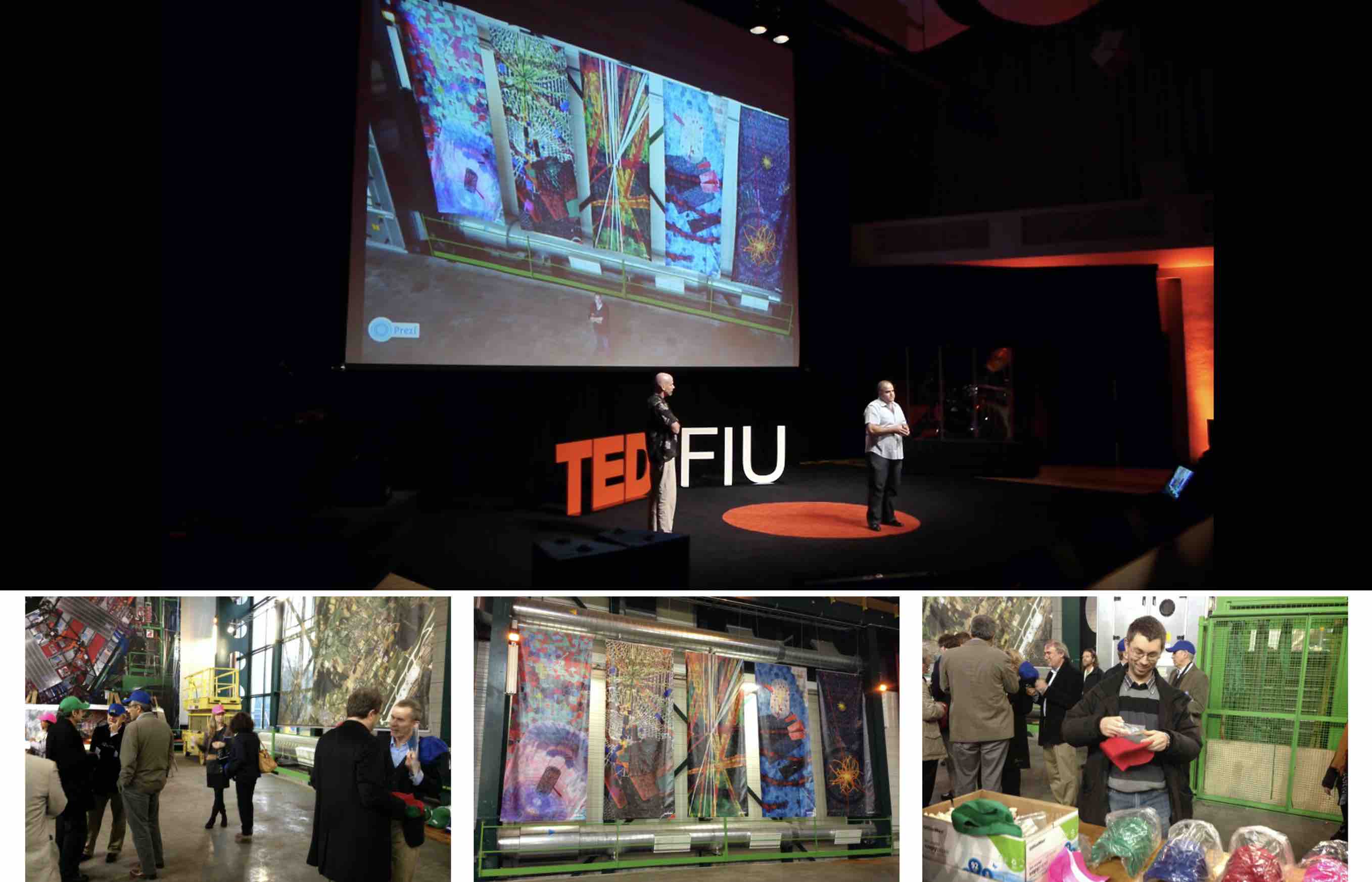 CERN: In 2013, Cortada worked with physicist Pete Markowitz to create a permanent site-specific installation capturing the five search strategies scientists use to discover the Higgs Boson and prove the Standard Model of Physics. He also engaged 300 scientists from around the world in a performance art piece that conceptually transformed them into the very subatomic particles they research.

Xavier Cortada
Xavier Cortada makes work that generates awareness and action towards issues of global climate change, sea level rise, and biodiversity loss. Using art’s elasticity to engage others, Cortada educates and inspires community members to work and learn together to solve the community’s problems. Over the past three decades, the Cuban-American artist has created art at the North and South poles and across 6 continents, including more than 150 public artworks, installations, collaborative murals and socially engaged projects. He has been commissioned to create art for CERN, the White House, and the World Bank, among many other art, science, history, and government venues. Cortada was recently awarded the Environmental Law Institute’s National Wetlands Award for his Reclamation Project (2006-present), a long-lived community activation ecological art intervention that, together with its spinoffs, has engaged scores of Floridians, youths to adults, in learning about and addressing the widespread disappearance of Florida’s native vegetation. The Miami artist serves as professor of practice at the University of Miami Department of Art and Art History, with secondary appointments in the School of Law and the Miller School of Medicine.

Mónica Bello
Mónica Bello is a Spanish curator and art historian. Over the last 18 years, her work has focused on the crossovers between disciplines. In her curatorial projects she discusses the way artists detect and instigate conversations around emergent cultural phenomena, and the role of science and technology in the perception of reality. Since 2015 she holds the position of Curator and Head of Arts at CERN at the European Organization for Nuclear Research in Geneva. At CERN she leads and designs the art programmes, and she curates the artistic residencies, the art commissions and the exhibitions. In 2018 she was guest curator of the prestigious Audemars Piguet Art Commission, presented in Art Basel. Prior to her arrival to Switzerland she held the position of Artistic Director of VIDA (2010-2015) at Fundación Telefónica, Madrid, a pioneering award that fostered cross-cultural expressions around the notion of life. She initiated and ran (2007-2010) the Department of Education at Laboral Centro de Arte, Gijón (Spain). She curated exhibitions, events and publications internationally supporting creators and researchers from different fields and backgrounds. As an internationally recognised figure within art and science networks, Bello is a regular speaker at conferences and participates in selection committees, advisory boards and mentorship programs. In 2022 she will curate the Icelandic Pavilion in support of the artist Sigurður Guðjónsson for the Venice Biennale.

Erika Blumenfeld
Erika Blumenfeld is a 2000 Creative Capital Awardee and a transdisciplinary artist whose research-based practice investigates the places where our phenomenological world meets the human experiences of wonder and meaning. Since 1998, Blumenfeld has approached her work like an ecological archivist, tracing and collecting the evidence and stories of connection across the cosmos. Her studio has included laboratories, observatories, and extreme environments, including notable collaborations with NASA, Scripps Institution of Oceanography, McDonald Observatory, and the South African National Antarctic Program. She is a Guggenheim Fellow, Smithsonian Artist Research Fellow, Creative Capital Awardee, and the recipient of an artist-in-residence from Island Press, the Rauschenberg Foundation, and Cape Farewell in the UK. She has exhibited widely in the U.S. and abroad, including the Albright Knox Art Gallery; Fondation EDF; Färgfabriken Norr; Kunstnernes Hus; TATE Modern among others. Her work is featured in Art and Ecology Now (Thames & Hudson), Klima Kunst Kultur (Steidl), Arte da Antarctica (Goethe Institut), and The Polaroid Book (Taschen) and resides in many permanent collections including Albright-Knox Art Gallery; Lannan Foundation; Houston MFA; New Mexico MFA. She lives and works in Houston, Texas.