Vote to keep our heads above water. South Florida is on front lines of sea-level rise.

Vote to keep our heads above water. South Florida is on front lines of sea-level rise.Xavier CortadaOctober 29, 2020January 11, 2021

Home » 2020 » Underwater Vote » Vote to keep our heads above water. South Florida is on front lines of sea-level rise. 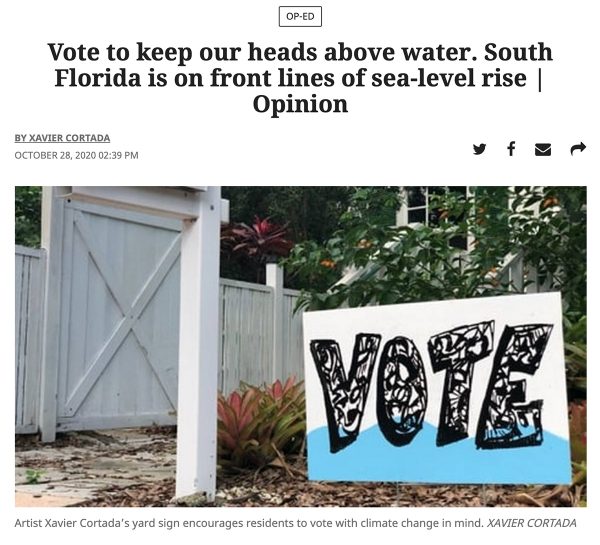 BY XAVIER CORTADA (MIAMI HERALD OP-ED, OCT. 28, 2020) – In less than one week, we, the people of the United States of America, are going to make a decision that will critically impact how we will spend the rest of our days on this planet, how future generations will live on this planet and how many more pandemics we will bring to it.

Politicians focus on the here and now. On Election Day, let’s remind them that our lives continue beyond their terms of office. Unless they change our current course of action, skyrocketing carbon emissions will continue to heat the planet, melt polar caps and bring catastrophe to a peninsula defined by water: increased sea-level rise, more coastal flooding, saltwater intrusion into our freshwater aquifer, prolonged and record-breaking heat waves, extreme weather, including stronger, stalled and wetter hurricanes, ecosystem collapse, more pandemics and, eventually, a weakening of the Gulf Stream.

Ancient ice-core samples show that for the last 800,000 years, carbon dioxide (CO2) concentrations in the atmosphere have fluctuated between 200 parts and 300 parts per million (ppm). Temperature increases and decreases over time perfectly track these shifts. Scientists have found that it normally takes tens of thousands of years to make those 100 ppm shifts. In the past century alone, because of our addiction to fossil fuels, we have not only added 100 ppm to our atmosphere, but we also have pushed CO2 levels from 300 ppm to over 400 ppm. This hasn’t happened in more than 800,000 years.

As of last month, our planet’s atmospheric CO2 concentration is at 415 ppm — unprecedented in human history. This year has been Miami’s warmest year on record. Unless we do something about it, in the next 30 years alone, at least 100 days out of every year will feel like at least 100 degrees, according to a study by the Union of Concerned Scientists. At this pace, the future will bring unimaginable suffering to our species.

Globally, warming of this magnitude undoubtedly will have huge implications on food security, economic growth and human health — this without mentioning the adverse consequences to come because of melting glaciers globally, vanishing Arctic permafrost, shrinking polar sea ice and collapsing Antarctic ice sheets. Global climate change will not just melt the poles, it will affect and irrevocably transform every point in between.

According to the National Oceanic and Atmospheric Administration, depending on how seriously we address our collective greenhouse-gas emissions, sea levels are projected to rise between 3 feet and 7 feet by the end of this century. Unlike a hurricane’s coastal storm surge, this water will come and it will not recede. Rising seas will simultaneously arrive at every American coastline, wreaking havoc and destruction. FEMA and insurance companies will not be able to absorb the monumental costs. Homeowners and communities will be left alone to endure the losses.

Before rising seas lap at our doorstep, water will rise from beneath our feet: Saltwater intrusion will poison our freshwater aquifer and threaten not just our drinking water but also our landscape and agricultural industry. It will raise the water table, causing septic tanks to fail. The threat of ever-rising seas will increase flood-insurance premiums, eventually persuade banks not to loan 30-year mortgages, pop Miami’s real-estate bubble and cause our property values to collapse.

Human impacts on the climate warm the oceans, fueling hurricanes that are stronger (Maria), wetter (Harvey) and more likely to stall (Dorian). This spells real trouble for Miami. Not only do these new kinds of hurricanes threaten us, with rising seas they also make us extremely vulnerable. With an additional 3 feet of sea-level rise, if we were to get hit by another Hurricane Andrew, the storm surge would crest over our coastal ridge and inundate the western part of our county, all the way to the Everglades.

Let’s all become Underwater Voters, talk to each other and make sure we elect leaders who will equitably address our climate emergency: We need to elect a president who will bring us back to the Paris Agreement, divest from fossil fuels, and invest in clean energy. We need to elect a Miami-Dade County Mayor who, through her actions, has already proven that she is more than ready and willing to equitably tackle a future impacted by rising seas.