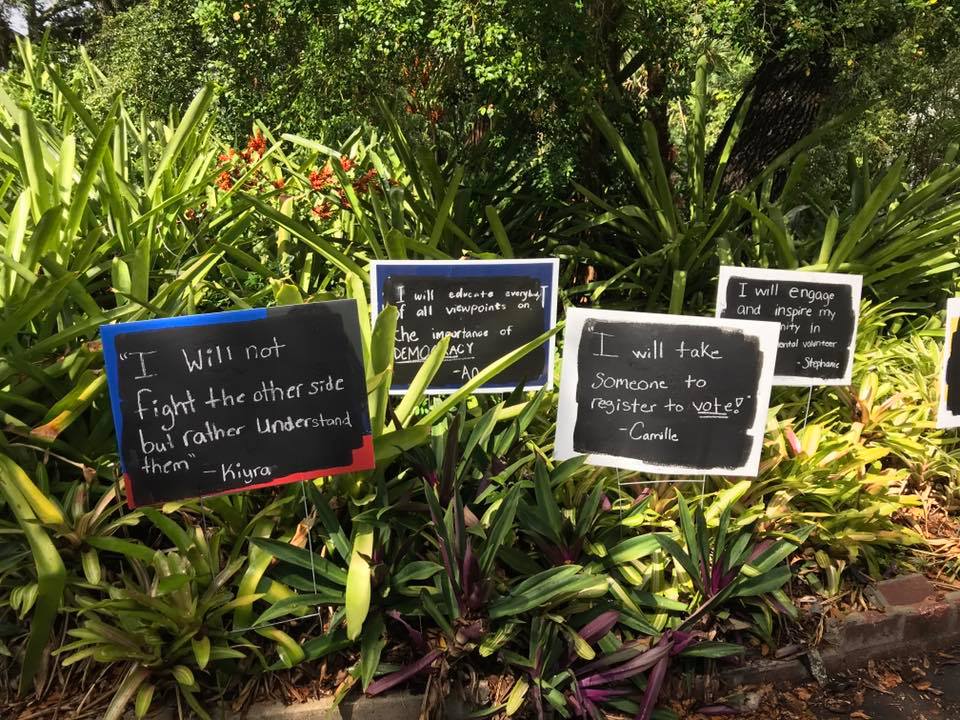 Democracy (is an action verb)

After the election on November 6th, 2018, Cortada encouraged neighbors to take the partisan political yard signs from their front lawns and paint them with paint that converts the surface into a chalkboard. “Transform those old political signs into messages announcing their personal action steps to build a more perfect Union. Using chalk, write what you commit to doing – now that the election is behind you– to continue to activate our democracy.”

Five days later, on Sunday, November 11th,  from 10am to noon (during the Pinecrest Gardens Farmer’s Market), Cortada invited community members to bring their converted political yard signs with them to his Pinecrest Gardens studio.

There were blank chalkboard signs in the studio for participants to activate with the help of FIU Honors College students.

“Our contribution to this democracy doesn’t end on election day. The democratic process continues day after day in our words and deeds through the entire year.” 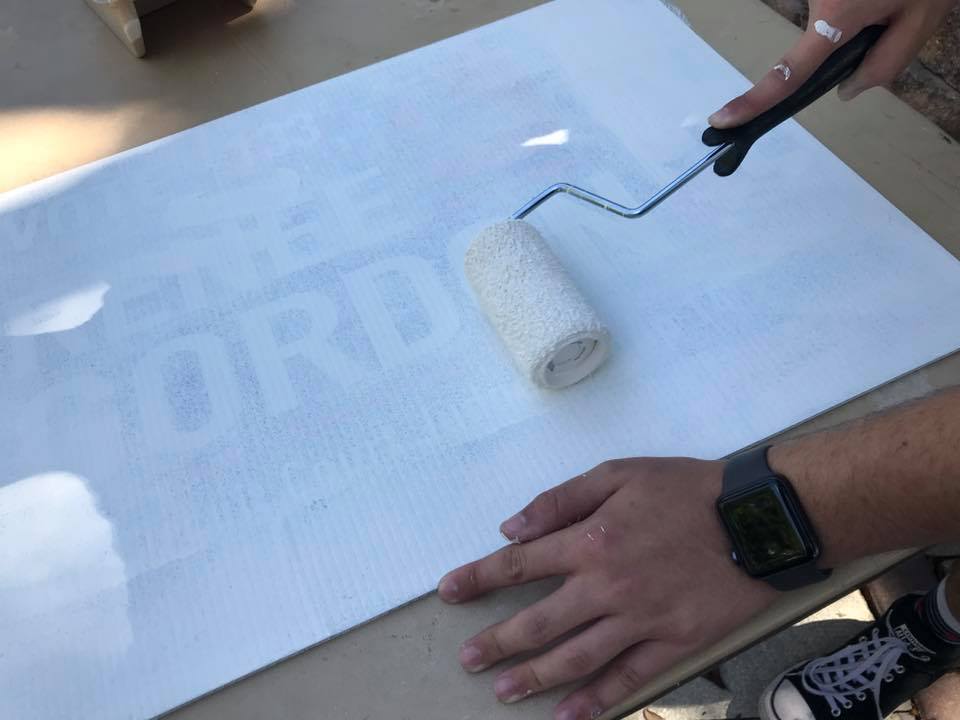 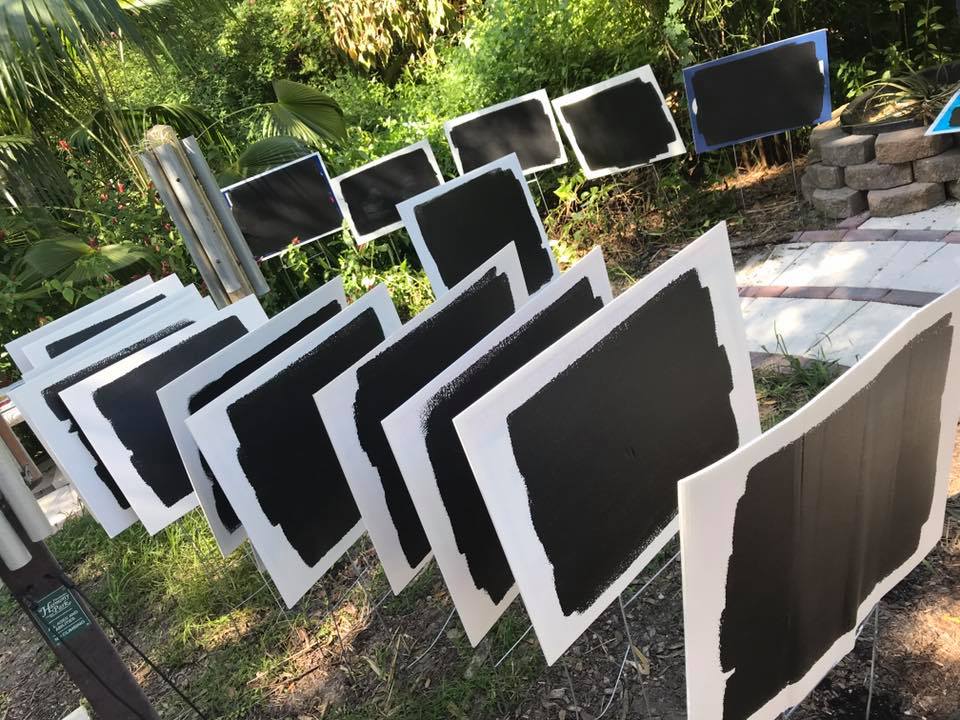 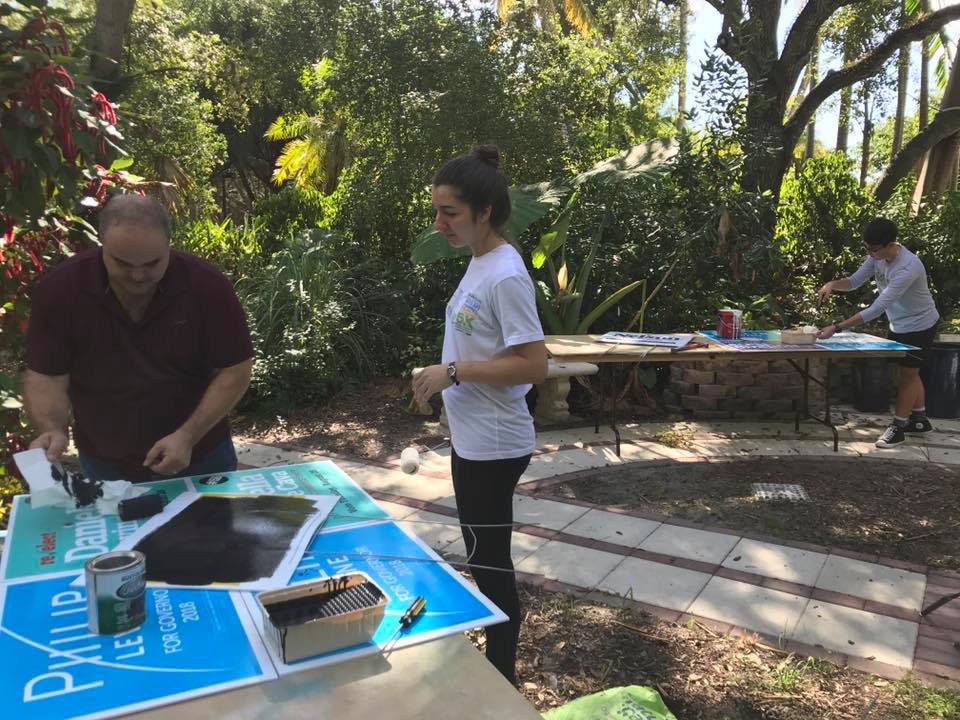 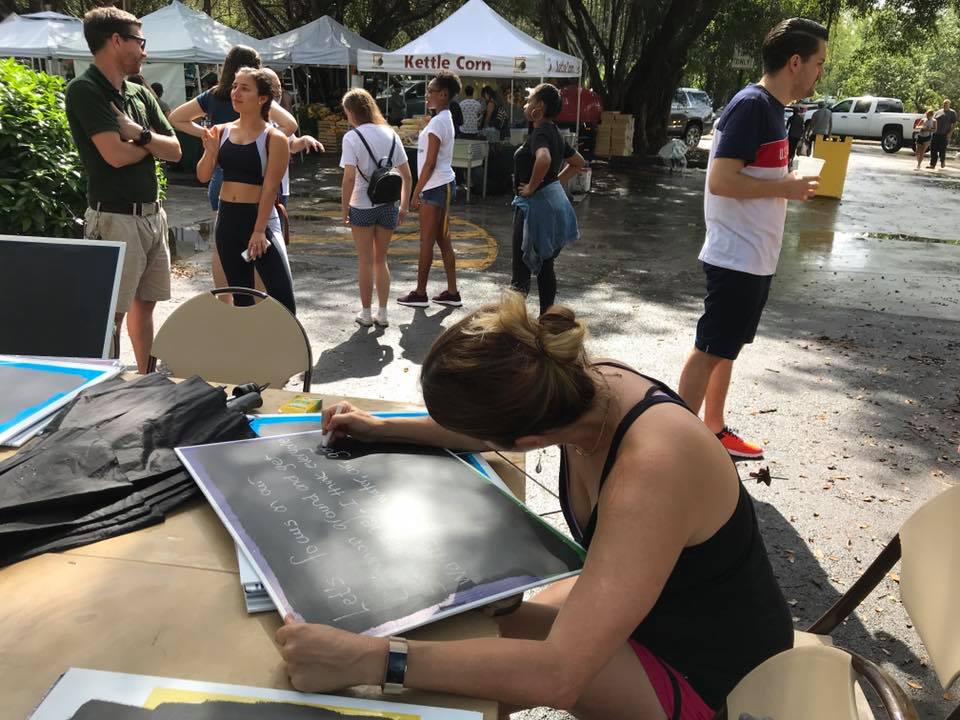 At noon, on January 20th, 2017, I led fellow Miamians participating in the performance of “Oath.”  On a Wynwood street, they read the full text of the United States Constitution out loud.  Together, they took the Oath of Citizen.  I then had them speak their favorite clause from the document they had just read into a water-filled glass and stir it.  They drank the words  with the water, incorporating the document into their very being.
Last year, I created the “Democracy (is an action verb)” art piece as a gift to my city.   It is an owner’s manual —a path teaching us how to care for the breathing, living document we pledged to preserve, protect and defend on Inauguration Day.
Many Miamians come from countries where democracy and the rule of law has failed or is failing. Growing up here, I always imagined our city’s outstretched arms welcoming them (as they did my parents).  Taking them in, bestowing them with gifts of freedom, democracy.   To me, democracy was like sunshine: Gifts we had in abundance. It was a given for all of us.
But, as I grew older and as I’ve seen my nation grow more and more polarized, I’ve realized that its not quite true.  Freedom is not eternal.  Rights can erode. Democracy is difficult, fragile, vulnerable.  Democracy is hard work.  Its not a thing we get by virtue of being American.  But, because we are American, an activity we continuously engage in.
Through my socially engaged practice, I attempt to develop work that helps audiences see themselves as protagonists, problem-solvers. Here, I challenge them to be the change they want to see, to work together to build a more perfect Union.  To animate democracy.
By asking individuals to conjugate democracy as if it were a verb, I ask them to take action to make democracy happen.  And by conjugating the other pronouns, I ask them to engage and also hold all others accountable.
I democracy
You democracy
He/she democracies
We democracy
You democracy
They democracy 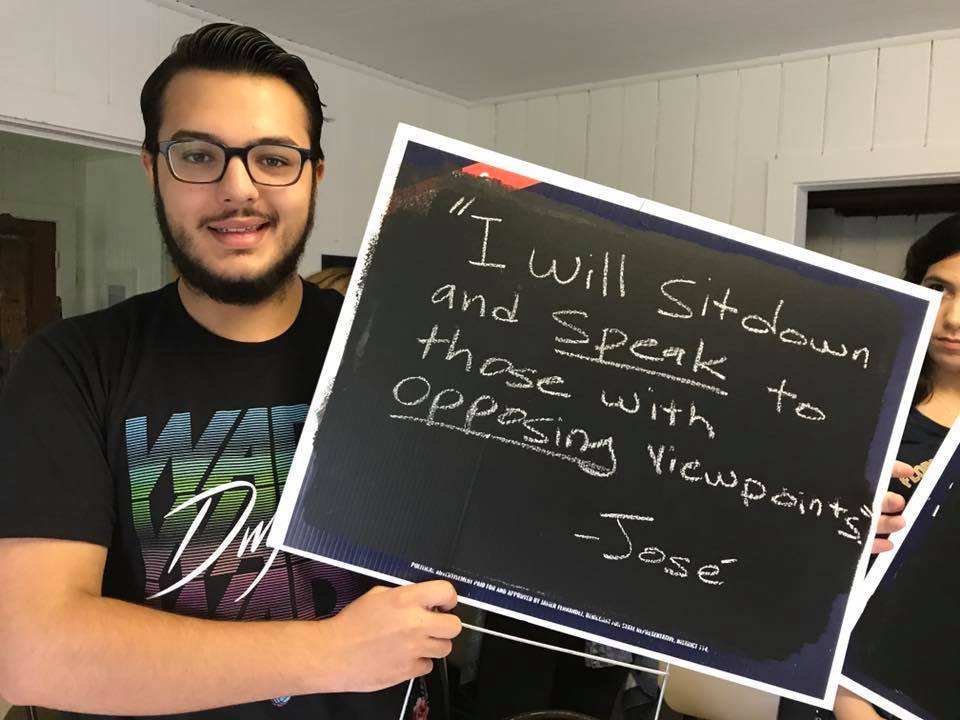 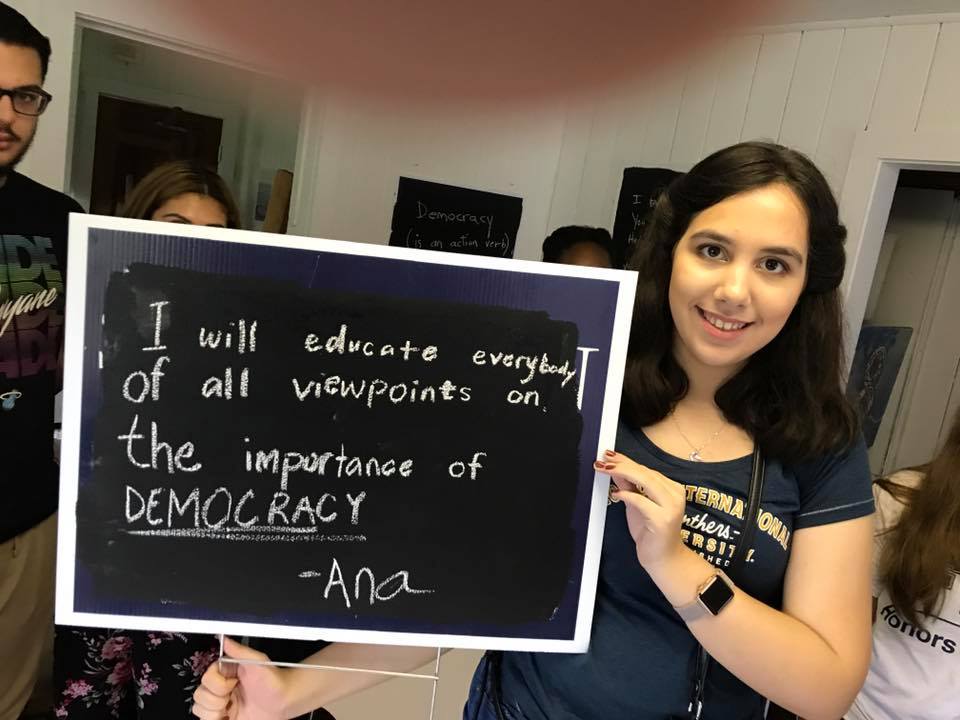 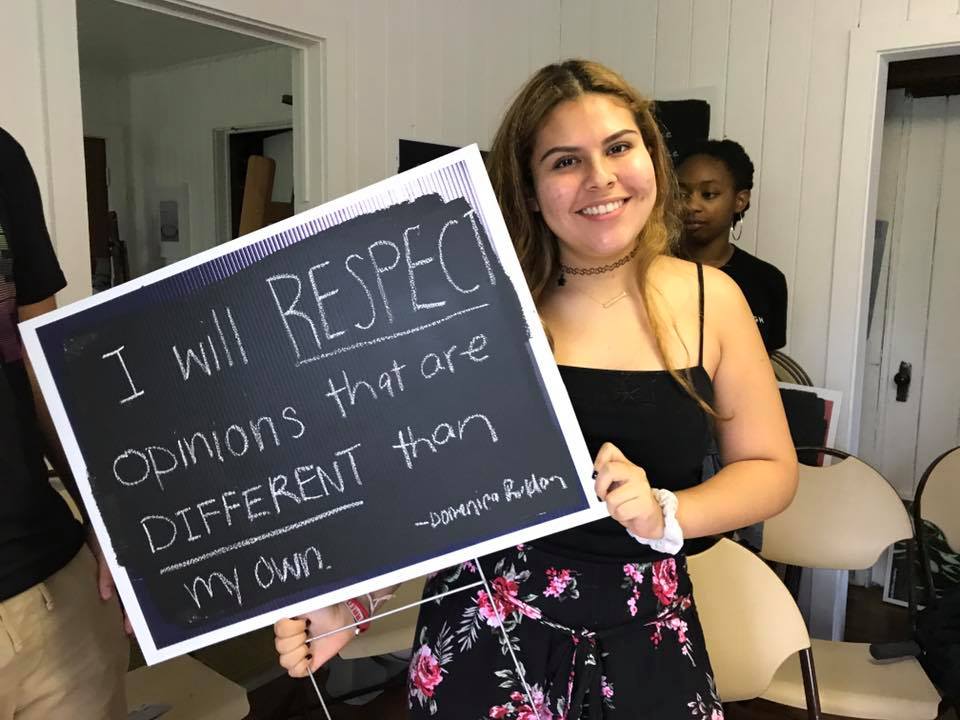 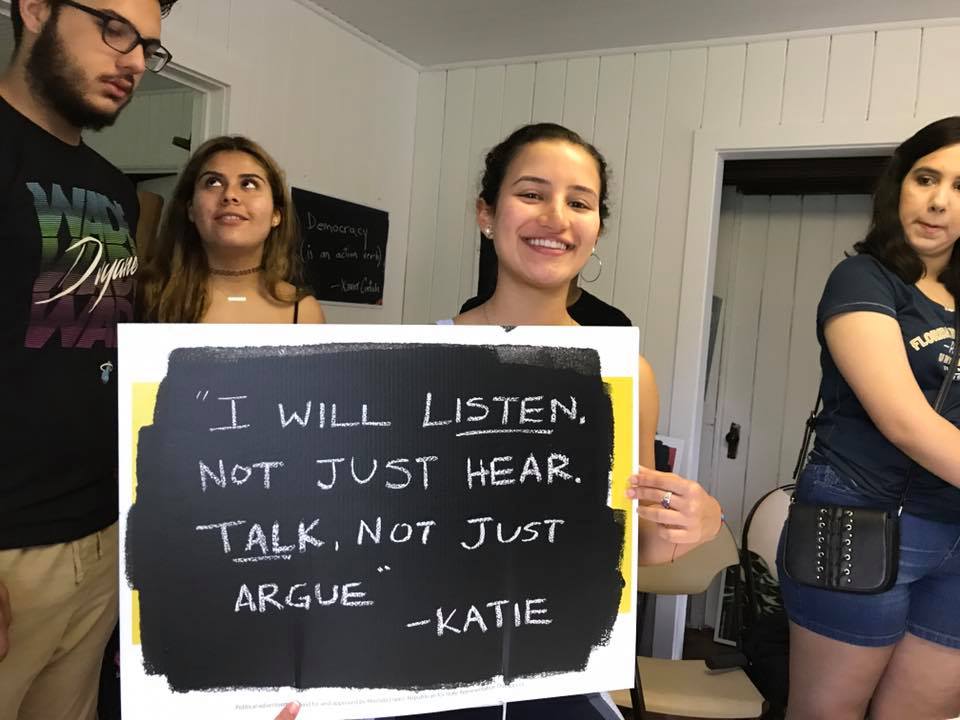