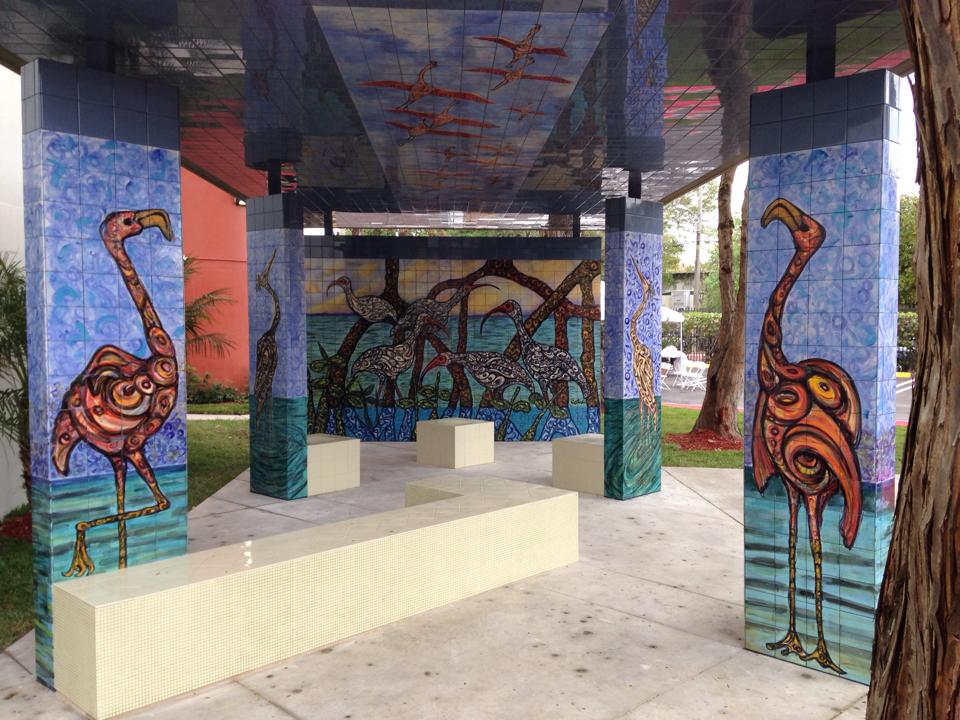 When Ebenezer Stirrup, a Bahamian-born entrepreneur, began building homes in early 20th century Coconut Grove, the Everglades were much closer than they are today. More than 300 species of birds make this area their home. “Snowbirds,” immigrants from the northern U.S., Caribbean basin and other countries, find comfort and beauty here.

The flamingo is the national bird of the Bahamas. It is the bird that helped me conceptualize the entire theme for this public art commission at Stirrup Plaza.

Initially, I thought of creating a 30 foot flamingo at the entrance of this public housing building – a giant version of the tacky plastic lawn ornaments seen all over Florida. I wanted to give the residents a sense of ownership, a sense that they too could put a pink flamingo in front of their house. It would be my way of acknowledging that this was more than just a public housing unit, that it was home.

Importantly, the building is named after Ebenezer Stirrup, a Bahamian, who started coming to Florida at age 15. He eventually made his way to Coconut Grove, before the start of urban development. Stirrup was responsible for building more than 1000 homes, in what is now called the West Grove. Then, it was a mainly Bahamian village. Its residents were the people who worked to transform this land from a pioneering homestead to a city, a metropolis.

As my vision evolved, I thought to use not just the flamingo, but the wading birds that migrate from the Caribbean basin to South Florida as a metaphor for the residents who inhabit this building.

I decided to create this outdoor shelter as a place for the residents to connect with each other and enjoy their afternoons while waiting for family members or friends to visit.  What used to be metal benches covered by a pale green canopy is now an elegant, colorful courtyard that invites the individuals to open a dialogue about the art, themselves, and their history.

Every piece was created uniquely and distinctively. I initially started by sketching the designs; they were then hand painted and hand glazed in my studio, baked at 1940 degrees Fahrenheit, and installed according to my designs.

The wading birds in this courtyard include, flamingos, heron, and ibises.  These are the birds that live in our wetlands nearby and in our Caribbean basin neighborhood.  So, through the work, the residents are connected to natural Florida, and also to where they had created memories before migrating here.

The central image of this courtyard is comprised of ibises frolicking among red mangroves roots. This serves as a nod to my Alma mater, the University of Miami a few blocks south down US1.  The Ibis is the university’s mascot. Being the last animal to leave before a hurricane and the first to return, the ibises stand as a symbol of strength. The flamingos and heron painted on the columns holding the roof were positioned so they greet one another. This creates an intimate space, big enough for a cluster of residents to sit, but also designed for a smaller heartfelt conversation.

This is the first courtyard I have built. It invites people to walk into the art piece.

Conceptually, the residents are walking into the wetland and sitting on the sand amongst the wading birds. This immersive courtyard transports the elderly from their building to nearby wetlands, to the Everglades, to the coastal communities, to Biscayne National Park, to Bear Cut in Crandon Park, a favorite childhood haunt.

I do this to raise awareness about our ecosystem and to engage others in practices that help us protect our natural environments for future generations.

Many of my eco art projects involve community activities. Among them is a piece called Endangered World: Biscayne National Park, in which I had 360 individuals depict animals who struggle to survive.  In 2010, each of the 360 endangered animals was painted on a flag and the flags were installed along a mile long path from the entrance of Biscayne National Park  to the water’s edge, where wading birds live.  Each flag represented a pledge to engage in an eco action to protect the animal depicted on the flag.  The flags were temporary, but my hope is that the eco-actions persist.

I hope that this Wading Birds mural, more permanent than those flags, will inspire viewers to engage in similar practices to lower their carbon footprint and find a better way to coexist with nature.

Upon entering the property, the Wading Birds courtyard announces to visitors that life and art exist harmoniously. This convening place incorporates the namesake of the building, the journey of its inhabitants and the shared history of all South Floridians –  with our neighbors in the Caribbean basin.