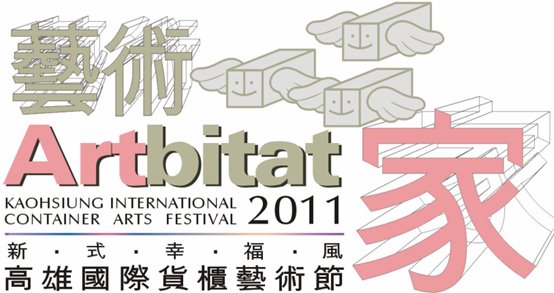 Xavier Cortada created a participatory art installation on the exterior of a container for the 2011 Kaohsiung International Container Art Festival to encourage wildflower reforestation across the island. From December 10th – January 31st, festival visitors entering the container viewed an exhibit about Florida wildflowers (see www.flor500.com) designed by the Florida International University College of Architecture + The Arts Department of Landscape Architecture and its Chair Roberto Rovira. 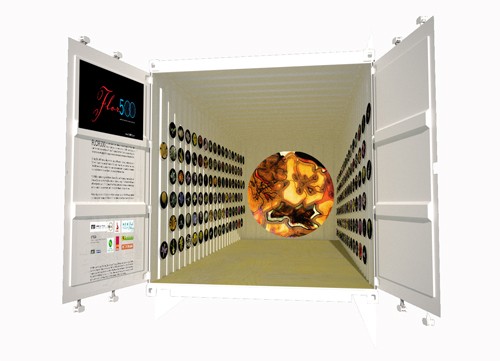 The exterior of the BLOOM container will be surrounded by an installation of cups growing Taiwanese wildflowers (scroll down). From December 10th – January 31st, festival visitors seeing this vertical nursery were encouraged to plant native wildflower –alongside hand-painted green flags– at home.
During December 10th:
Cortada was onsite at the container. Participants hand painted green flags. They were also given plants which they could plant at home alongside the flag and proclaim: I hereby reclaim this land for nature. Participants were then asked to upload their photo at www.nativeflags.org.
The interior of the BLOOM container displayed an exhibit of wildflowers made in Florida designed by the Florida International University College of Architecture + The Arts Department of Landscape Architecture and its Chair Roberto Rovira.

In Spring of 1513, with its flowers in full bloom, Spanish explorer Juan Ponce de Leon landed on the eastern shore of the peninsula where I live. Wanting to claim it for Spain, he named it Florida, from the Spanish word “flor,” or flower.

Thirty‐one years later, Portuguese sailors traveling across longitudes on the other side of the planet, were taken by Taiwan’s natural beauty. They named the place “Ilha Formosa,” or beautiful island.

In time, others followed and eventually colonized both presuming that everything before them ‐‐ from finite natural resources to the lives and labor of the indigenous population ‐‐ was theirs for the taking. It is an approach that endures to this day: The collective need for sustainability and balance is trumped by individuals’ insatiable want for more, more and more.

Almost everything in my home was made somewhere else. It was produced in a land where the cost of labor is cheaper than in Florida. It was manufactured and packed into a container and shipped across the sea, along with its huge carbon footprint. Every day, containers sail across
the Earth’s longitudes filled with products consumers are taught to “need.” Containers filled with products engineered by man for near‐term obsolescence, so that consumers constantly grow their demand for the newer model. The upgrade, the latest thing.

I want us to instead demand things slowly engineered by nature to stand the test of time, products that never lose their usefulness because they are made for a true purpose. Things that are renewable, sustainable. Life‐giving.

I imagine a container of things we actually need. Or better yet, things we shouldn’t rid ourselves from. Things like wildflowers.

Wildflowers magically rise from the soil in a triumphant celebration of color and form. They are architectural masterpieces, miniature cathedrals. Ever building and ever decaying. And ever regenerating themselves again according to plan.

Wildflowers hold medicinal powers to combat diseases we have yet to encounter. To solve problems we have yet begun to imagine.

Wildflowers allow the planet’s pollinators, with whom they co‐evolved through time, to fulfill their joint responsibility of sustaining life’s fragile web. An intricate and complex biological process that makes Earth verdant, sustains all animals (including humans) and balances atmospheric gases (that accelerate global climate change).

Obviously, wildflowers would naturally continue to blanket our planet were it not for the displacement caused by the concrete we’ve poured ‐‐and the parcels we’ve platted‐‐ to grow our society.

Wildflowers allow us to forget who we’ve imagined ourselves to be and instead remind us of
who we really are: Beings made from the same four DNA nucleotides that have given life to
everything that lives, has ever lived or will ever live on planet Earth.

Beings who share the same biology with every other living organism. And, as such, share every
threat.

Beings who understand that our world is global not necessarily because goods are shipped
across expansive oceans but because it is ecologically interconnected and interdependent
across every imaginable expanse, across every longitude.
Understanding this will allow us to ship not just better goods but, more importantly, real
goodness across the Earth.

Goodness in behavior. Goodness in stewardship nurtured by a clear understanding that we
have to live in balance and harmony with the ecosystem that gave rise to and sustains our
species.

We need to better coexist by better tempering our personal demand for excess so that the
greater good wins. So that our growth is managed in a way that sustains not just humans but
all living beings with whom we share (and need for our survival on) this planet. Not just now,
but for generations (and millennia) to come.

We need to see home well beyond our four walls and learn how to coexist with the natural
world.

We need to engage in a new kind of “colonization” – one that uses green flags, not political
ones. One that reclaims Earth for nature.

We need to recreate lost habitats, rehabilitate dwindling ecosystems and engage in sustainable
practices across every single one of the planet’s longitudes.

Indeed, we need to see home as a universe of native wildflowers waiting to bloom.

ABOUT THE WILD FLOWERS

In selecting the native Taiwanese wildflowers to feature in Kaohsiung Container Arts Festival BLOOM project, Miami artist Xavier Cortada has partnered with Dr. Yau-Lun Kuo, who is currently a professor of Department of Forestry at National Pingtung University of Science and Technology. Dr. Yau-Lun Kuo’s field of expertise is Ecological Physiology of Trees, especially in the aspect of photosynthetic research. Projects undergoing include: (1) inhibiting the growth of an invasive species Leucaena by ecological restoration measures; and (2) investigating the photosynthetic potential of native tree species of Taiwan. Other studies of interests extend to forest carbon sequestration, as well as the promotion of an ethnobotanical crop Chenopodium formosanum.

Red chenopodium
Chenopodium formosanum, called as julis by Paiwan aboriginal tribe of Taiwan, is an annual plant with height about 1.5 m. Endemic to Taiwan, this plant has been used as traditional crops by aboriginal people for hundreds of years. Its seeds are highly nutritious and edible. Its colorful inflorescence reveals yellow, orange, red, purple, etc. in color, which is suitable for ornamental purposes and flower arrangement. Unfortunately, the usage of this plant was only known within the aboriginal tribes. The general public has not learned about it.

Taiwan hibiscus
Hibiscus taiwanensis, a small bushy tree endemic to Taiwan. In warm climates it can flower off and on for much of the year, though blooms tend to be concentrated during certain months.Grow in full sun or part shade, it likes water year round, but can last in drier areas for a short while. It also is adaptable to very wet soils that have short periods of flooding. This hibiscus is commonly grown for its ornamental flowers.