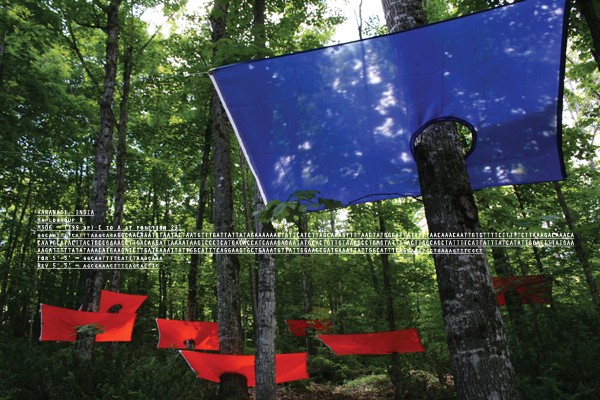 Using a Quebec forest’s trees as geographic markers of present-day nations, Miami artist Xavier Cortada installed 20 flags depicting the route the first wave of humans took out of Africa across the Asian coastline to Australia and beyond. Inspired by the field work of FIU geneticist Dr. Rene Herrera, who uses DNA testing to research early human migration, Cortada color-coded the flags to depict the genetic Haplogroup in the majority of each country’s population.

The installation invites the descendants of those who carved a path through the wilderness 60,000 years ago to re-enter the forest and retrace their ancestors’ path as they populated the planet in response to nature.

A&V is an Upper Division Honors College seminar which examines the vital role visual art plays in the social and cultural dialogue surrounding controversial issues. The heart of the course is the A&V exhibition, an exhibition of contemporary Miami artists organized, curated, funded, and installed by the A&V student-curators.